Overall generally stable avalanche conditions exist in the advisory area but with the widespread glide cracks in popular recreation terrain in the  Treeline (1000′-2500′) elevation band and the possibility of triggering a large cornice fall in the Alpine, the hazard remains at MODERATE.  In addition, lingering pockets of wind slab and loose snow avalanches may be triggered in steep terrain. Practice safe travel techniques and take inventory of surface conditions as a storm approaches for the weekend.    Watch for changing conditions if snow and winds pick up earlier than forecasted.

Due minimal snow coverage and signs of snowmachine impact to exposed vegetation the Seward Ranger District  officially closed the  Primrose Trail access to Lost Lake  yesterday, March 3, 2016.   Thanks to many of you who have made an effort to stay on the trail and to educate others about the consequences of tearing up the vegetation. Until this area recieves more snow the trail will remain closed.

Glide avalanches continue to release and glide cracks are growing daily. An observer on Wednesday noted movement in the Cornbiscuit glide crack over the course of two ski runs. There was glide avalanche that was observed on south face of Manitoba yesterday that occured sometime between 12 pm-4pm. Glide avalanches are still totally unpredictable and travel underneath glide cracks should be avoided.

Recent glide avalanche in the Seattle Creek drainage. This was initially observed Wednesday afternoon and Wendy got a photo of it yesterday. 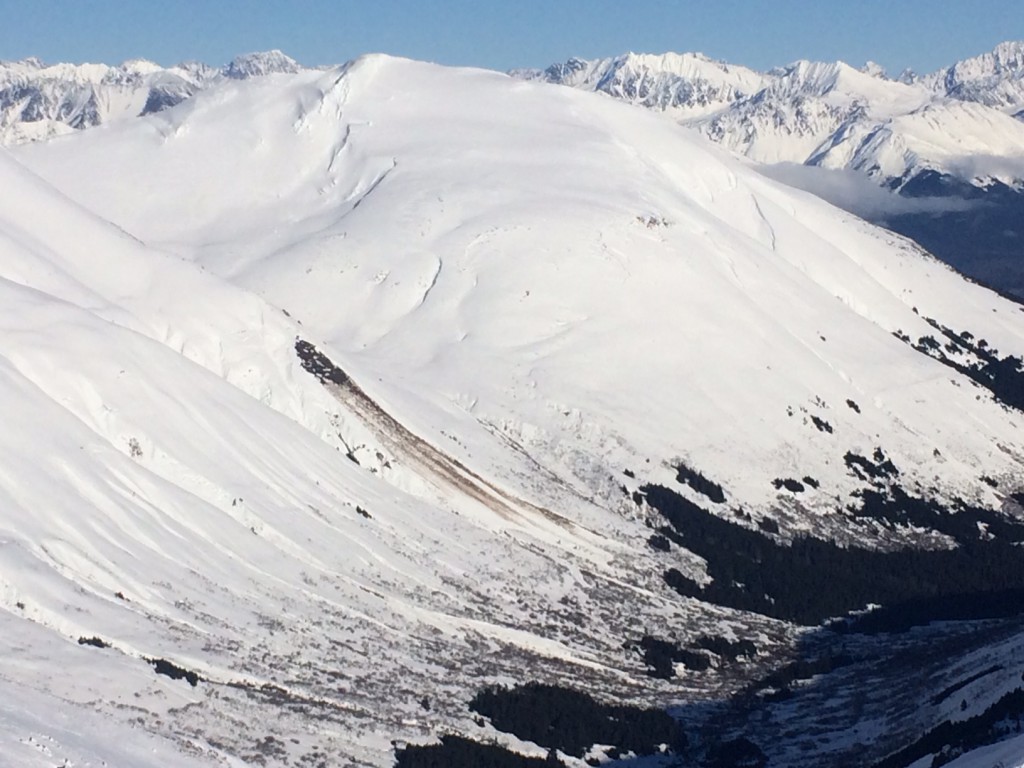 The Cornbiscuit glide crack is huge, growing and scary… It is worth checking out the other photos from the observation on Wednesday. 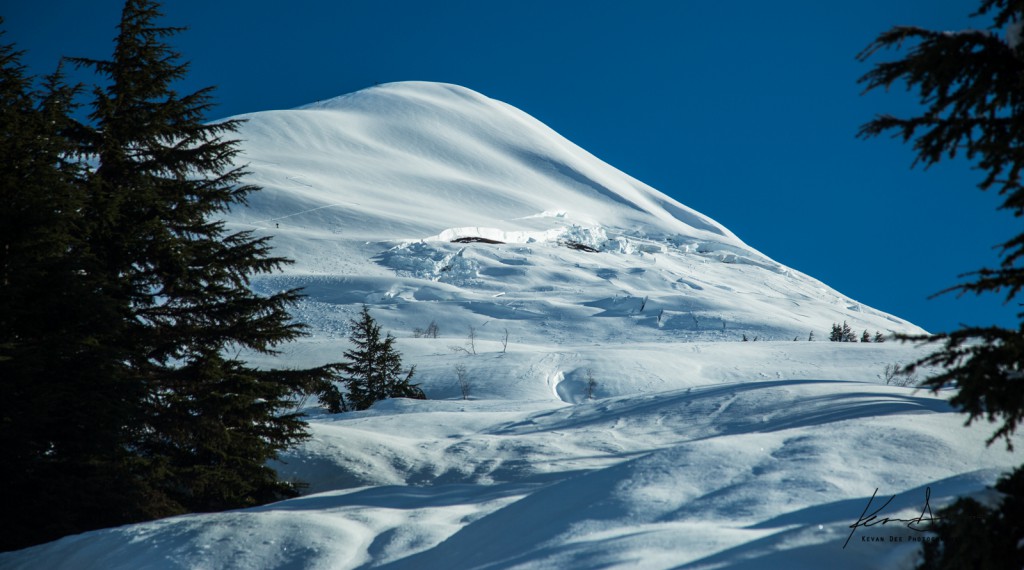 The cornices are impressive and hang over many slopes in the advisory area. There was a report of a snowmachine triggered cornice fall in Warmup Bowl on Wednesday that took the rider by surprise. They luckily did not go over with the falling chunks of snow. Cornices have the potential to be quite dangerous if you take ride with them or if they fall from above onto you. Avoid travel on top, watch for cornice cracks and limit exposure while traveling below. We are not ruling out the possibility of a large cornice fall triggering an avalanche on the slope below due the massive loading potential. 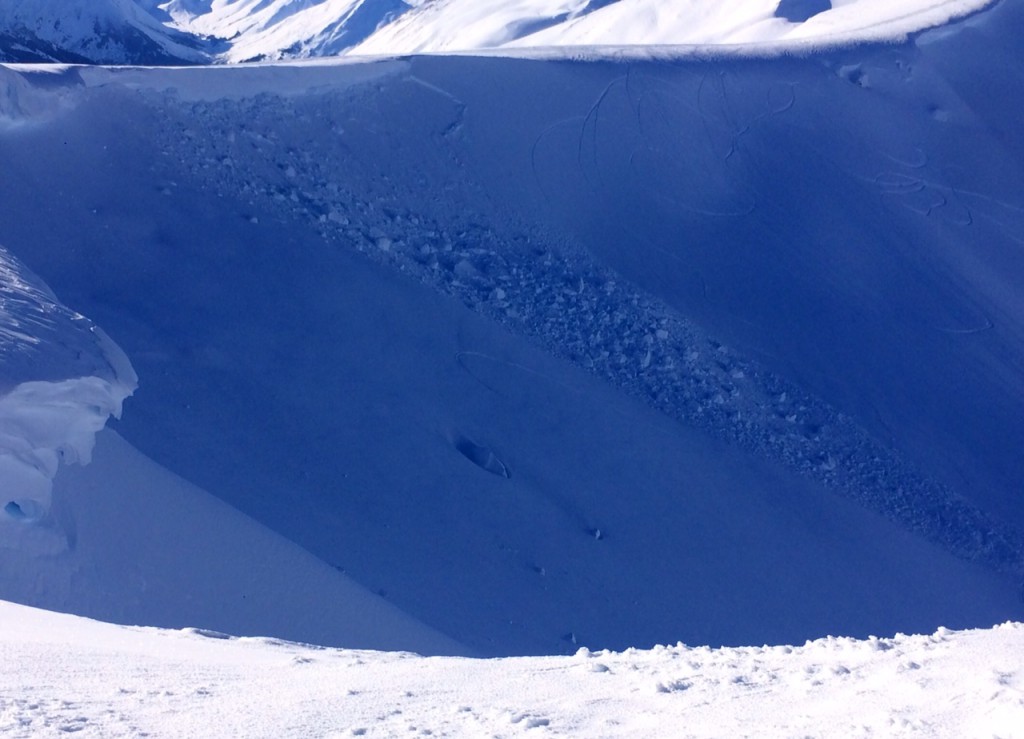 Today is a transitional day as we say goodbye to the sunshine and the clouds move in with the possibility of snow showers. Depending on the thickness of the cloud cover we may still see some surface warming of the snowpack. We have had no reports of human triggered avalanches in the past few days. There is still the possibility of triggering lingering wind slabs in steep leeward terrain, especially unsupported convex slopes. If you are out in the mountains it is worth checking out surface conditions, as these will be what the next wave of snow hopefully bonds to. Southerly slopes have a crust; there have been reports of small surface hoar formation in some areas and in protected areas loose snow is starting to facet. In addition there is a wide array of wind-affected snow at higher elevations and a delightful rain crust lower down.

Loose snow avalanches: Steep protected areas have loose snow that may be enough to push you off your feet if it gains enough force and mass as it travels down slope with you. Manage your sluff by moving out of its path before it hits you. 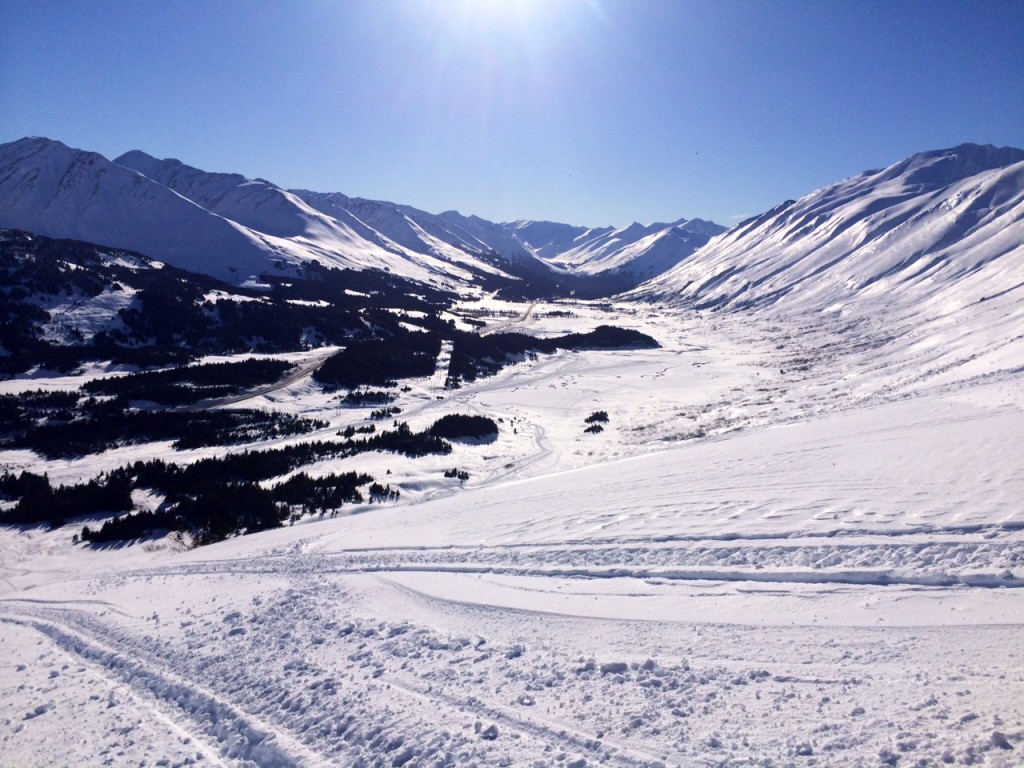 Yesterday was clear and sunny. There were some patches of valley fog. Temperatures were in the mid 20Fs to upper 30Fs. The winds were light and easterly. Temperatures dropped into the high teens to mid 20Fs overnight.

Today will be mostly cloudy with a chance of snow in the morning, increasing in the afternoon. 0-3″ of snow is possible. East winds will be light and temperatures will be in the mid 20Fs to 30Fs.

Rain and snow showers are forecasted tonight and tomorrow. This pattern will continue through the weekend as a low in the Gulf spins a series of weather systems into the area.