Today a  MODERATE  avalanche danger exists in the Alpine and at Treeline. Triggering an isolated wind slab is possible on steep wind-loaded features. In places protected from the wind, loose snow avalanches could be fast moving and easily knock you off your feet in steep terrain. In the mid-elevation band (at Treeline), glide cracks pose a significant threat as they continue to grow and release. Avoid travel underneath them.

A  LOW  avalanche danger exists below 1000′ where triggering an avalanche is unlikely.

If you are thinking of going to Summit Lake, be aware that different avalanche problems exist within the snowpack. Click  HERE  to read the Summit Lake Summary from this last weekend.

Wind slabs: Over the last few days several wind events combined with over a foot of new snow have created wind slabs up to 20” thick on leeward features. The good news is this new snow seems to be bonding well with the old snow below, however not enough time has passed for this hazard to have completely healed. Yesterday we received reports of skiers triggering pockets of wind slab on steep wind-loaded slopes. Trigging an isolated wind slab in the wrong place, like over a cliff or above a terrain trap, could have high consequences. As wind slabs get older they get stiffer and may allow for travel out onto them before they release. Watch for shooting cracks and avoid hollow sounding snow.

Cornices: Already large cornices have received additional stress from the new snow load and strong winds earlier in the week. These have a tendency to break farther back than expected and can send you for an undesirable ride.  Approach ridgelines with caution and avoid being on or directly below cornices features.

In places protected by the wind 12” of loose unconsolidated snow could be fast moving in steep terrain. Loose snow can easily knock a person off of their feet or take them for a ride over a cliff or into a terrain trap. Manage your ‘sluff’ and avoid terrain features with high consequences. Skiers have reported being surprised by these conditions over the past couple days.

Today at Treeline (the 1,000’ – 2,500’ elevation band) on all aspects, pay attention to and AVOID glide cracks. These can lead to glide avalanches that are very unpredictable as we have seen over the past few days. Yesterday there was a large release on the South face of Sharks Fin. The cracks on Corn Biscuit were recently observed and continue to grow.  There is no discernable pattern to predict a failure, as they tend to fail naturally and on their own schedule. Warm temperatures can trigger them and so can cooling temperatures. Cracks can form and release in seconds or days later or sometimes a glide crack won’t release at all. The new snow has made it harder to see the existing cracks and glide releases in the terrain.

It is best to give glide cracks a wide berth.  AVOID spending time underneath and if skiing or riding in terrain with glide cracks, try and map them out before your travels so as not to end up directly on top of or inside one.  Remember, when these do fail, they tend to be destructive, failing to the ground and bringing the entirety of the snowpack with them. 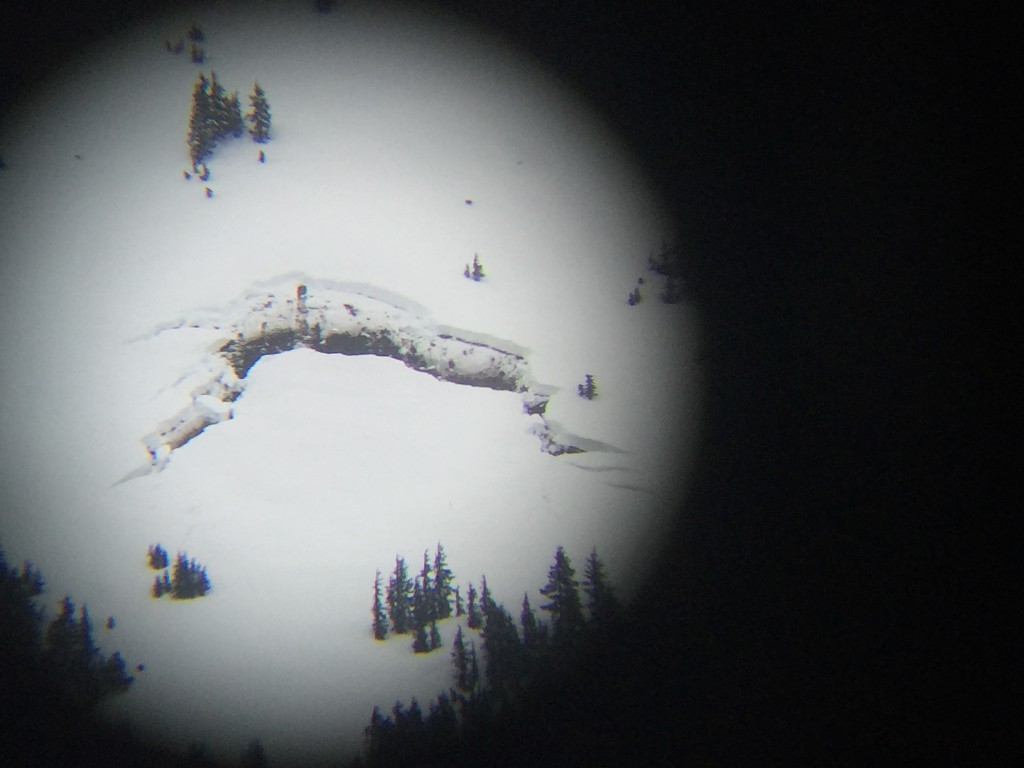 Yesterday was mostly cloudy with light Northeasterly winds. Temperatures were in the mid-20Fs with a warming trend overnight.

Today will be mostly cloudy with a mix of rain and snow showers, 1-3 inches of snow accumulation is possible. Winds will be easterly 10-20 mph. Temperatures will be in the mid-20Fs to mid-30Fs. Snow showers will continue overnight with an additional 2-4 inches of snow forecasted and a slight increase in winds.

A series of low-pressure systems are lining up to impact the area over the weekend and into next week. The NWS is calling this a ‘Parade of Lows’. Expect rain/snow showers and winds to increase as these systems move through.