The avalanche danger is MODERATE at and above treeline today where fresh wind slabs have formed yesterday afternoon/ overnight with the approach of a quick but intense burst of heavy snow and moderate easterly winds.   These will be possible for a person to trigger, specifically in steep, wind-loaded terrain above treeline.  Wind slabs are expected to be in the 12-18 € range.   In the mid-elevation band (at treeline), glide cracks continue to pose a significant threat.   Limiting or avoiding your time spent under glide cracks will be your best bet to mitigate this particular avalanche problem.

Yesterday afternoon/ evening ushered in a quick 8-hour period of intense snowfall in the Turnagain pass area where we picked up around 6” of new snow.  Snow fell in earnest above about 300’ as ridgetop winds kicked up from the northeast.  This new snow in addition to 6-8” of low-density snow from Saturday afternoon/ Sunday morning is enough to build shallow but tender wind slabs on steep, leeward slopes.  Expect wind slabs to be in the 12-18” range and may prove easy to trigger in the alpine.  Above treeline, slopes greater than 35 degrees with a south or west facing tilt will be most suspect today.  How this new snow/ fresh wind slabs bond to yesterday’s surface will be key to watch for and can be sussed out by utilizing quick hand pits or small (no consequence) test slopes.

At and below treeline, the wind is playing less of a role on this new fallen snow.  Expect yesterday afternoon’s storm snow to settle out quickly.  There may be a few point releases or some roller ball activity in this elevation band but the greater concern will be glide avalanches (more on that below). 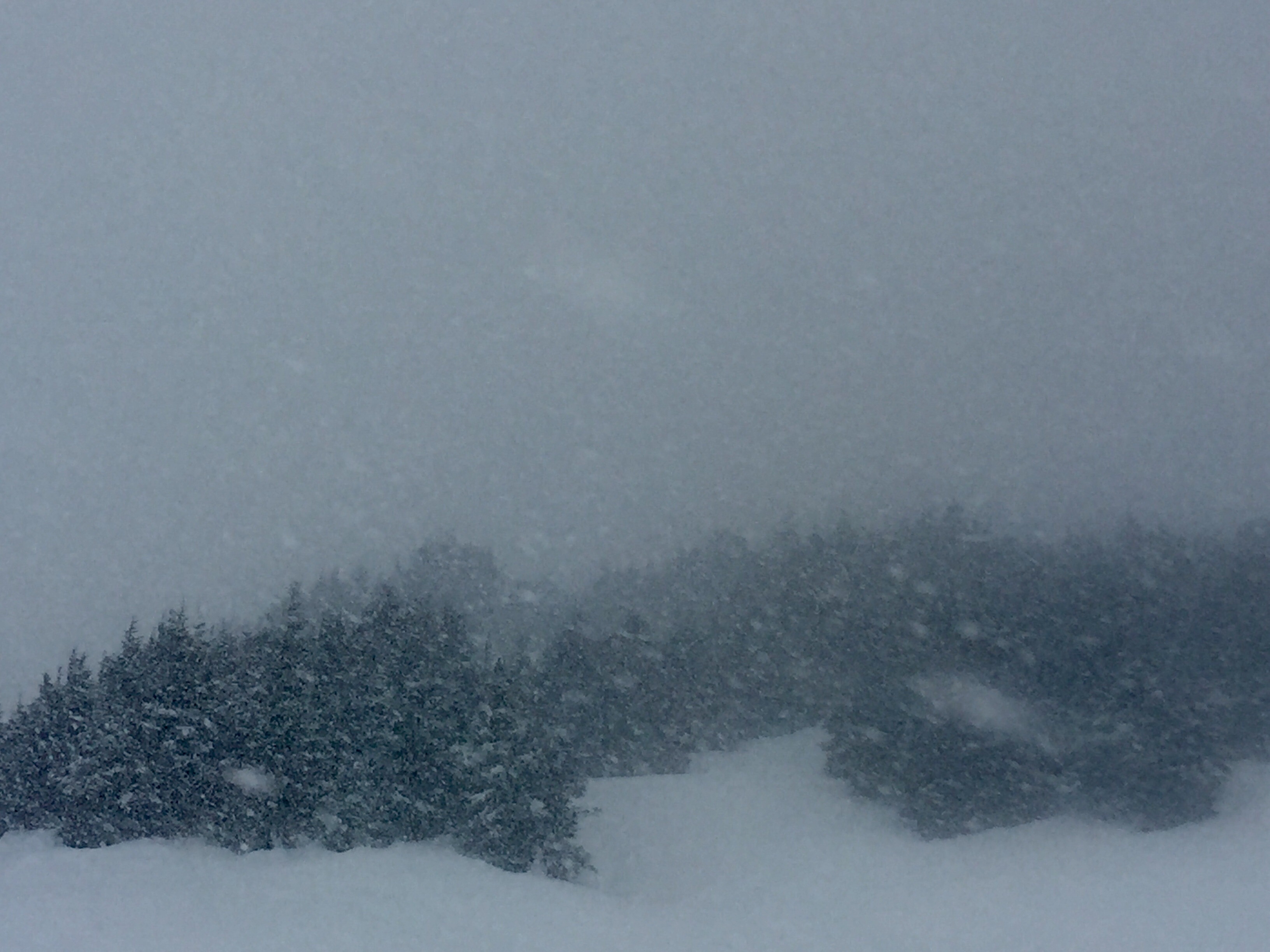 Snowfall rates were intense (1″/ hour) toward the end of the day at Turnagain Pass yesterday.  Rain/ snow line hovered around 300′ with a rain/ snow mix at sea level.

After several days of glide cracks releasing in the Turnagain Pass zone – some of which are ‘front and center’ on Seattle Ridge and visible from the motorized parking lot, we did not see any signs of new glide avalanche releases yesterday. With a fresh dusting of snow though, these cracks are becoming harder to spot as they fill in with new snow.

Glide avalanches, though spooky are a pretty easy avalanche problem to mitigate.  Simple avoidance and limiting your exposure to these large cracks is key. Map out any notable glide cracks from a good vantage that may affect your route, and pick a track that minimizes time spent underneath these.  Though the probability is low that a glide will fail with someone on the slope, the consequences remain dire.  Recent glide avalanches have been quite large and almost always take the entirety of the snowpack (to the dirt) out as they fail.  This is evidenced in the dirty debris piles left behind. 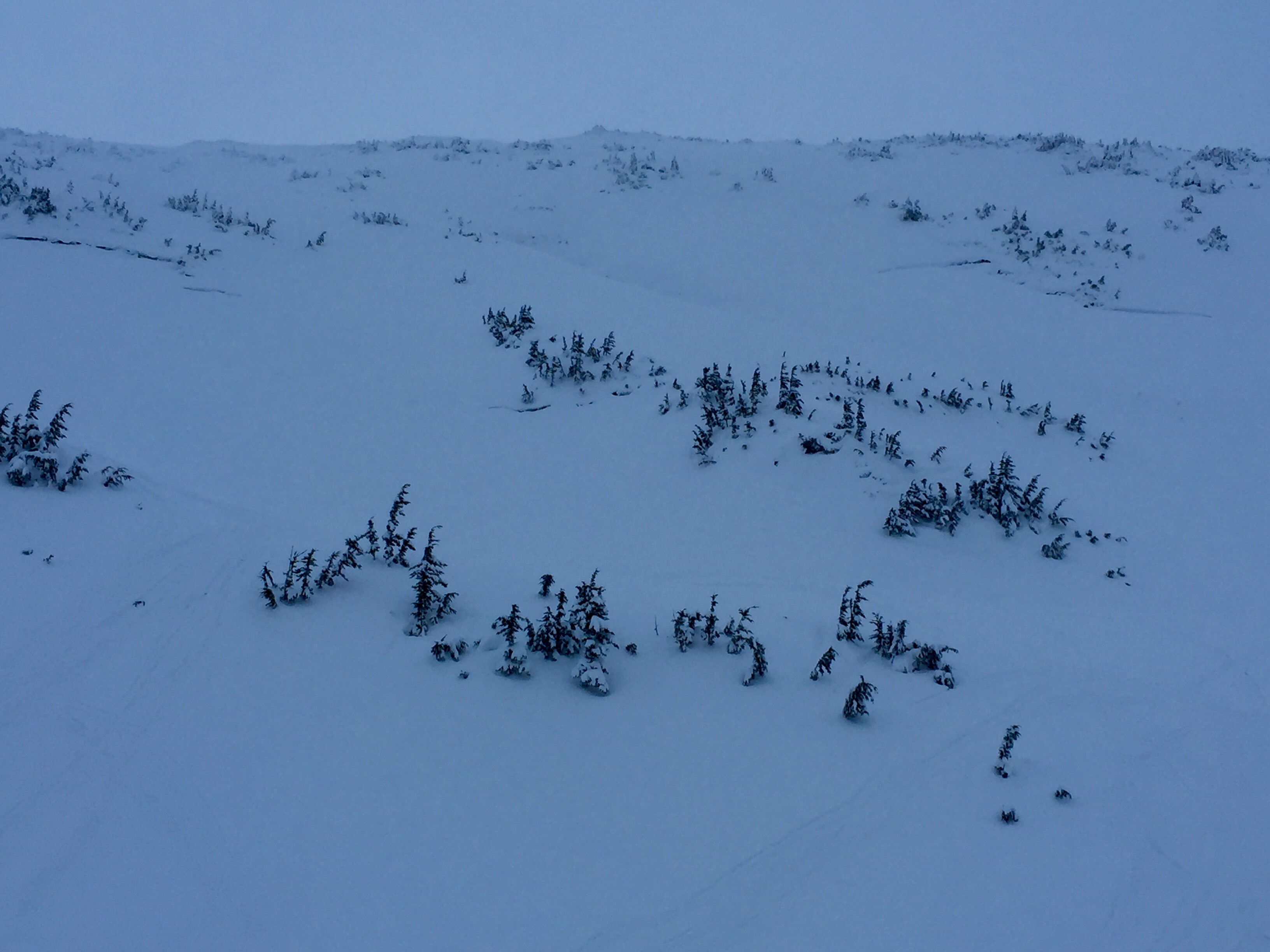 Glide cracks can be seen on all aspects in the mid-elevation band (1500-2500′). Here, 3 separate glide cracks litter an E facing slope in Main bowl. Note: With yesterday’s 6″ of new snow, many of these cracks may be ‘dusted over’ and much harder to see now.

Yesterday started out mostly clear in the morning above about 400′.   Valley fog persisted throughout most of the day around Turnagain arm, Girdwood and Portage Valley where colder air was pooling.   Meanwhile, ridgetop temps were nearing the 32 degree mark at 3800′ (Sunburst).   Winds were light from the East picking up around 3pm (30’s mph with gusts in the 50’s) as a weakening low pressure system rolled through the advisory area.   Clouds were on the increase throughout the day and snow began falling around 3pm.  Snowfall tapered off before midnight with about 6″ falling at the Pass and a rain/ snow mix below 300′.

Today we can expect mild weather during the daylight hours with temps in the mid-30’s at 1,000′ and ridgetop winds less than 20 mph.   We may ring just a trace of precip out of some departing clouds this morning, but don’t expect it to amount to much.

Tonight and into tomorrow morning looks to be almost a carbon copy of yesterday afternoon’s short but intense burst of snowfall meaning we may wake up to a few more inches of snow in favored areas such as Turnagain pass by Wednesday morning.