A  CONSIDERABLE  avalanche danger exists in the backcountry today above 1,000′.   Strong winds and new snow have added substantial weight to a tenuous snowpack with known weak layers where potential exists to trigger a wind slab 3+ feet deep on leeward slopes (West and South).   Cornices are also growing quite large and are a legitimate concern whether you find yourself above or below one of these behemoths.   Cautious route finding and conservative decision-making will be essential today as you move through the backcountry.

Below treeline the danger is  MODERATE  specifically in channeled terrain where an avalanche releasing high above you can run into the low elevations.

FCNFAIC is now accepting applications for TWO NEW scholarships! Both scholarships are for avalanche education up to $500. One will be awarded to a snowmachiner and the other to a skier or non-motorized user.

Please include in your application: name, mailing address, your financial need and how you plan to spread avalanche awareness to your community post-award.   Applications due by 10PM on January 6th.   Please send  your applications to  chugachavyfriends@gmail.com

The Friends-CNFAIC board  looks forward to hearing from you!

A 112mph gust on Sunburst yesterday and a flipped over tractor trailer on the Portage Valley Highway are both indicative of a wind slab issue today.  Winds were primarily out of the ENE yesterday and overnight meaning slopes with a south and westerly tilt will be most suspect for triggering a wind slab.  Strong winds such as this have a tendency to build wind slabs mid slope (further from the ridge crest).  For skiers this means that mid-run you may find yourself on the slab; and for snowmachiners who generally attack a slope from the base, recognize that wind slab may be mid-hill climb, well below the ridge crest.

Watch out for any obvious red flags today such as whumphing, shooting crack or recent avalanches.  Whumphing was present for several groups yesterday and is indicitive of a weak layer collapse.  Sometimes this is harder to identify from your snowmachine but it’ll be worth the time today to slow down and keep a keen eye/ ear.  As wind has a tendency to distribute snow unevenly across any given slope, a skier or snowmachiner is more likely to influence the weak layer in these areas where the slab is thinner.  Shallow spots near rock outcrops or alder will be the more likely trigger points where your skis or snowmachine track is physiclly that much closer to the weak layer. 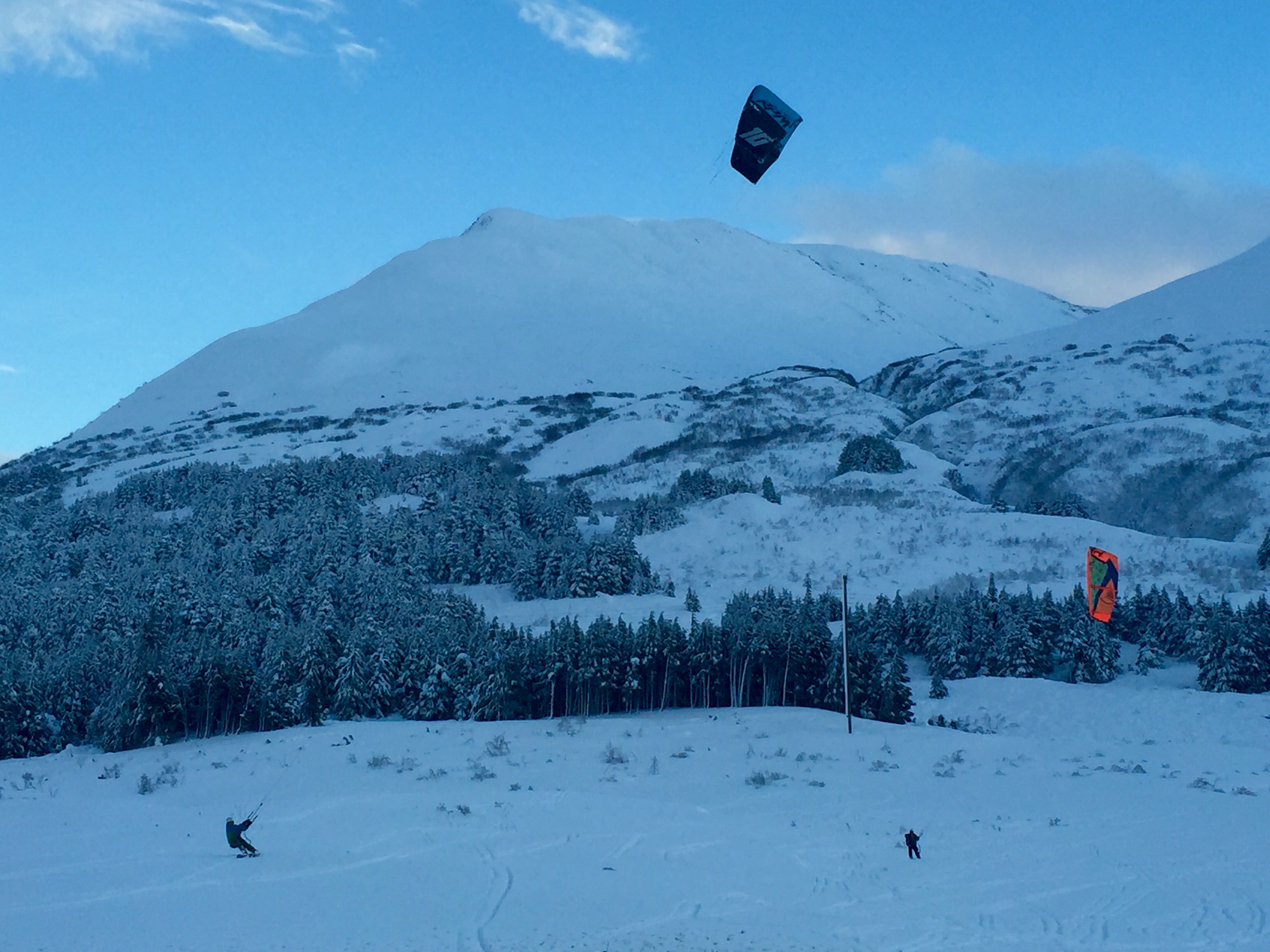 Folks were generally keeping terrain choices mellow yesterday, including these two kite skiers capitalizing on the sustained winds yesterday afternoon in the shadow of Sunburst.

These warm, windy storms have a tendency to grow cornices rapidly here in the Chugach and Kenai mountains.  These ‘backcountry bombs’ deserve an extra wide berth today and throughout this “New Year storm cycle”.  A cornice breaking either naturally or from human traffic has the potential to trigger a large avalanche as it falls on the slope below.  Limit time spent below a cornice and if travelling along a ridge, stay back waaaaaay further than you think necessary to give yourself that added margin of safety.

Given the current structure of our snowpack, we have reason for concern as these potent late-December storms are falling on top of a couple of older known persistent weak layers.  With more weight in the form of snow and wind yesterday and today, these weak layers can edge closer to their point of failure, laying in wait for a trigger.  Yesterday, Alaska Railroad avalanche reduction crews had several avalanche results using explosives to trigger these weak layers.  They saw debris running to the valley floor in channelized terrain.

Heavy snow and strong northeasterly winds on Turnagain pass subsided around 3pm yesterday after a 112mph gust on Sunburst and 4-6 € of heavy, wet snow fell at 1,000′.   Skies broke apart allowing a brief glimpse into upper elevation start zones.   Temperatures hovered right around 32F at 1,000′ and 35F at sea level.   Rain and strong winds persisted throughout the day in the Girdwood and Portage valleys.

Today we can expect temperatures in the mid-30’s and ridgetop winds from the SE in the 20-40mph range.   Cloud cover will be on the increase throughout the day and precipitation in the form of a rain/ snow mix at 1,000′ will be light during daylight hours and increasing tonight.

Late tonight and into tomorrow we’ll be feeling the full effect of another powerful and unseasonably warm and windy Gulf of Alaska storm.   The NWS has issued another high wind warning that goes into effect tomorrow morning.