The avalanche danger is LOW across the forecast area at all elevations today.   In addition to early season hazards below 1500′, potential cornice fall (on well-traveled ridges) and glide avalanches in the mid-elevations (2,000 €“ 3,000′) will warrant attention today.

Soft surface snow on a supportable crust does exist above 2500′, making for fun powder skiing in the upper elevations.

Mark you calendars for January 23rd when the APU Outdoor Studies Department and Alaska Avalanche School present  Winter Wildlands Alliance’s Backcountry Film Festival!! A night of entertainment, raffle prizes and a chance to rekindle our winter stoke is on tap. This is an AAS and F-CNFAIC fundraiser – a great way to support local avalanche education and information. Hope to see you there!

Do you ski or snowmachine in Hatcher Pass?   The Hatcher Pass Avalanche Center (HPAC) and the Alaska Avalanche School (AAS) are leading an Observer’s Workshop for backcountry enthusiasts who are interested in submitting snow and avalanche observations to the HPAC.  More info can be found by clicking here.

Still one of the greater hazards if venturing into the backcountry on skis today is the ingress/ egress to get on snow and then back to your vehicle at the day’s end.  Ice, alder, open water and a general lack of snow below 1,500’ all add up to be the greatest challenge you are likely to encounter in the backcountry today.  Avalanche problems that call for increased awareness and attention today include:

Cornices have grown quite large along some well-traveled ridges in Turnagain pass right now.  Do not trust these backcountry bombs.  Stay well back from corniced ridges and make sure your partners are doing the same.  Every year, cornices catch both professionals and novices’ off-guard as these have a tendency to break much further back on a ridge than you may expect.

Glide cracks are still proving active across the advisory area either further opening up or releasing entirely causing large, destructive avalanches.  Similar to cornices, do not trust a glide crack.  Though moving at a glacial pace, these are totally unpredictable and can release suddenly and without a real trigger.  It’ll be important to continue to limit your time spent underneath any known glide cracks today and for the remainder of the season. 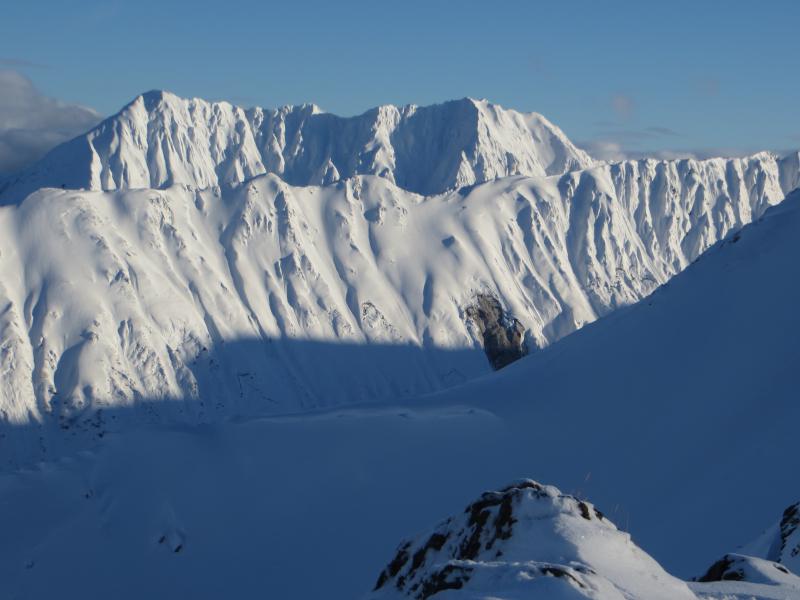 Glide crack below Eddie’s ridge is suspected to have released at some point over the last 3-days without any real trigger.  Notice the dark bed surface in the center of the frame, just above the shadow line.  photo: Wendy Wagner

Any winds above about 20mph will have the potential to build shallow wind slabs today as the surface snow in the upper elevations is ripe for transport.  Pay attention to the surface, if you see any snow being transported from wind, shallow slabs (6” – 8”) are forming on leeward slopes.

Sunny skies dominated the forecast area again yesterday above a shallow layer of valley fog.   The forecasted North winds never really showed up as ridgetop winds averaged in the single digits all day.   Temperatures stayed cool with low 20’s F at ridgetops, cooling off to the mid-teens later in the day at 1,000′ as an inversion began to set up.

Today expect more of the same in terms of clear skies above low-level fog.   Temperatures are inverted this morning with 10 degress F at 1,000′ and 20 degrees F at the top of Sunburst (3800′).   Winds are expected to be light out of the North in the 7 €“ 15mph range.

I am pleased to report that he National Weather Service is issuing a SPECIAL WEATHER STATEMENT  for €œWinter arriving in Southcentral Alaska €.   Confidence is increasing that there will be a significant change in the weather pattern in the form of accumulating snow and dropping temperatures Thursday night and into Friday!