Pockets of  MODERATE  avalanche danger continue in the Alpine (above 2,500′) for lingering wind slab avalanches. These older wind slabs are roughly 1-2′ thick and most likely to be triggered in steep upper elevation start zones – approaching 40 degrees or steeper. A  LOW  avalanche danger exists at Treeline (1,000-2,500′), where dust-on-crust conditions prevail. The exception will be glide avalanches, which are possible throughout the forecast area below 3,000′.

Early season conditions remain and  are hazards to contend with in the lower and mid elevations. These include  rocks, stumps, icy vegetation and open water.

The CNFAIC Avalanche Rescue Workshop scheduled for today has been canceled due to lack of snow at the road elevations on Turnagain Pass. The next hands-on rescue workshop is scheduled for Saturday February 7th. Let’s hope this one will be a go!

Mark you calendars for January 23rd when the APU Outdoor Studies Department and Alaska Avalanche School present Winter Wildlands Alliance’s Backcountry Film Festival!! A night of entertainment, raffle prizes and a chance to rekindle our winter stoke is on tap. This is an AAS and F-CNFAIC fundraiser – a great way to support local avalanche education and information. Hope to see you there!

Lingering wind slabs formed during last Wednesday and Thursday’s storm, along with continued strong Easterly winds on Friday, will be the primary avalanche problem in the backcountry. These slabs are roughly 1-2′ thick and composed of hard/dense snow. They are confined to elevations above 3,000′ just off ridgelines and in other catchment zones such as cross-loaded gullies. With a dusting of 1-3″ of low density snow in the past day and a half, they are likely to be somewhat obscured. They are also likely to be quite stubborn and hard to trigger and will most likely take slope angles approaching 40 degrees or steeper to get them to pop out.

If you find yourself venturing into high elevation more extreme terrain, remember your safe travel techniques – mainly exposing one person at a time on a slope. These slabs are hard so pole tests may not tell you much. Also, other red flags such as shooting cracks and hollow feeling snow may not be present until it’s too late. 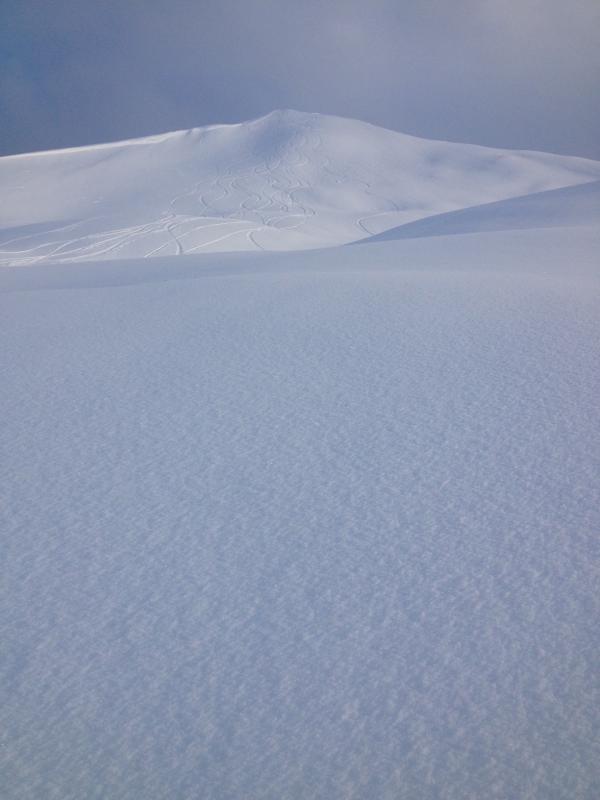 Although glide activity appears to be slowing down in the region, cracks are likely still opening and the possibility remains for these to avalanche. The most recent glide avalanche is suspected to be in the past 48 hours. This was in upper Lyon Creek on a West aspect (photo below, taken looking East from Tincan). Most of the activity we have seen has been in the 2,500-3,000’ elevation band and on all aspects. Glide avalanches are unpredictable and are best managed through avoidance, as they can release at anytime. If you are traveling along valley bottoms watch for cracks above and limit your exposure when passing below them.

Most recent suspected glide avalanche in the Turnagain Pass region below: 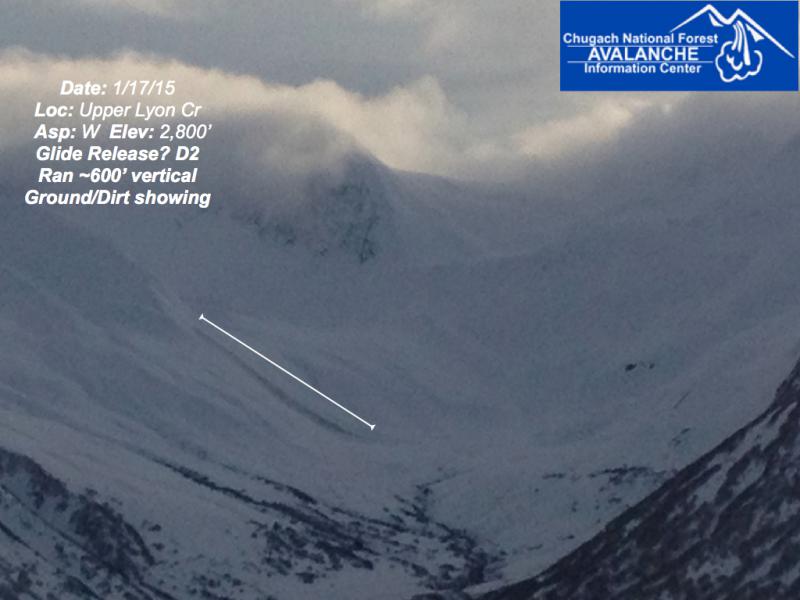 A welcome 2″ or so of new snow fell yesterday during the early morning hours above 1,500′, which was followed by gradually clearing skies and light Easterly winds. Overnight, we have seen an additional trace  of new snow down to 1,000′ on Turnagain Pass. Ridgetop winds have remained light from the East while temperatures have stayed cool, mid 20’sF on the ridgelines and 32F at 1,000′.

Today, we can expect intermittent cloud cover and snow showers throughout the Eastern Turnagain Arm zone with the rain/snow line hovering just above sea level. Snow accumulations are expected to be small, around 1″. Ridgetop winds should be light and variable and temperatures look to stay in the mid 20’s F on Ridgetops and around 34F at 1,000′.

For Monday, we should see the cooler air, light variable winds and partly cloudy skies continue with little to no precipitation. Our next shot at precipitation looks to be Wednesday. Stay tuned.