Today the avalanche danger is LOW with areas of MODERATE danger in the Alpine above 2500′. Triggering an avalanche 1-3′ deep remains possible in very steep terrain and where the snowpack is shallow. Evaluate the snow and terrain before choosing to ski a steep slope.

At treeline triggering an avalanche is unlikely, therefore the danger is LOW.

Support your local avalanche center by making a donation to The Friends of the Chugach National Forest Avalanche Information Center with Pick, Click, Give. The F-CNFAIC is a community supported non-profit organization dedicated to enhancing avalanche awareness in Southcentral Alaska through information, outreach, and partnership. Click HERE to make a donation and read about future projects the F-CNFAIC is working towards.

Join us for our final  Fireside Chat this Thursday, January 8th,  in Anchorage! Topic: Mountain Weather and Snowpack.   CNFAIC forecaster and resident meteorologist Wendy Wagner will be taking a close look at the current state of the snowpack at Turnagain Pass along with a look into “when is it going to snow?”.   Cost is $0.

A large wind event last week has left the slopes scoured on ridges with hard-pack snow conditions above 2500’. This densely settled snow combined with time has added to the strength of the slab by making it supportable and difficult to trigger a buried weak layer below. In general normal caution is advised with the exception of very steep slopes.

Some uncertainty still exists in terrain steeper than 40° and where the snowpack is thinner. The current structure of the snowpack is a 1-3’ slab sitting on a weak layer, and there remains some potential on specific features for a slab to propagate.  Avoid shallow areas of the snowpack, especially near rocks and steep convex rollovers.

In places like Girdwood and Summit Lake where the snowpack is thinner– triggering a layer of buried surface hoar or facets could be more likely. In these areas consider keeping your slope angles even lower.

If you choose to ski a steep slope identify features of concern and the consequences below you. Practice safe travel techniques like exposing one person at time, communicating route decisions, and always be aware of groups above and below you.

Over the last week new surface hoar growth has been widely documented and something to be aware of heading into our next warm storm cycle. A big thanks to everyone submitting observations this winter! 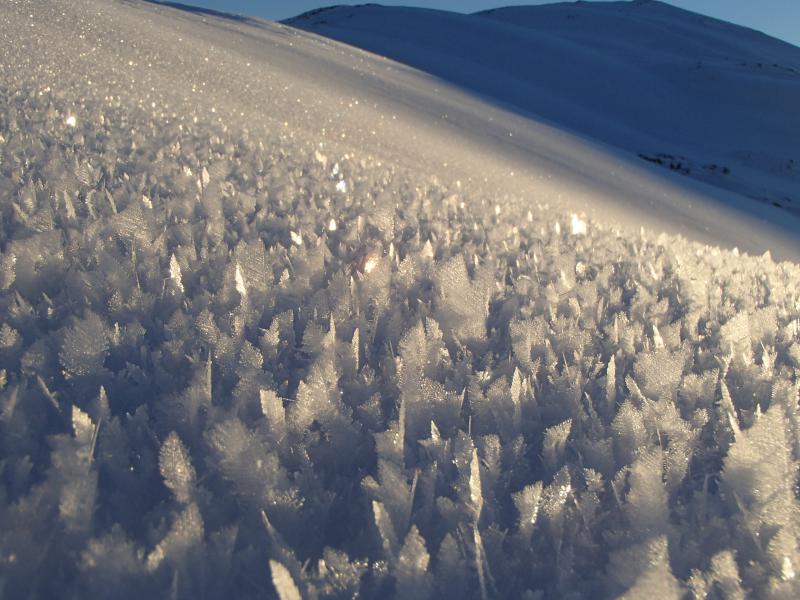 Over the last few days skies have been clear and an inversion has brought single digit F temps to valley floors with ridgetops in the mid 20’s F. Overnight Eastern winds have been light with no new precipitation.

Temperatures are expected to increase into the low 30’s F today as a low-pressure system approaches from Southeast Alaska. Winds will be out of the East 10-20mph. We may see a trace of new snow tonight, but it is more likely to be in the form of freezing rain at sea level.

Overnight and into tomorrow warm air will continue to override the cool surface air in Southcentral Alaska increasing the likelihood of freezing rain at lower elevations. Temps could be as high as the mid 30’s F at sea level with lows in the 20’s F at ridgetops. Winds are expected to be moderate from the East.

It is uncertain how much precipitation this warm air mass could bring, but it looks like lower elevation temperatures will remain warm (mid-high 30’s F) into the weekend.