There is a HIGH avalanche danger in many upper elevation areas (above 2,500′) along the Eastern Turnagain Arm, Girdwood Valley and Turnagain Pass. Very strong Easterly winds along with additional new snow today, will keep the avalanche conditions elevated. At the mid elevations (1,000′-2,500′) there is a CONSIDERABLE danger for wind slab avalanches 10-18″ thick and possibly wet snow avalanches. A MODERATE danger exists in snow-free zones below 1,000′ where debris can run from avalanches occurring above.

As this storm cycle peaks today, travel in avalanche terrain above 2,500′ is not recommended. At treeline, below 2,500′, expert level snowpack assessment, cautious route finding and conservative decision-making is essential. At all elevations, steer clear from gullies and the bottom of large and steep slopes in the event an avalanche occurs above you.

When was the last time you practiced with your beacon? How about that last time you assembled your probe? Don’t be shy – we all know who we are. The CNFAIC will be hosting a FREE hands-on Avalanche Rescue Workshop this coming Sunday at Turnagain Pass!! It’s only 1.5 hours, from 10:00am to 11:30am. Come join in the fun, learn some tips and practice with your gear before heading into the backcountry.

This morning marks the second day of sustained gale force Easterly winds, both along the ridgetops as well as along Turnagain Arm. Snow amounts have been moderate across the region, from ~12″ at the upper elevations along the Arm with only 4″ or less as you move South toward Summit Lake. With warming temperatures today (rain up to ~1,500′), an additional 4-7″ of snow and continued high winds, the avalanche danger is steady and in some areas, on a slow rise.

Wind slab avalanches remain the primary concern. Despite very low visibility yesterday, we did see several debris piles from avalanches beginning at the upper elevations sliding into snow free zones (photos below). Wind slabs can have a wide range of sizes and depths. Many of the small slides are covered up quickly during a storm like this and never seen. The larger ones can produce enough debris that, along roadways anyhow, we can keep tabs. But nevertheless, it’s a good day to avoid avalanche terrain and stay out from under anything above you.

At the mid-elevations (1,000′-2,500′, for example the Tincan Trees) winds slab avalanches are likely to be found in the 10-18″ range. These should be quite sensitive to human triggers due to the freshness of the slabs while the storm continues. If you are headed to this area, careful snowpack evaluation is essential. How low is the wind blowing and redistributing the snow? How touchy are the new slabs? Quick hand pits and probing with your pole can help to suss out how the slabs are bonding. Keep in mind, slabs could be thick and hard to assess without digging deeper, literally.

Photo on left: Debris pile that ran to the road elevation along the Seward Highway, Bird Flats area (South facing 4000′ slope)
Photo on right: Same path (5 fingers) looking from the Hope road, across the Arm. 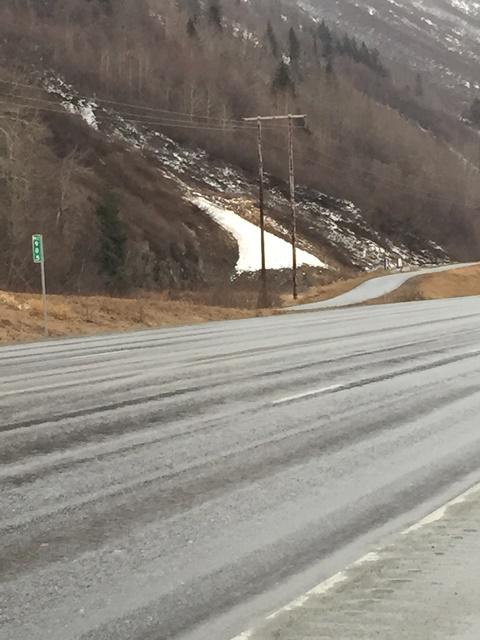 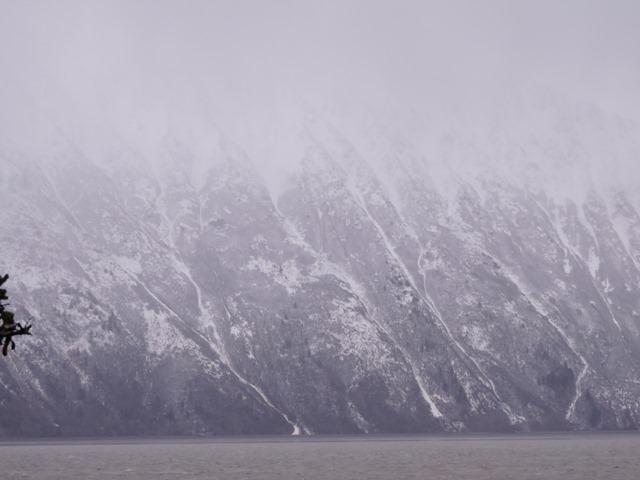 Photo on left:  Seattle Ridge’s far Southerly section across from Spokane Creek.
Photo on right:  Debris in the gut of Twin Peaks, just South/West of the Johnson Pass trailhead. 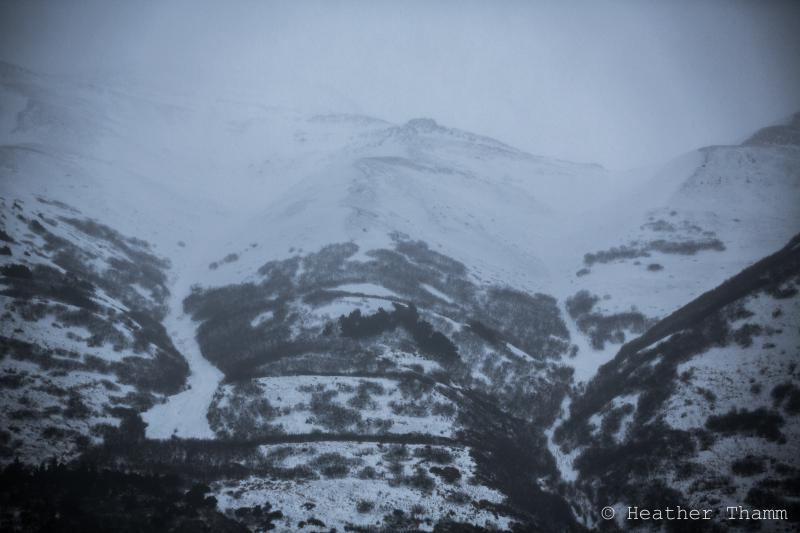 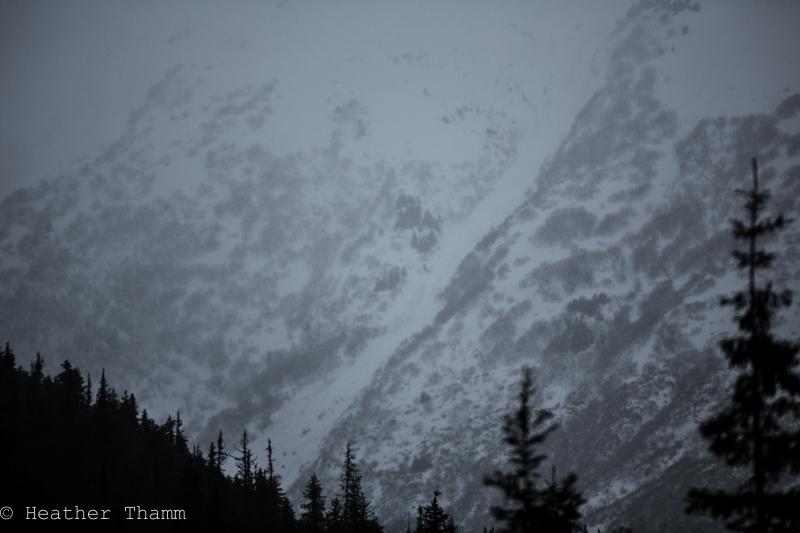 Photo below: West face of Pyramid debris running not quite to the valley bottom. 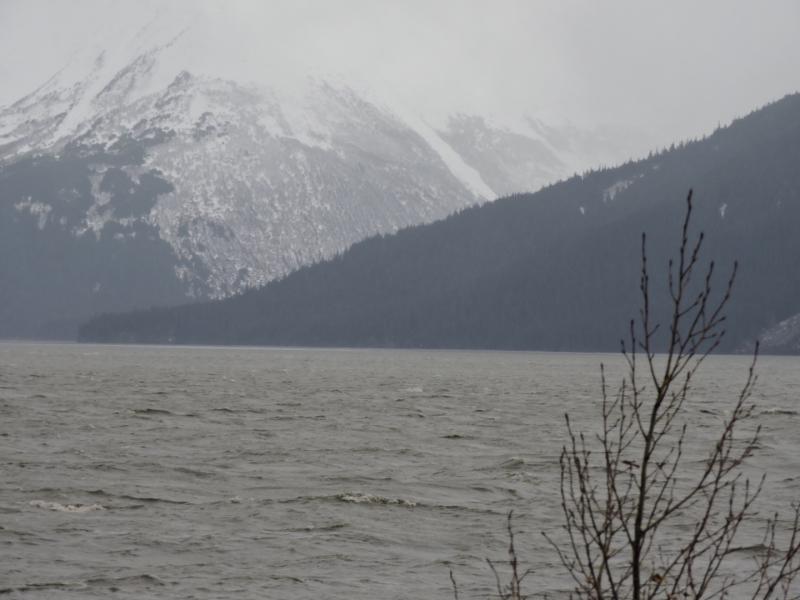 The temperatures are forecast to rise enough today for rain-on-snow up to around 1,500′. Possibly higher. If this is the case, wet avalanches may begin to release naturally in the mid elevations and could run into snow-free areas. We are crossing our fingers this is not the case, as our lower elevations are in dire need of snow!

With known persistent weak layers buried in the snowpack, the possibility exists for very large avalanches to occur. The warm high elevation temperatures (mid 20’sF) make for sticky snow that can allow a wind slab to build several feet thick. This case has the potential to overload the pre-existing weak layers. The warming temperatures today can also add stress to these buried weaknesses, exacerbating the problem.

A fire hose of moist Southerly flow from the subtropics continues to send warm, wet and windy conditions our way. The rain/snow line was ~500-700′ yesterday. At 1,800′ on the Pass, we have seen a storm total (beginning Sunday night) of 8″ of snow (0.9″ water). Winds have been off the hook averaging ~40+mph with gusts close to 90mph from the East. Temperatures at 1,000′ have been 32F and on the ridgetops in the mid 20’sF

This morning, we have a seasonal all time high in snow depth for  Center Ridge at 36″!! This is roughly 60% of average, but more snow than we had at this time last year. There is another 5″ of dense snow (.5″ water) on tap today with very strong Easterly ridgetop winds averaging in the 35-40’s mph. The rain/snow line should rise to ~1,500′ while ridgetop temperatures rise to the upper 20’sF and 30F.

Tomorrow, cooler temperatures slide in lowering the rain/snow line to 500′ and possibly sea level. Winds should be on the decline tomorrow as well as and shift to a more Westerly direction. The storm looks to move out Wednesday with continued cooler temperatures and light snow showers.