There continues to be a  LOW avalanche danger at all elevations and on all aspects in the Eastern Turnagain Arm and Northern Kenai Mountains. Watch for cornice falls, especially during the heat of the day, and human triggered low volume loose snow avalanches on very steep slopes.

As always, it is important to practice good travel habits; expose only one person at a time, use islands of safety when stopping in steep terrain, and communicate plans within your group effectively.

CNFAIC is supported in large part by generous contributions from the community.   Donations of any amount are always welcomed and appreciated.   Click on  F-CNFAIC  or  Pick.Click.Give.  to find out more.   Thank you!

Avalanche Problem 1
Cornice
Cornice Fall is the release of an overhanging mass of snow that forms as the wind moves snow over a sharp terrain feature, such as a ridge, and deposits snow on the downwind (leeward) side. Cornices range in size from small wind drifts of soft snow to large overhangs of hard snow that are 30 feet (10 meters) or taller. They can break off the terrain suddenly and pull back onto the ridge top and catch people by surprise even on the flat ground above the slope. Even small cornices can have enough mass to be destructive and deadly. Cornice Fall can entrain loose surface snow or trigger slab avalanches.
More info at Avalanche.org

With very stable and tranquil weather there has been little change in the avalanche conditions for the past couple weeks and we continue to be in a “copy and paste” regime. Weak layers that were buried with up to 5 feet of snow just over two weeks ago have since adjusted to the load. Currently, we are dealing with a few springtime concerns as can be seen in the video below.

Cornices:
Despite the low avalanche danger, there are good sized cornices that continue to “creep” (slow and continuous downhill movement/deformation of the snowcover) causing them to curl over a little more each day. This is also causing them to separate from the ground/ridge underneath creating “cornice crevasses” (which can be a hazard in itself). A cornice failure is – by far – the most dangerous avalanche problem in the backcountry currently. Cornice falls are very hard to predict but we do know they are more likely to calve or fall during the warm part of the day. With that said, always minimize your time under or near cornices by giving them a wide berth.

Photo is from the Magnum SW ridgeline with sections of the cornice falling off – full write up HERE. 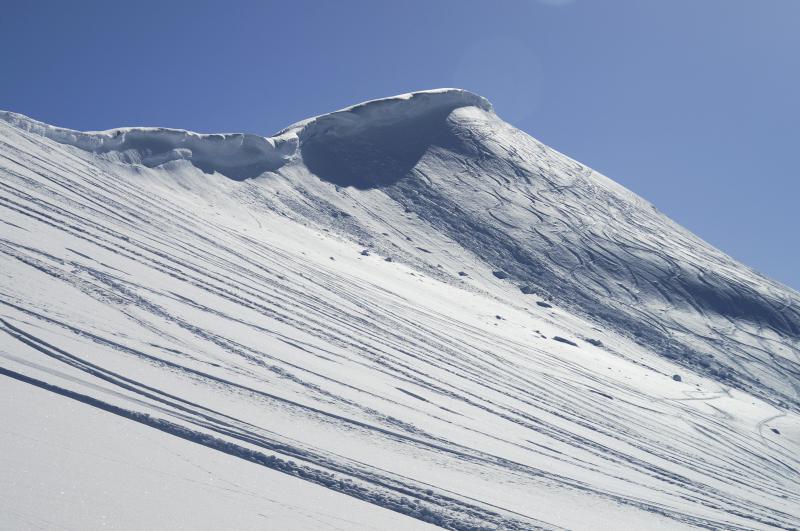 Loose snow avalanches:
Be on the lookout for unconsolidated surface snow to move when provoked by a snowmachine, skis or snowboard.  These can be dry snow sluffs on Northerly facing slopes or moist/wet snow sluffs on steep south slopes. Though these are likely to be low in volume, this issue does become more pronounced in high consequence terrain.

Snow surface conditions:
Despite the sunny weather, the temperatures have been cold enough that significant warming has yet to impact our area. This has resulted in aspects with a northerly tilt to have several inches of soft re-crystalized powder on the surface – this includes many West and East aspects. Additionally, much of the old hard wind affected snow is being ‘eaten’ away by the faceting process as well. Southerly aspects however are in a melt-freeze regime, with variable sun crusts that soften for a few hours during daytime heating and sunshine.

“Heads Up” conditions in steep terrain:
There are plenty of steep slopes with firm surfaces that require a healthy amount of careful and focused travel.  A fall in steep terrain could result in loss of control of a snowmachine or be difficult for skiers or snowboarders to arrest.  Pay attention to the snow surface and learn how to anticipate surface conditions by the look and texture of the snow before you are on it.

Are we really going to finish up March with only one storm cycle? Check out the monthly graph HERE  (if it doesn’t load the first time just re-fresh the page). More monthly numbers coming up on Tuesday’s advisory, but it does look like the snowpack at Turnagain Pass is sitting just above 50% of normal.

Another brilliant day was had in the mountains yesterday. Sunny skies, a light Northwesterly breeze and temperatures reaching the upper 20’sF on the ridge tops. Overnight temperatures have dropped to the low teens in valley bottoms and near 20F at the upper elevations. The Northwest winds have averaged around 5mph and are rising slightly this morning.

Today – another brilliant day is on tap with sunny skies. The Northwesterly breeze will continue to be mostly light with some ridge tops seeing possilby 10-15mph averages. Temperatures look to reach the upper 20’sF on the ridge tops once again.

For the beginning of the week, we are looking at: yep – sunny skies, a light  Northwesterly breeze and temperatures reaching the upper 20’sF on the ridge tops. However…..we should see warmer air move in later/mid week along with a wind shift to the South and East as a low pressure currently in the Bering slowly moves East. As far as a much needed re-fresher of snow, that is still too far out to hazard a guess.