A CONSIDERABLE avalanche danger exists on all aspects and elevations 2,000′ and above. Slab avalanches 3-5′ deep remain possible for a person, group of people or snowmachine to trigger on slopes 35 degrees and steeper. These have the potential to be triggered remotely from ridgelines or the bottom of slopes. Additionally, watch for fresh wind slabs up to a foot deep on West, South and Northerly aspects as the Easterly winds pick up through the course of the day.

At elevations below 2,000′ there is a  MODERATE  danger where 2-5″ of loose snow sits on a snowpack composed of moist snow and crusts.

**These are dangerous avalanche conditions and sticking with conservative travel in avalanche terrain is recommended.

Safer areas to recreate are in the flats and on slopes less than 35 degrees in steepness – or below 2,000′ and away from runout zones.

Placer river and Skookum are  CLOSED  to motorized use from the rain last week.  Seward district riding areas are  OPEN.    Check the bottom of this page for the latest information on riding areas.

Yesterday was a classic sunny Saturday after a storm cycle and many folks were out enjoying Winter Part III. Along with this were reports of a handful of large human triggered avalanches. Luckily, no one was reported caught as they were 3-5’+ deep, large and dangerous. Details are limited, but here is what we know:

–  Four deep pockets in Tincan’s Hippy Bowl (Southwest facing, 3,500/3,000). These slides are suspected to have been remotely triggered from an adjacent sub-ridge. More details HERE.

–  Palmer Creek (South of Hope). At least one large snowmachine triggered avalanche was reported in this drainage – very little information at this time.

Photo below: Widow Maker avalanche – photo was taken by a person looking North on Seattle Ridge. 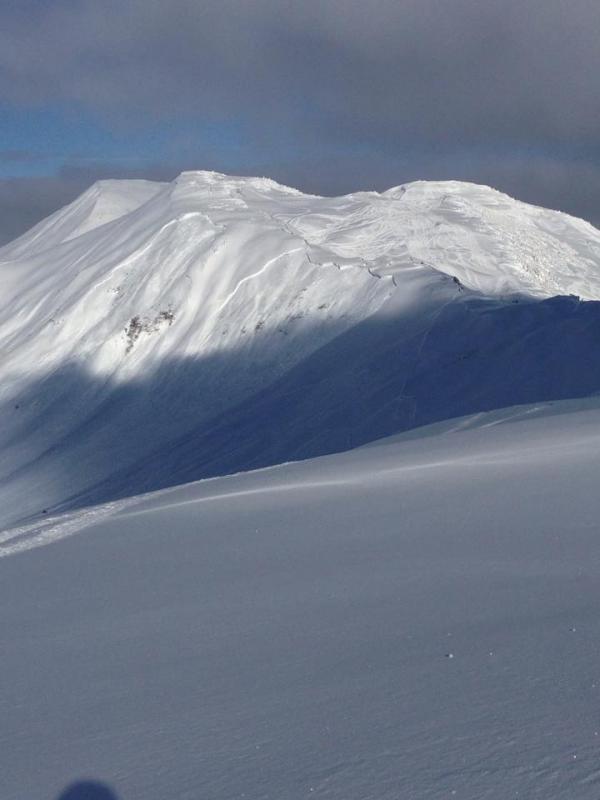 The avalanche activity noted above is suspected to be failing at the old snow/new snow interface. The new snow consists of the combined 3/10-3/14 storm snow that has settled into a very strong slab around 30″ to 4′ thick (thicker in wind loaded areas). The weak layer is suspected to be a thin 1-2cm layer of old weak snow and buried surface hoar sitting above the late February crust.

Lowering likelihood – high consequences:
The slab is thick enough that triggering the weak layer is difficult and the weak layer is showing signs of adjusting to the new load. However, this set up deserves our respect regardless. The sole reason is the sheer size and destructive power of a potential slide.
If you haven’t noticed from the reports of yesterday’s activity, these are deep and dangerous avalanches – the kind that if you are caught up in, are likely not getting out of. Conservative terrain management is key once again for a safe day in the backcountry.

Ridgetop winds are forecast to pick up to ~20mph from the East by noon today and continue to increase into the 40-50mph range by tonight. Although only around an inch of new snow is expected this afternoon, there is upwards of 4-10″ of loose snow already on the surface available for the wind to transport. With these factors in mind, watch for winds to form slabs near ridgelines, on rollovers or by cross-loading in gullies. These slabs will likely be in the foot deep category and sensitive to human triggers.

Additionally, any wind loading and/or wind slabs triggered could stress buried weak layers and aid in triggering a deep slab.

Yesterday was our first clear sky day since last Sunday; between Monday and Friday two storms rolled through bringing 4-5′ of dense snow to the Eastern Turnagain Arm mountains. During the past 24-hours temperatures have averaged in the teens from 1,000′ to 4,000′ and ridgetop winds have been light, 5-10mph, out of the East. Overnight, temperatures have dropped to the single digits above 1,000′ and clouds have begun to stream in.

Today, cloud cover and light snow showers will increase through the day due to a front sliding through from the West. Around an inch of snow is expected by this afternoon with another 3-5″ of low density snow possible overnight. Temperatures will remain plenty cold for snow to sea level – teens at 1,000′.  Winds from the East are slated to pick up this afternoon and by midnight blow in the 50mph range.

Tuesday, light snowfall is expected to continue with up to another 2-4″ accumulating. Winds look to remain strong from the East and temperatures cold enough for snow to sea level.