There is a MODERATE avalanche danger for triggering a slab avalanche between 1 and 3′ deep. Persistent slab avalanches up to 3′ in depth remain possible for a person or snowmachine to trigger on steep, 40deg+ slopes, with prior wind loading. Also, watch for lingering hard wind slabs in steep rocky terrain around a foot deep that formed during Sunday’s wind event. And last, with warming temperatures at the upper elevations today, watch for cornices to become more sensitive and potentially break.

It was a fairly quiet day in the backcountry yesterday. Not many folks were out (possibly due to the challenging surface conditions) and no avalanche activity was observed/reported.

For today, triggering a persistent slab avalanche is the primary concern. Sitting around 1-3′ deep in the pack is a thin layer of weak faceted snow on top of a thick crust that has plagued our mountains for over 2 weeks. Though the likelihood of triggering one of these has decreased, the consequences have increased. The slab is now hard (due to Sunday’s wind) and will likely allow a person and/or sled onto it before potentially releasing – making escape more difficult. The most likely areas to trigger a persistent slab are steep wind loaded slopes (>40deg) that are unsupported from below. Additionally, keep in mind those likely trigger points. These are where the slab is thin: near rocks, on the tops of rollovers and the edges of Sunday’s wind slabs/drifts.

It seems there was very little snow that the strong winds on Sunday did not move around to some degree. Current surface conditions are everything from scoured ground, sastrugi, hard wind slabs/drifts and even some soft settled snow in between and in the trees. Wind slabs yesterday were very hard, variable in distribution and stubborn. They seem to be fairly well welded into place – generally speaking. However, in steeper rocky areas where the slabs are unsupported from below or they are resting on weak faceted snow I’d be suspect one could be triggered.

As temperatures begin to climb today with the approach of warm air at the upper elevations, watch for cornices to become more sensitive.  They are composed of very hard snow right now and could break farther back than expected.

During the past 24-hours we have seen clear skies and breezy winds. Temperatures rose to the mid 30’s F at treeline yesterday and the low 20’s F on the peaks. Valley bottoms have cooled off overnight and are sitting in the teens this morning as ridgetops remain around 20F. The South and Easterly winds continue to average between 10-20mph with gusts up to 53 overnight.

Today we have one more sunny and breezy day on tap. We should see daytime highs in the mid 20’s on the peaks and around 30F at treeline. Southeast winds remain around 10-20mph with higher gusts but should increase tonight. Cloud cover will also increase late in the day as a warm and wet storm approaches.

Yes, a warm storm system is on our doorstep. Beginning tonight and through Thursday we can expect temperatures to rise significantly with a chance for decent precipitation. Models now are showing around 1″ of water equivalent from tonight through Thursday with a rain/snow line ~1-1,500′ (but may be higher..). Stay tuned – this could go one way or the other as is common for AK!

An inch of water – equating to a foot or so of snow – would help mend the ski and riding conditions which now look a bit like this: 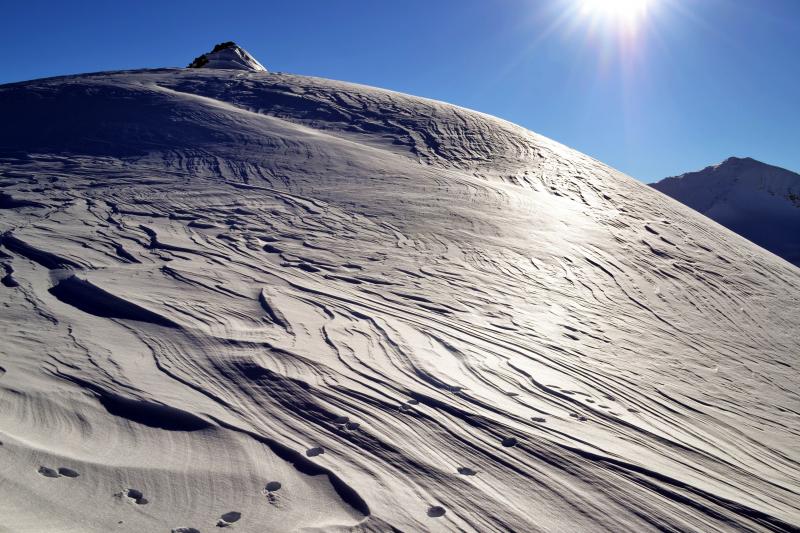