The avalanche danger will remain at MODERATE above treeline today.   Human triggered soft slab avalanches will be possible to trigger where a slab has formed on top of a thin layer of faceted snow.   Likely areas to find a slab will be in wind-loaded terrain at and above treeline.   Much of the snow that fell on Friday is still quite loose and unconsolidated.   In these areas where the snow is less cohesive and a slab does not exist, triggering an avalanche is less likely.

Below 2,000 feet the avalanche danger is LOW and triggering an avalanche will be unlikely today where 3-15 inches of loose snow is resting on either a frozen ground or a stout crust.

Thanks to all who have taken the time to submit snowpack and avalanche observations over the season and particularly over the last few days!   Your information proves extremely valuable to the Avalanche Center and the greater recreating public!

Areas such as Tin Can continue to harbor a weak layer of facets just below the storm snow that was deposited during our very localized storm on Friday February 7th.  The common weak layer in several human triggered avalanches over the weekend has been a thin layer of buried facets resting on the stout rain crust that continues to prove reactive to human triggers.  Though not widespread, this buried layer of facets has been popping up across the forecast area with reports of remote triggered avalanches as recent as yesterday.  Additional activity includes this snowboarder triggered soft slab in Warm up bowl yesterday (see photo below). 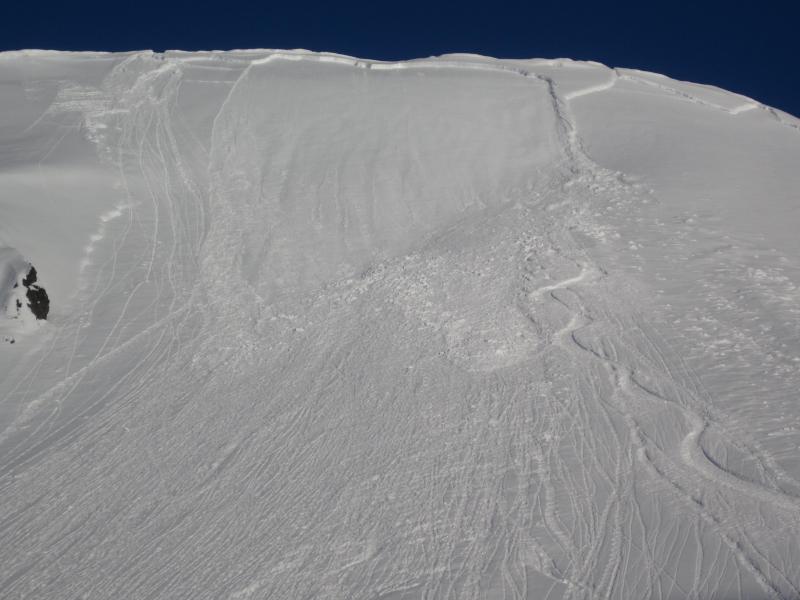 In terrain above 35 degrees where the snow is cohesive enough to form a slab it will be possible to trigger a soft slab avalanche 12-24” deep.  With a known persistent weak layer and slick bed surface, sussing out if a slab exists on the slope where you want to travel will be the key to fun and predictable skiing today.  It’s worth noting that the slab does not exist uniformly throughout the mountains and much of the snow from Friday’s storm is still quite loose and does not exhibit slab characteristics.  Wind loaded slopes however, (generally with a westerly tilt) will be the more likely areas to find a slab and subsequent avalanche.

Numerous hand pits throughout your travels may be the best test to identify where a cohesive slab exists today.

Sun effect?
Believe it or not the sun has been able to create a crust on southerly slopes. This was seen mainly in the mid and lower elevations again yesterday (2,500′ ish).

The deep slab issue is still of concern in the upper most elevations of our forecasting zone. The likelihood of triggering a full depth avalanche is low but the consequences remain high.

This problem is not a concern below 3000ft where the previously water saturated layers have now frozen into a very strong and stable crust layer.

We have received some great observations over the past several days in the Turnagain pass area and the variability of this most recent storm (Friday Feb. 7th) has been quite impressive in terms of snowfall amounts and bonding to the melt-freeze crust from ridge to ridge and valley to valley.  With a dozen or more avalanches on Tin Can Saturday and a generally quiet weekend across the valley on Seattle Ridge (and even Sunburst), this is a good reminder that spatial variability exists within the mountains.  The information gleaned from this website is only one piece of the puzzle and its imperative that decisions in the backcountry are made based on a litany of information gathered throughout the day in your particular location.

Clouds broke up around noon yesterday revealing mostly sunny skies after depositing up to 2 € of low-density snow in the Turnagain Pass region.   Winds at the mid and upper elevations also dropped off to the low teens around this time though winds in the lower elevations along Turnagain arm did see an up-tick in the afternoon, predominantly from the west.   Temperatures reached as high as 20 degrees during the heat of the day on Seattle ridge, yet it felt much warmer in the direct sun.

Today we can expect a generally mild day in terms of weather.  Sunny skies and light variable winds will be in store with temperatures reaching about 20 degrees at 1,000 feet.   There will be a possibility for valley fog to roll in come afternoon, as this has been the trend over the last several days in Turnagain pass.

Looking out a few days the National Weather Service seems to have high confidence in a portion of the polar vortex (that has been so burdensome in the lower 48) dipping south across the state and ushering in much colder temperatures.   There looks to be at least a chance of snow everyday Wednesday through Saturday, and given the forecasted cold temps any snow will fall as low-density powder, also known as the super-fluff!