The  MODERATE  danger rating above treeline is going to stay with us due to the persistent nature of our problem.  Natural avalanche activity is unlikely, but skier triggered avalanches are possible on steeper slopes in the higher elevations.  Due to thin snow cover, avalanches have been relatively low volume despite reasonably large propagation width in the last few days.  Slab depth is ranging from  6″-20″.

Below treeline is  LOW danger with very thin snow coverage and crust.

The next advisory will be on Thursday, Thanksgiving day.  We do not expect major changes in the forecast for Wednesday.

The old surface that we were skiing a week ago is the current weak layer, with the November 21st storm snow failing on those loose faceted grains.  See this observation for a detailed look at the snowpack structure.  Since the storm on Friday we have had 3 decent avalanches reported to us, and keep in mind that few people are skiing south of Anchorage right now.  All of these avalanche events are behaving in a similar nature, breaking on the storm interface from November 21st.  The storm snow is heavier and denser than the underlying layer of weak faceted snow, making this failure easy to identify in snowpit tests.  Reports from a couple days ago were identifying failure on isolation or with very light force.

The picture below is actually from the Summit Lake area, but shows a similar problem farther south on the Kenai.  See this observation for another picture from that reported avalanche. 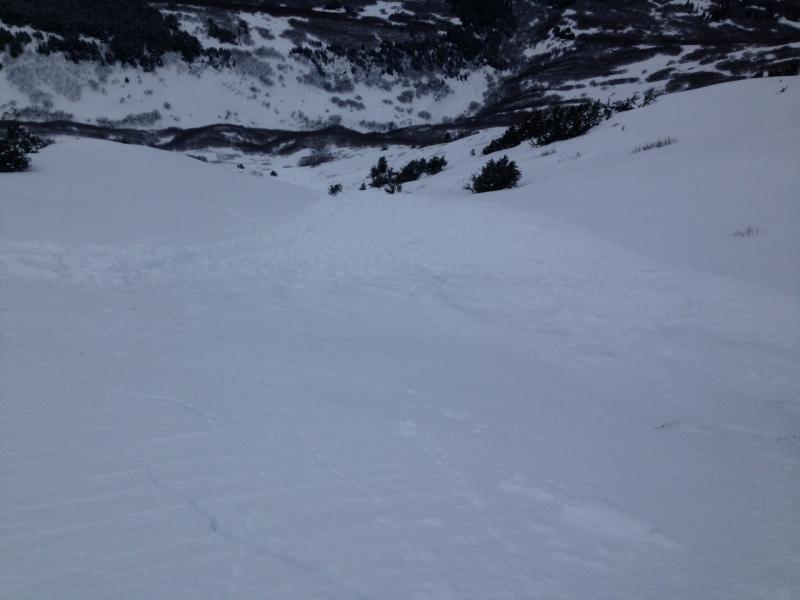 We expect this kind of avalanche potential to stay for a little while longer.  Time, warm temperatures, and continued storm cycles will eventually fix the problem.  Until then, caution is warranted when deciding where to go right now.  Also keep in mind that the snowpack is shallow.  Rocks and trees are barely covered, if at all.

There is no new snow in the last 24 hours.  Temperatures are in the high 20s.  Wind is light.

The National Weather Service continues to have light snowfall in the forecast.  1-3 inches of snow is possible today as a weak surface low enters Prince William Sound this morning.

Temperatures will stay near freezing in the mountains and perhaps rising above freezing near sea level.  Wind will stay light and variable, 10-20 mph.