A skier triggered avalanche on Tincan yesterday confirms that the storm snow overloaded the weak layer underneath.  Today we can expect more of the same, but calmer weather and more than 24 hours since the peak of the storm will drop the danger rating to MODERATE.  Human triggered avalanches are possible today, and steeper windloaded features above treeline should be approached cautiously.

The nature of yesterday’s reported avalanche is driving a lot of this advisory today.  We still have a shallow snowpack, so we can’t expect truly large avalanches to happen.  Nonetheless, the new snow from Thursday and Friday (6 inches to 2 feet) is lying on a tenuous layer of weak faceted snow.  The avalanche reportedly triggered sympathetic avalanches nearby.  This is a big red flag for poor bonding and unstable snow.  The report also goes on to say that testing showed “failure on isolation”, another big red flag.

We can expect the backcountry to be more stable than yesterday, but I have no doubt that trouble can be found if you go jump on a bunch of steep slopes.  Terrain choices will drive safe decisions this weekend – bigger and steeper slopes should be avoided.

Other places, such as Max’s mountain in Girdwood were showing evidence of natural loose snow avalanches yesterday that stripped the snow to the ground.  See picture below. 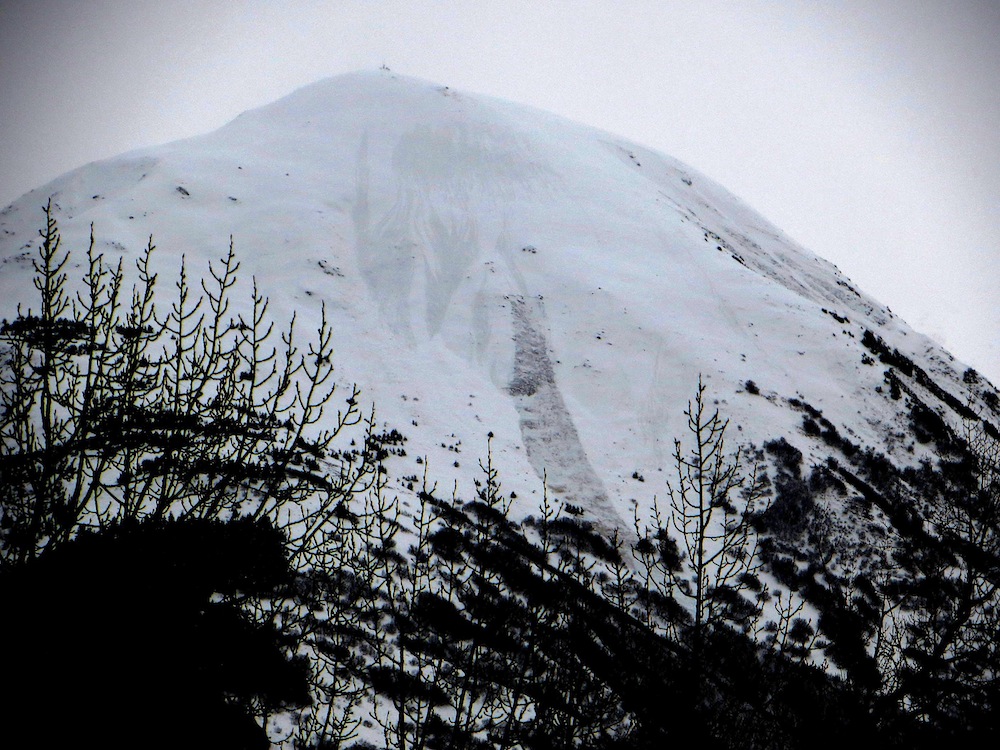 The bulk of the snowfall on Thursday and Friday came with strong Easterly wind.  Deeper wind deposited snow will be found on West aspects and cross loaded North and South features.

Another few inches of snow fell yesterday morning, with the freezing rain down at sea level.  Wind has dropped back to more reasonable levels.  The temperature has cooled off from the mid 30s yesterday to the teens and 20s this morning.

Snow showers are still in the forecast today, but only a few inches at most.  The weather does not appear to be contributing to any increase in the avalanche potential today.