Pockets of  MODERATE concern can be found in a couple specific areas today.  The snowpack is generally stable, and most areas are showing a  LOW avalanche danger.

Recently formed wind slab has been reported to be whoomphing in some places.  That collapse is a serious red flag, meaning that a weak layer exists underneath the stiffer slab.

Wet avalanches may be a concern if temperatures get high enough this afternoon.  Watch your south exposures as the sun bakes those slopes late in the day.

This is the final weekend of advisories for the season. The last advisory will be Sunday, April 28th.

20 mile river is now closed for the season to motorized use due to insufficient snow cover.

Pockets of collapseable and reactive windslab have been reported to us in Turnagain Pass and the Summit areas.  We got two reports that areas were whoomphing large sections, to “200 feet away”.  The observers reported that the weak faceted layer responsible for the collapse was only about 6 inches deep, but it is still cause for concern.  Check the observations page to read the full details.

The last couple days had strong wind at the ridge tops with visible plumes between Anchorage and Seward.  The snow storm earlier in the week stayed relatively cold and dry at higher elevations, then that snow was transported by the wind.  We may still find some of that wind slab this weekend, and it’s worth some careful thought if traveling in steep terrain.

The character of this type of avalanche will be relatively small and shallow, more likely at higher elevation, and consist of fairly stiff snow that may support a skier before it fails.  The plumes that I saw were oriented north to south, meaning that south facing slopes are more likely to be loaded.

When I was out yesterday it just seemed too cold for wet avalanches to be a concern.  That trend may continue this weekend.  The wet avalanche concern is still relegated to lower elevation, direct south facing slopes, and late in the day.  We got a hard freeze last night, meaning crusts will be thick this morning.  It will take a lot of solar energy to break down that crust and penetrate deeper into the snowpack before any real loss of snowpack strength is realized today.

Most of the wet debris piles that you might see today happened just after the last storm from early in the week.  This is when we had the most significant warming and soft surface snow was available before it went through multiple melt/freeze cycles. 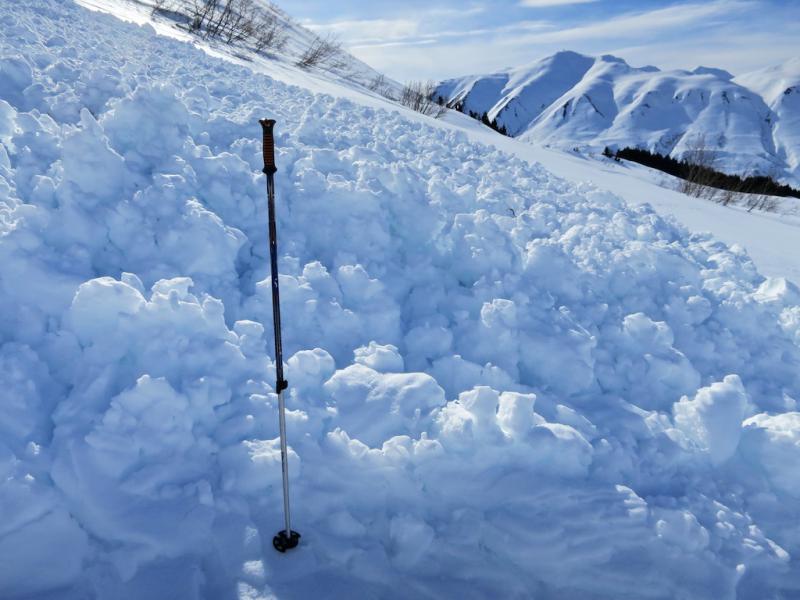 Cornices are still big!  At elevations where cornices form, generally well above 2000 feet, we haven’t lost much of our snowpack to melting.  Remember, cornices lose strength when it gets warm and the snow begins to melt.  If the structures are already hanging in an unstable balance, that loss of strength can be the trigger to send them on their way.  Or they could be close to falling, just needing another 100+ pounds of stress to tip the balance.

Avoid cornice exposure, especially late in the day when they will be more likely to collapse. 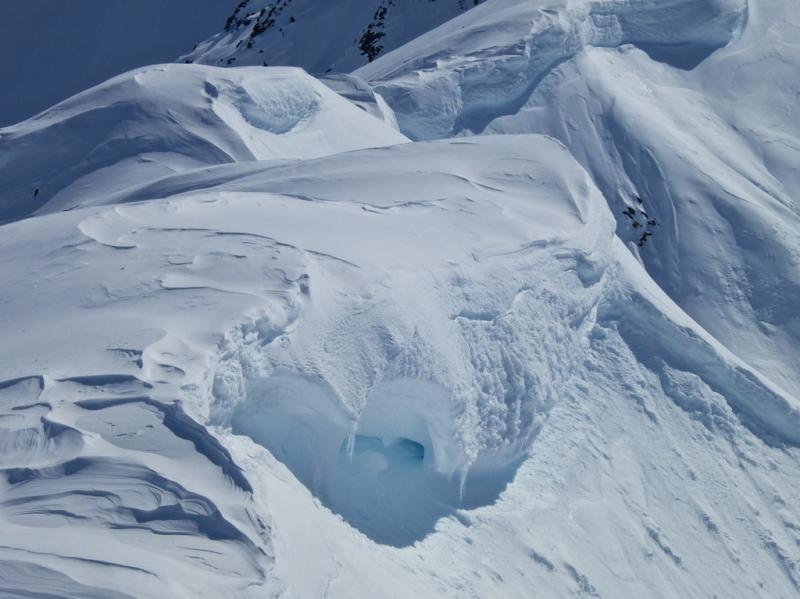 We have had no precipitation in over 48 hours.  Wind was mostly calm yesterday, with a northwest wind into the mid teens on Sunburst.  Temperatures got to above freezing at sea level, but the freezing line did not extend all the way to the top of the ridges.  Above 3000 feet stayed fairly cold.

Last night, temperatures dropped to about 26 degrees at sea level and to the mid teens at 4000 feet.  Highs today will hit the low 40s.  Wind should be light from the northwest.  Mostly cloudy to partly cloudy skies are expected with no precipitation.

Wendy will issue the next advisory tomorrow, April 28th.