The avalanche danger is CONSIDERABLE today on all slopes above and below treeline. New snow and strong wind continues to impact the mountains in the Eastern Turnagain Arm region. Natural avalanches are possible while human triggered avalanches are likely. During the past 48 hours we have seen between 1-2′ of snow with more expected today. Wind slab avalanches 1-3′ deep will most likely affect the near and above treeline elevations. Below treeline, the potential exists for avalanches to fail in mid-pack weak layers creating larger slides.

Placer/Skookum and 20 mile are now OPEN to snowmachines, with adequate snow cover in those areas.   Watch for areas of thin snow cover, open water, and other hazards that you won’t find at higher elevations.   The avalanche center staff have not been to this zone yet, so we can only speculate on the snowpack at this time.

AK DOT avalanche hazard reduction work:   There will be intermittent road closures at the Sterling Wye on the Seward highway.   Motorists should expect delays of up to 45 minutes between 11:00 AM and 2:00 PM. See 511.alaska.gov for updates.

Today’s main concern will be wind and storm slab avalanches formed by the new snow. These are expected to be 1-3′ deep, possibly releasing naturally, and not something to mess with. For the past two days the new snow has been deposited in rapid loading events. One occurred Monday night, another last night and a third is on the way today. The strong east winds have been sustained through these loading events and blowing to lower elevations. Avalanche activity is expected to be a bit more active than yesterday (see below). Once the wind and snowfall lessen, the mild temperatures will act to stabilize the new snow – but we should be in the thick of it today.

Yesterday’s avalanche activity:
We saw a handful of natural avalanches yesterday including this one from southwest facing Sunburst pictured below. There were also several artillery triggered avalanches by the AK DOT. These were all confined to the 10-12” of new snow from Monday night. More details HERE. 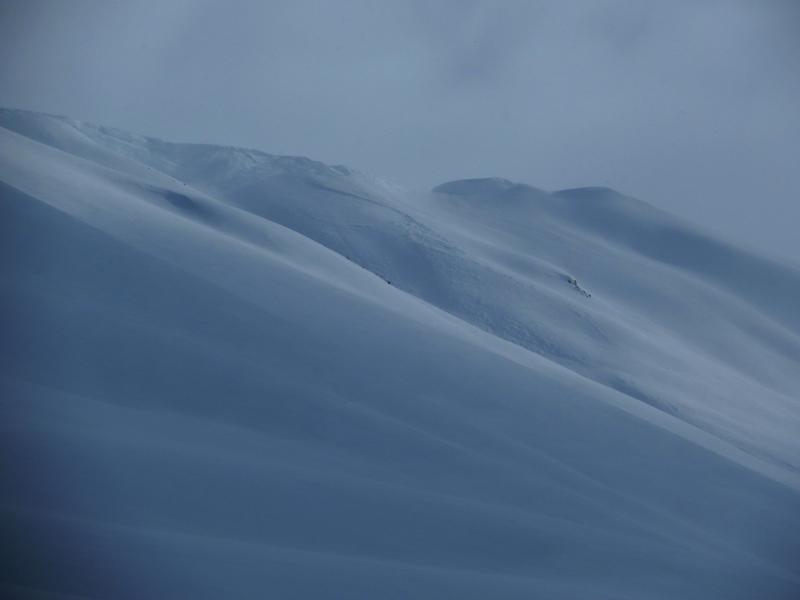 Cornices deserve a wide berth as they have been building steadily recently and breaking fairly far back.

Loose snow avalanches are expected in the dryer snow above treeline as well as damp point release avalanches below treeline.

The additional load of new snow (1 to 2” of water weight) onto the pack has the potential to reawaken buried weak layers. The mid and lower elevations harbor various facet/crust combos (weak snow on top of a crust) that so far seem to be pretty stubborn to trigger. The most concerning combo is at the lower elevations, below 1,500’ where it only sits about 2’ deep. Another one is the late January combo which is 3-6’ deep and reaches up to 3,000’.

With regard to our old friend the deep slab, we received a report of collapsing in the weak early season snow yesterday in the Summit Lake region. The interior Kenai has a shallower snowpack and triggering a slide breaking at the ground in this area is not out of the question. This weak layer may be 2 months old but a snowmachiner did trigger it 9 days ago.

Snow totals from Monday night’s storm turned out to be a bit more than forecast in the Turnagain area. We saw 10-12 € above treeline at Turnagain Pass and 8 € in the parking lots yesterday (Tuesday) morning. Snowfall gave way to clearing skies for an hour or two before firing back up in the evening. Winds on the other hand didn’t take a break. These have been relentless from the east for two days now averaging 20-35mph with gusts in the 50’s. Temperatures have been holding steady with ridgetops near 20F while sea levels are hovering in the mid 30’s. We have been at a rain/snow mix at sea level with moist snow at 1,000′.

Today, another round of snow and wind is moving through. As of 6am this morning Center Ridge SNOTEL  at 1,900′ is reporting 7 € of medium density snow overnight with another 4-8 € expected today. Wind will remain from an easterly direction with averages near 20-30mph and gusts to 50. Temperatures look to stay near 20F on the ridgelines and the mid 30’s at sea level. A rain/snow mix should continue at sea level.

Thursday intermittent snow showers and partly clearing skies should be over us as this system heads out.

Graham will issue the next advisory tomorrow morning, February 28th.