A MODERATE avalanche hazard remains above treeline today where a skier or rider can still find reactive pockets of denser wind slab.   These slabs may be covered by 4-6 € of new, light density snow that is easy to sluff in steeper terrain.   Below treeline the hazard is generally LOW where wind affected snow is more difficult to find.   Today’s weather is unlikely to be a big contributor to our avalanche concerns, keeping the trend steady.

It will be unlikely that we’ll see any natural avalanches today though it will be possible for a skier or snowmachiner to trigger a wind slab formed during our last storm day (Saturday).  Pay attention to any red flags (recent avalanches, shooting cracks or collapsing in the snowpack) and continue to avoid cross-loaded gullies or steep wind-loaded terrain below ridges, as these are likely areas to trigger a wind slab. Stability tests from yesterday gave us some confidence in the Turnagain pass area that the new storm snow from over the weekend is bonding well to the older snow surface.

However, in areas such as the Girdwood Valley that received significantly more snow than Turnagain this past weekend, wind slabs will be deeper and easier to trigger.  A report of a class 3 avalanche yesterday in the Girdwood valley showed significant propagation, likely on facets forming near a crust around 2700’.

One can sluice out several of these different crusts (rain, rime and melt-freeze) in our mid to upper pack with a hasty snow pit or probe poke.  These distinct layers can act as a good bed surface or interface that a relatively shallow avalanche may step down to.  Crusts are widespread throughout the forecast area, proving reactive in the mid elevation band at and just above treeline. 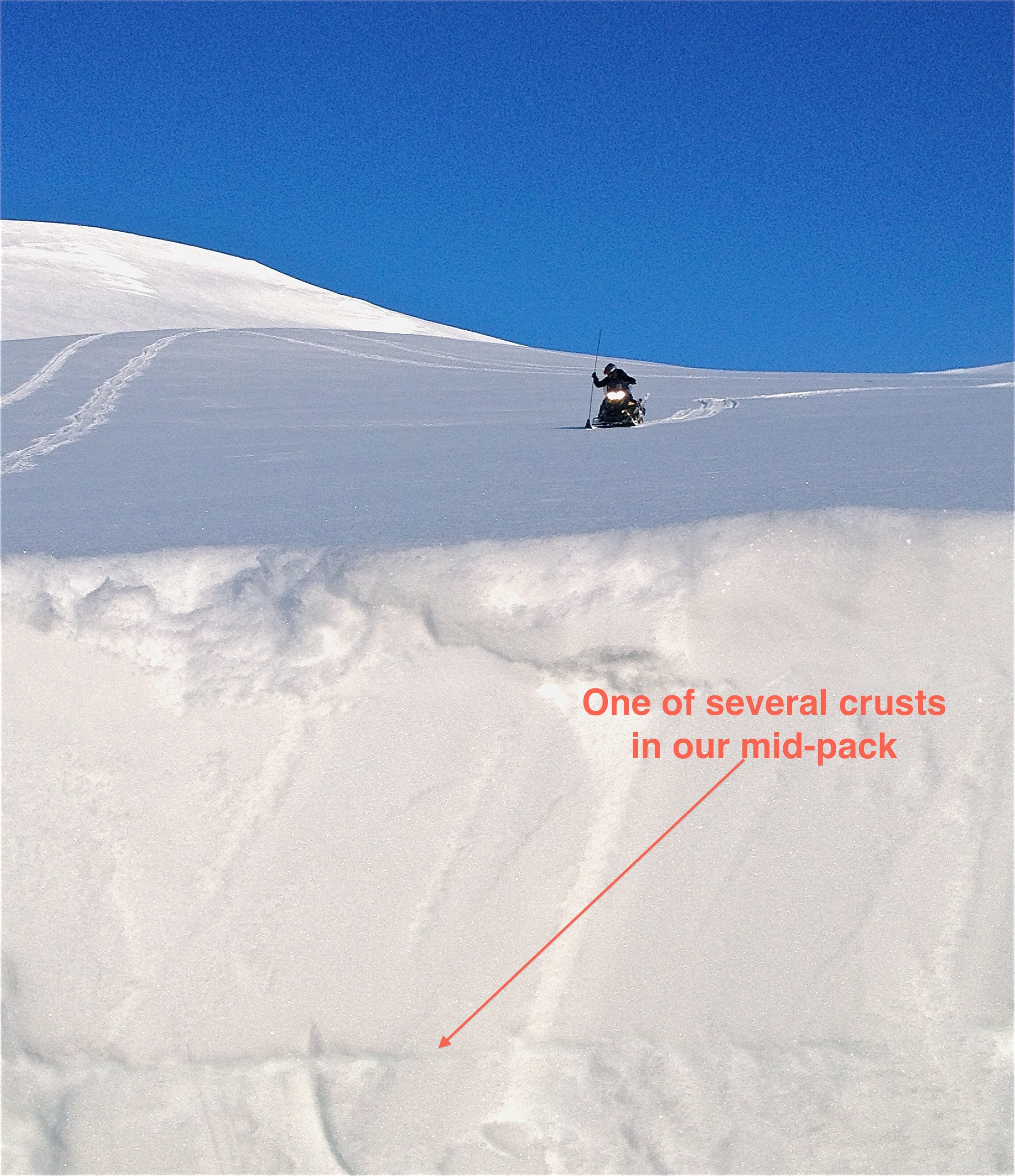 CNFAIC forecaster John Fitzgerald “feeling out the crusts” (~2600’) in addition to measuring spatial variability (depth) across a slope.

Loose, low-density surface snow will not be gaining any strength today as temps stay cool.  Sluffs initiated in steep terrain greater than 35 degrees will have the tendency to run fast and far.  Expect it, manage your terrain accordingly (avoiding terrain traps) and this should not prove a significant issue.

Cornice fall also warrants a brief discussion as we did find evidence of cornice failure on Seattle ridge yesterday.  Cornices have a very nasty habit of breaking farther back than you expect so it’s a good idea to travel well away from the face of a cornice as these monsters continue to ripen into mid-February.

2-5 € of snow and southeast winds in the 10-20 mph range are expected today under cloudy skies.   Temperatures have rebounded somewhat this morning from a low of 16 degrees at 1800′ yesterday and look to land in the comfortable range of the high 20’s at 1000′ today.   Snowfall is expected to become heavier this evening and overnight as a series of weak surface lows are lining up this week, keeping the weather active in south central Alaska for the near-term.

Kevin will issue the next advisory tomorrow morning February 13th.