Recent avalanche activity tells us that the mountains are still reactive in a deep and dangerous way.   Above treeline we can expect CONSIDERABLE avalanche danger.   Natural avalanches are still possible, but human triggered avalanches are the bigger concern.   With the deep slab problem we don’t expect a lot of avalanches to happen, but those that do will be large and destructive.   Below treeline, watch for large runouts hanging above and continue to treat every steep slope with respect.

Chugach Electric is doing a major overhaul of the powerlines from Ingram creek to Silvertip across Turnagain Pass.   The entire powerline easement is a construction zone this winter.   We can expect heavy equipment in the corridor and stashed materials such as culverts and poles which may be partially buried by snow.   Caution is needed while traveling in the powerline easement.

Recent avalanche activity is the most pertinent information we have available, and it’s telling us a compelling story right now.  Yesterday we had a new avalanche on the north end of the motorized side of Turnagain Pass, with wide propagation on an east facing slope.  Around 850 in the morning yesterday the large avalanche path between Portage lake and the Whittier tunnel entrance slid full width and full depth.  On Wednesday a large avalanche was triggered on Tincan by a skier, then we got another foot of snow.  If you haven’t watched the video by Alyeska ski patrol yet, it’s worth taking a few minutes to see their perspective of managing the same deep slab problem at the ski area.

Our weak layer is now buried 3-10 feet deep, depending on wind loading.  It is difficult for a single person to affect something that deep, but if a collapse is initiated from a shallow trigger point the resulting avalanche is likely to be very large.  A skier should be concerned about trigger points in steeper terrain, including near exposed rocks, sparse trees, or on the edge of a wind scoured ridge.  Snowmachines cause a greater force on the snow and will be more likely to be a deep slab trigger.  Slope angles above 35 degrees deserve extra caution and avoidance, and every aspect is affected.

Common tools to identify avalanche hazard with this deep slab problem are not likely to be effective.  Don’t expect to see shooting cracks or hear whoomphing, because that weak layer is buried deeper than your ski pole.  Test slopes will also not show an unstable character unless they break full depth, which is what we’re trying to avoid in the first place.   Compression tests on isolated snow columns may indicate false stable results.  All this information is superseded by evidence of natural avalanche activity and a weak layer which we know is not gaining strength quickly. 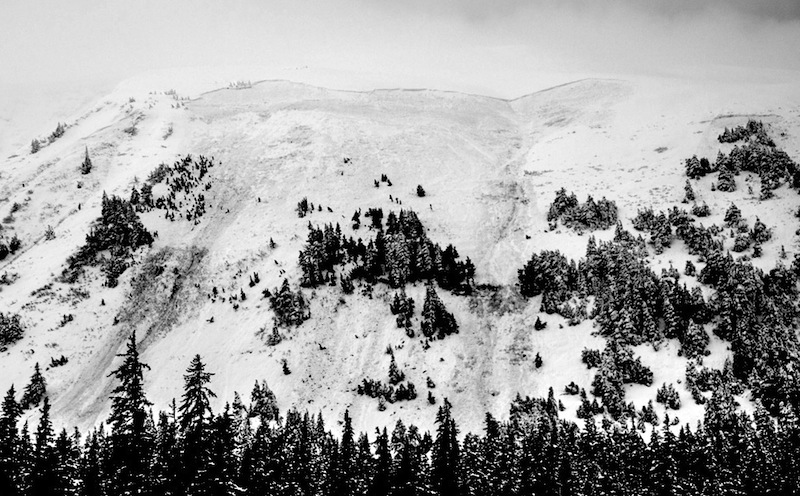 Forecasted wind is enough to create fresh wind slabs.  We have yet to notice a problem within the storm layers of the last 12 days, but that’s mainly because few people have ventured above 2500 feet.  Wind slabs are a concern of their own, but combined with a deep slab step down potential they can be extra dangerous.

Little to no precipitation in the last 24 hours and moderate wind has not added much to the avalanche problem.   Today 2-6 inches of snow is expected with strong southeast wind at the ridges.   Slightly colder temperatures are expected to keep the snow line down to sea level.

In the long term, a chance of snow is in the forecast every day for the next 4 days.   We will stay in the active pattern into next week, but not as intense as we’ve seen recently.

Wendy will issue the next advisory on Sunday, January 6th.