Good morning. This is Wendy Wagner with the Chugach National Forest Avalanche Information Center on Saturday, April 21th at 7am. This will serve as a general backcountry avalanche advisory issued for Turnagain Arm with Turnagain Pass as the core advisory area (this advisory does not apply to highways, railroads, or operating ski areas).

The next advisory will be issued Wednesday morning. Keep checking the photos/observations page for up to date information.

Don’t forget to swing by the Turnagain Pass motorized lot tomorrow, April 22nd between 4 and 7pm for FREE FOOD and FUN at the 2012 Corn Harvest!!

We have a MODERATE danger this morning for wet loose and wet slab avalanches. A CONSIDERABLE danger exists on east facing slopes such as Seattle Ridge where avalanches have been seen daily – this is not the place to recreate under or on right now. All aspects and elevations may rise to CONSIDERABLE if the sun pokes through today. Sunday-Tuesday, we look to be in a freeze/thaw cycle with a generally LOW to MODERATE danger in the morning that quickly rises to CONSIDERABLE for wet avalanches later in the day. Steering clear of slopes with saturated snow to your boot tops, rotten snow that does not hold your weight, or areas under glide cracks is advised.

It has been quite an eventful week for avalanche activity as the springtime shedding of the pack took effect after a warm storm was followed by sunny warm days. Wednesday, April 18th, seemed to be the height of activity to date, with several natural class 3 wet slab avalanches from Girdwood Valley through Turnagain Pass to Summit Lake. Alaska DOT crews shot down a very impressive large wet slab at Mile 44 that buried the (closed) road. Yesterday, we know of two naturals that released, the one pictured below on east facing Seattle Ridge and anCNFAIC Staff large slide on the east face of Raggedtop in the Girdwood Valley.

The photo below is of a glide avalanche that released yesterday above the Turnagain Pass motorized lot (East facing around 2800′). 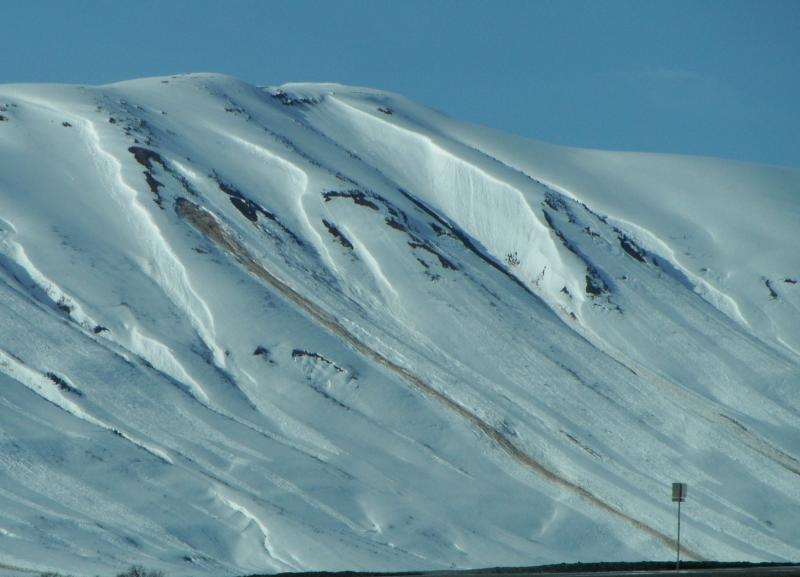 Now that much of the pack has been shocked by warm temperatures and sun, wet activity has become less widespread. Today, east winds and limited sun may reduce the heating of the pack but cloud cover may have limited the amount of refreezing overnight allowing for instability to increase rapidly during the day. We have been in a freeze/thaw cycle for the past few days and after our mixed weather today, we should return to this regime. The snowpack is on its way to developing drainage channels and forming a thick supportable crust, yet there are still areas that are sitting on the brink adjusting. Good pseudo-corn conditions have been found of late and hopefully that will continue into next week. Timing is everything this time of year and it is a good idea to get off of slopes that become soft up to your boot tops or become punchy.

Cornices deserve a wide berth as they continue to be tender with our warm conditions.

An old layer of buried surface hoar sits 12-24″ deep on west through northeast slopes at and above ~2500ft. This layer is suspected to be the weakness in several natural avalanches on 4/16-4/18: north facing Tincan mid-slope ~2500′, west facing slope ~2500′ up Center Creek and CNFAIC Staff slopes in the Kenai mtns.

Brilliant sunny skies, light winds and warm temperatures have made the dark days of winter a distant memory. We have been seeing temperatures in the 40’s below treeline and upper 30’s on the peaks. East winds have been 5-10mph.

Today, a shift is the weather is in store as a weak system in the Gulf will bring clouds and a chance for light rain below 1500′ and a flurry or two above 1500′. No accumulation is expected (possibly a trace to an inch at the upper elevations). Easterly winds have bumped up to 10-20mph on the rigetops, where they should remain through Sunday. Temperatures should be in the 40’s below treeline and 30’s above. Sunday afternoon through Monday skies look to clear up with mild weather returning.

We will issue the next advisory Wednesday morning. If you get out in the backcountry we want to know what you are seeing. Please send us your observations using the button at the top of this page or give us a call at 754-2369. Thanks and have a great day.