The avalanche danger remains CONSIDERABLE above 1000′ today. Lots of soft snow at the surface combined with moderate to strong NW winds are forming wind slabs 1-2′ deep. These will be likely for a person to trigger and possible for natural avalanches today. Wind slabs are most likely to be found at upper elevations, along ridgelines, and wind loaded gullies. Loose snow avalanches are also likely on steep slopes sheltered from the wind. Below 1000′ the avalanche danger is MODERATE where wind slabs are less likely.

Chugach State Park: The front range received up to 2′ of new snow on Tuesday/Wednesday! This is a big load of new snow on top of a thin and weak snowpack. Dangerous avalanche conditions exist, especially in areas being impacted by the moderate to strong NW winds. We received an observation yesterday of a remote triggered avalanche that released the entire snowpack down to the ground!

Motorized Areas: All motorized areas remain closed. The recent storm favored the Anchorage area and we still need a deeper base at the trailhead elevations for the forest to open for motorized travel. Stand by to see how the next storm system on Sunday/Monday plays out!

Forecaster Chat #1: Come join forecaster John Sykes at Alaska Mountaineering and Hiking from 7-8 pm on December 15th to discuss current conditions, how to submit quick and quality observations, and decision-making during complex snowpack conditions. Admission is free and all are welcome!

Turnagain Pass – We were able to find a very small wind slab at the top of treeline (2300′, N aspect) on Tincan yesterday. This failed easily with the weight of a skier but was only ~6″ deep and 15′ wide. In windier locations I imagine these wind slabs were larger, easy to trigger, and probably releasing naturally in some locations. 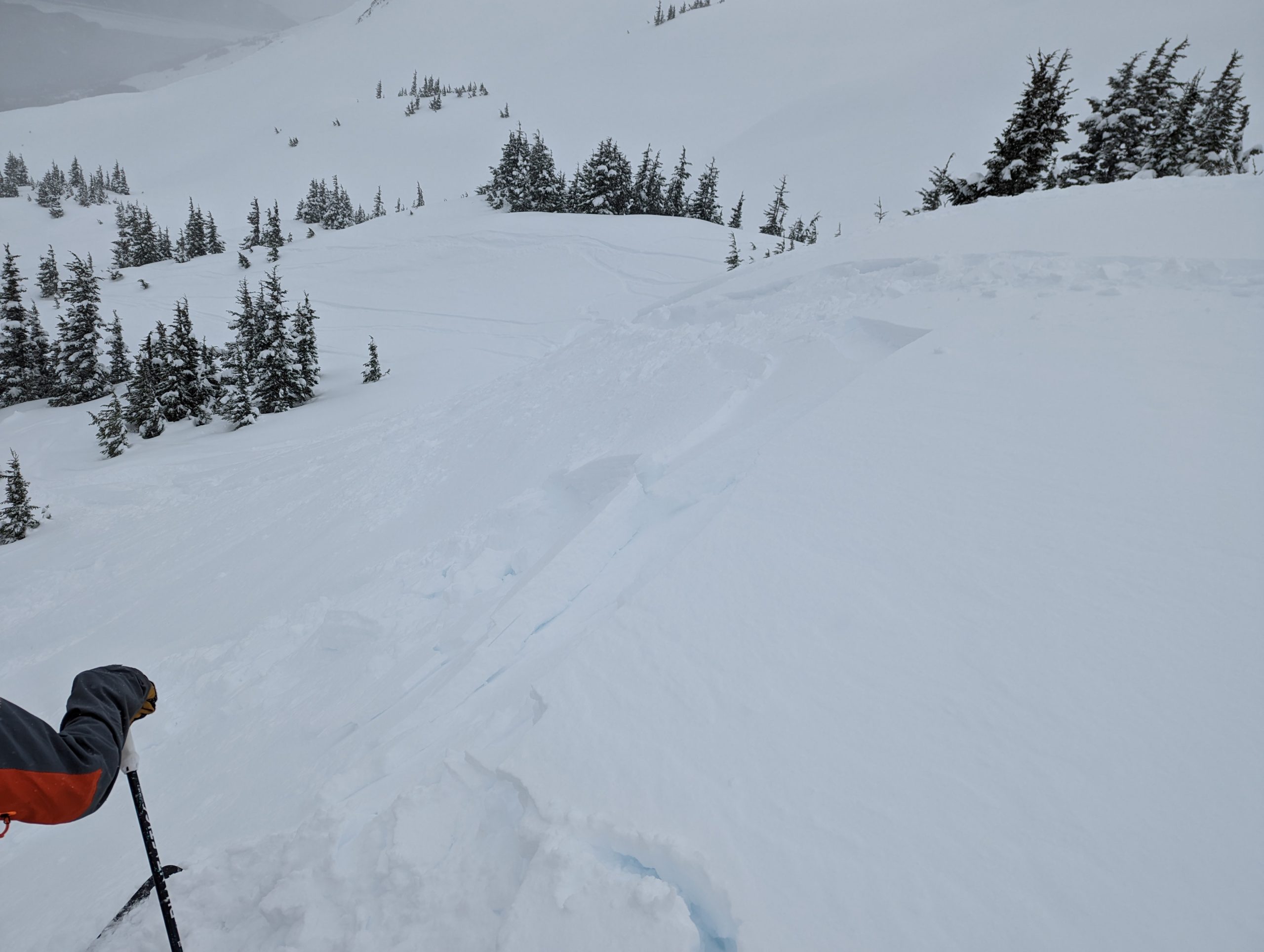 Avalanche Problem 1
Wind Slabs
Wind Slab avalanches are the release of a cohesive layer of snow (a slab) formed by the wind. Wind typically transports snow from the upwind sides of terrain features and deposits snow on the downwind side. Wind slabs are often smooth and rounded and sometimes sound hollow, and can range from soft to hard. Wind slabs that form over a persistent weak layer (surface hoar, depth hoar, or near-surface facets) may be termed Persistent Slabs or may develop into Persistent Slabs.
Aspect/Elevation of the Avalanche Problem
Specialists develop a graphic representation of the potential distribution of a particular avalanche problem across the topography. This aspect/elevation rose is used to indicate where the particular avalanche problem is thought to exist on all elevation aspects. Areas where the avalanche problem is thought to exist are colored grey, and it is less likely to be encountered in areas colored white.
Likelihood of Avalanches
Terms such as "unlikely", "likely", and "certain" are used to define the scale, with the chance of triggering or observing avalanches increasing as we move up the scale. For our purposes, "Unlikely" means that few avalanches could be triggered in avalanche terrain and natural avalanches are not expected. "Certain" means that humans will be able to trigger avalanches on many slopes, and natural avalanches are expected.
Size of Avalanches
Avalanche size is defined by the largest potential avalanche, or expected range of sizes related to the problem in question. Assigned size is a qualitative estimate based on the destructive classification system and requires specialists to estimate the harm avalanches may cause to hypothetical objects located in the avalanche track (AAA 2016, CAA 2014). Under this schema, "Small" avalanches are not large enough to bury humans and are relatively harmless unless they carry people over cliffs or through trees or rocks. Moving up the scale, avalanches become "Large" enough to bury, injure, or kill people. "Very Large" avalanches may bury or destroy vehicles or houses, and "Historic" avalanches are massive events capable of altering the landscape.

After a welcome refresh of new snow on Tuesday/Wednesday, with 6-8″ in Turnagain Pass and closer to 12″ in upper Girdwood Valley, there is a lot of soft snow on the surface right now! Unfortunately, that new snow was immediately followed by moderate to strong NW winds that will easily transport the new snow into wind slabs up to 2′ deep on leeward aspects. These are most likely to be found on upper elevation ridgelines, cross loaded gullies, and convex rolls. The new snow fell onto a weak and faceted old snow surface which could make wind slabs release on lower angle terrain than typical and could cause them to propagate more easily to create a larger avalanche.

To identify areas with wind slabs it is important to pay attention to the local wind direction. Using your ski poles and stepping out of the skin track to feel for stiffer or hollow feeling snow on the surface is a great way to get a sense for the wind loading patterns in your area. Using small test slopes is also a good way to see how reactive the new surface snow is before exposing yourself to larger slopes (see illustration below).

In areas that received more new snow (10″+) storm snow avalanches up to 1′ deep are possible as the layer of new snow settles and starts to gain some strength. We saw easy failures in our snowpit tests yesterday at the interface of the new snow and old snow surface, but there wasn’t enough strength in the slab to cause propagating factures. Today the slab has likely gained some strength and we could see human triggered avalanches in sheltered locations that received a lot of snowfall yesterday. We don’t have much information on avalanche activity due to low visibility yesterday, so let us know if you see any recent avalanches!

Loose snow avalanches (aka sluffs) are likely on any steep terrain features that haven’t seen much wind affect. 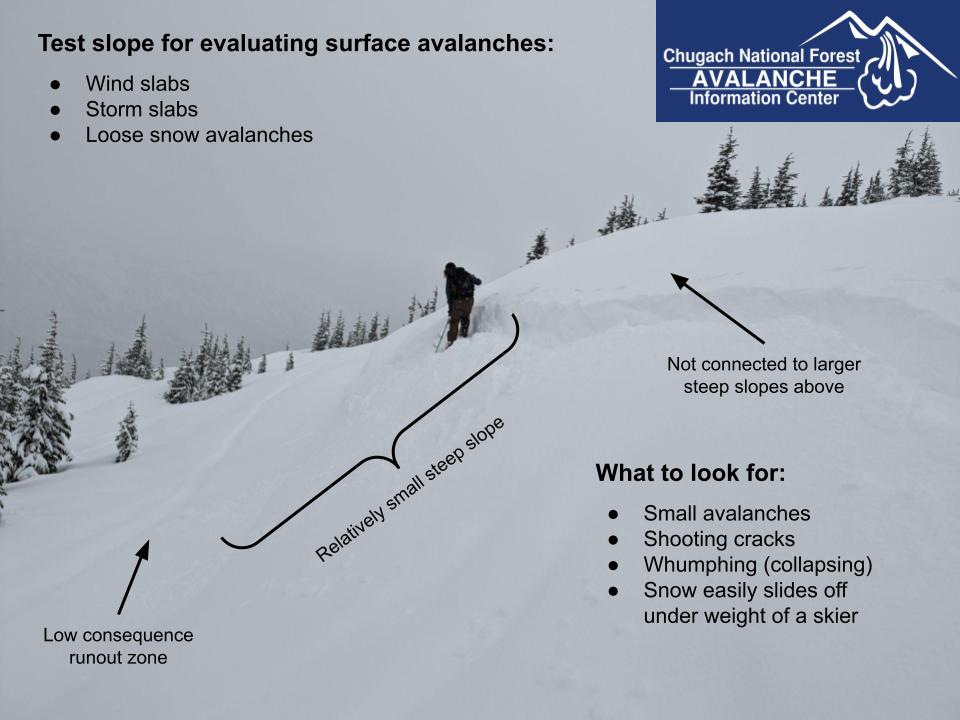 Example of using a test slope to check for surface avalanches. Photo 12.7.22

Yesterday: Light snowfall yesterday morning added another 1-2″ of snow as the storm moved out. Moderate to strong NW winds picked up in the morning and blew throughout the day with averages of 10-20 mph and gusts to 30 mph in most locations. Areas more exposed to gap winds, like Turnagain Arm and higher elevations, saw higher wind speeds with averages of 25-35 mph and gusts of 50-70 mph. Cloud cover obscured the mountains in the morning but was gradually lifting in the afternoon and looks to have cleared overnight.

Today: No new snowfall is expected today. Colder temperatures, NW winds, and clearing skies are expected. Temperatures will start off in the low twenties to teens and drop into the low teens and single digits today. Winds should remain out of the NW with averages of 15-25 mph and gusts of 30-40 mph.

Tomorrow: Friday looks very similar to today with temperatures continuing to drop into the single digits, clear skies, and NW winds. Wind speeds will remain relatively constant throughout the day and start to taper off slightly on Friday evening. Our next snowfall is expected on Sunday evening and Monday.