The avalanche danger remains MODERATE above treeline on all aspects. At elevations above the stout surface crust, watch for stubborn wind slabs and give a cornices a wide berth. Additionally, there is still chance a person could find the wrong spot and trigger a deep slab avalanche in weak snow near the ground.

At elevations at treeline and below the avalanche danger is LOW.

SUMMIT LAKE: With a shallower snowpack in this area, triggering a large slab breaking in faceted snow near the ground is more likely. Observers continue to find concerning stability test results and are experience whumpfing.

Although there were no new avalanches reported yesterday, we did get a photo of what appears to be a cornice fall that triggered a deep slab avalanche in upper Bertha Creek (Gold Pan) area; unknown as to when this occurred (photo below). We also received additional information and high quality photos of the deep slab that was triggered on the west rib of Tincan Proper yesterday (12.3). A big thank you to the skier who skied first and passed along his story of the avalanche HERE. 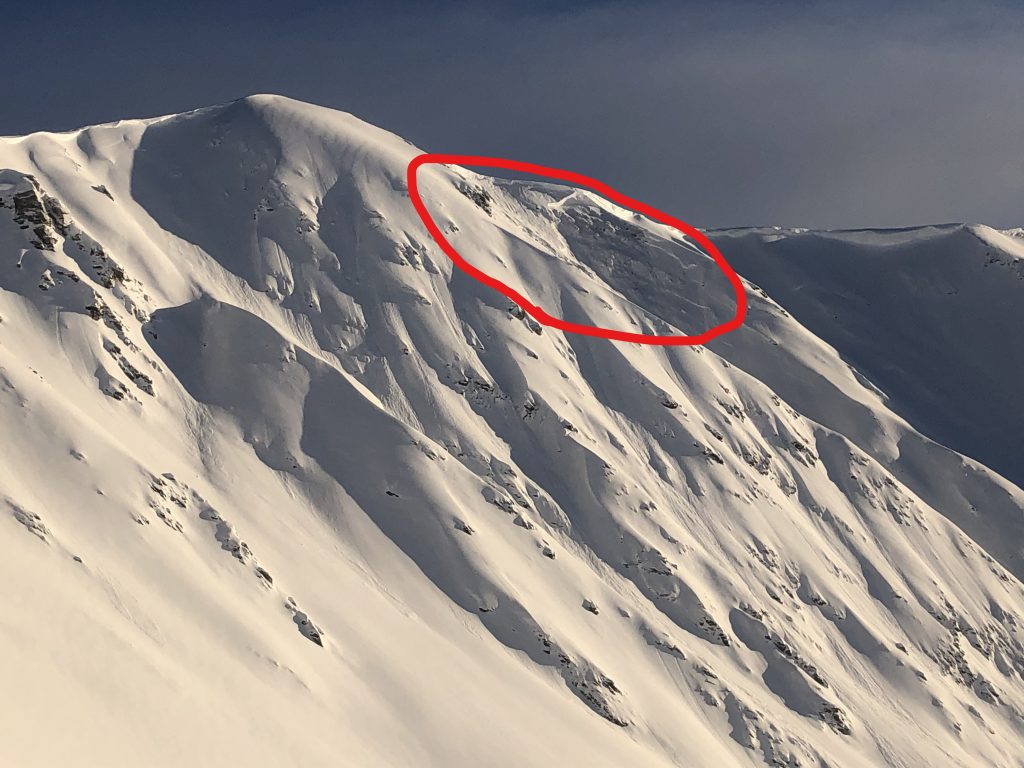 Cornice triggered deep slab in upper Bertha Creek (Gold Pan). It does have a relatively fresh look, yet it is unknown the time or if it was triggered naturally or by a person on the ridge. Photo from 12.4.20 by Alan Abel. 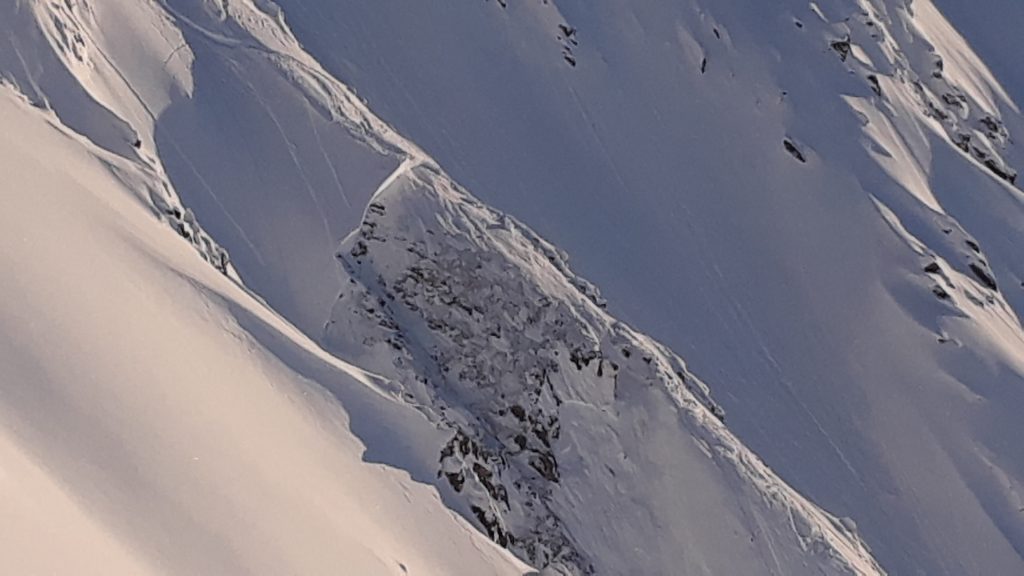 West Rib of Tincan Proper skier triggered avalanche from 12.3.20. Note the rocky bed surface and up to 7′ crown, a clear sign the avalanche broke in the basal facets at the bottom of the snowpack. Photo taken 12.4.20 by Matthew Howard. 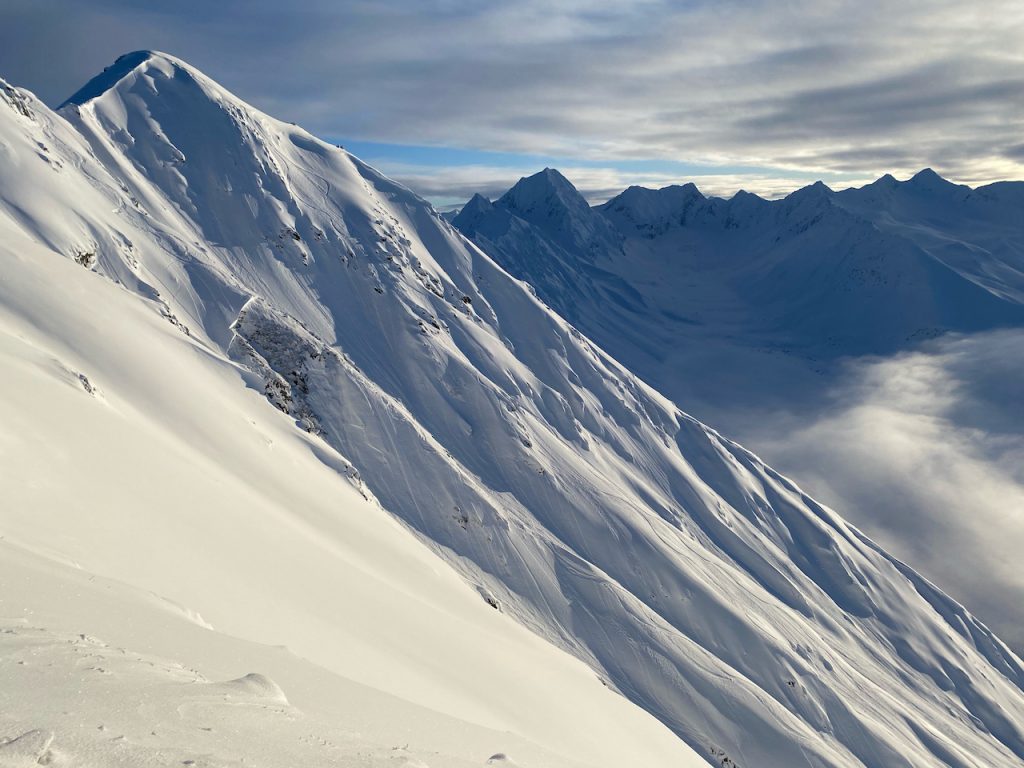 A wider angle view of the same Tincan avalanche. Photo taken on 12.4.20 by former CNFAIC Director Kevin Wright – thanks Kevin!!

As we can see in the photos above, the weak snow near the ground still has us on guard. Triggering a deep persistent slab, however unlikely, is not out of the question. This issue is at elevations above the dust on crust which is right around 2,500′ and above. Keep in mind, these deep slabs don’t typically give you any signs of instability and all can seem safe and stable before the slope cracks. They often release when someone hits a shallow part in the snowpack, often near rocks, affecting the weak layer. This why they are known for being triggered with the 2nd, 10th or any number of people on the slope.

Shallow snowpack zones:  The south end of Turnagain Pass, Lynx Creek, Silvertip and Summit Lake all sport a shallower snowpack. Triggering a deep slab in these areas is more likely and extra caution is advised.

With a sunny Saturday ahead and easy travel into the Alpine, we can’t forget there are still booby traps lurking. If you are headed to the big game terrain, be sure to keep a close eye on your partners, have an escape route planned and really know your safe zones. Add to that, are there other groups around you on the same terrain to keep an eye on as well?

Otherwise, on the surface, keep an eye out for old stubborn wind slabs. They may still be able to pop out in steep rocky terrain.

Cornices:  These may still be teetering on the brink along ridgelines. Cornice falls are a significant danger in themselves, but could also trigger a large avalanche below. Give them a wide berth. 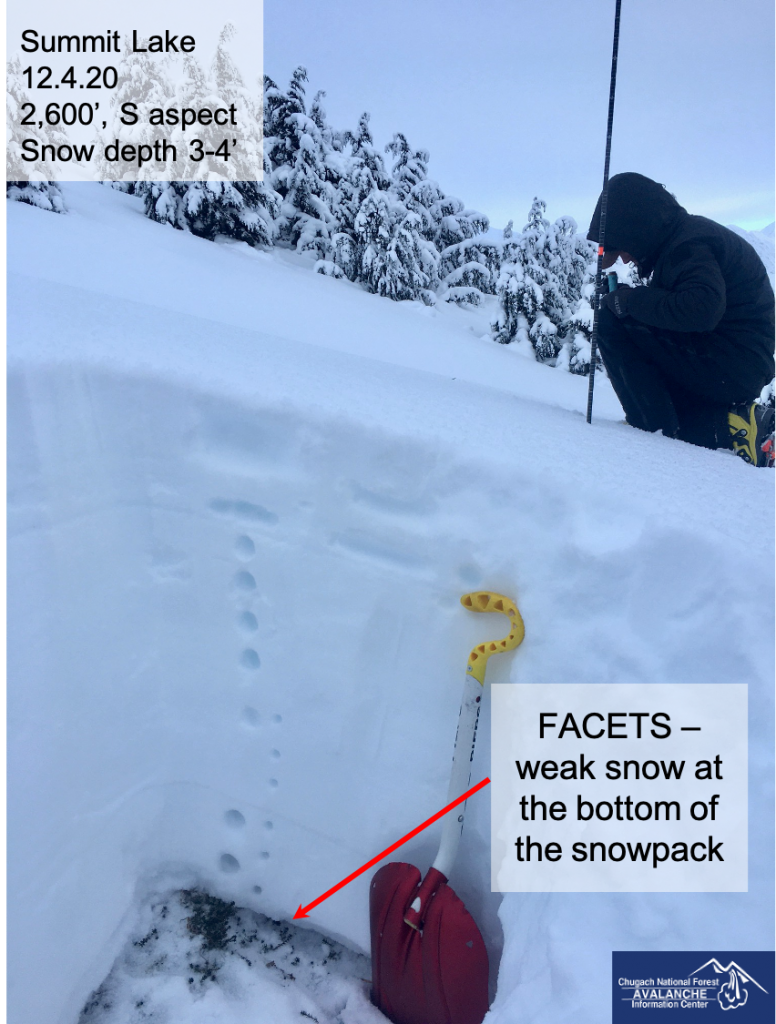 Yesterday:  Scattered high clouds with valley fog was over the region yesterday. Winds were light and variable and temps were chilly, in the teens to single digits.

Today:  Mostly sunny skies with patchy valley fog is expected. Winds should pick up just slightly from the NW and blow in the 5-15mph range. Temperatures have plummeted and sit in the single digits at the parking lots this morning as well as the ridgetops.

Tomorrow:  Clouds should start moving in ahead of the next storm system tomorrow morning. Snow is forecast to fall tomorrow afternoon with a couple inches accumulating by sunset. Temperature will rise with the precipitation and possibly get back into the 30’sF by Monday. Stay tuned.