The avalanche danger remains CONSIDERABLE at the higher elevations, above 2,500′, on all aspects. Human triggered slab avalanches, 2 feet deep or more, are likely on slopes 35 degrees or steeper. This is due to weak snow underlying the new settled snow from the past several days. Avalanches could be triggered remotely (from the bottom, side or above a slope). Careful route finding and conservative decision-making is essential.

At elevations below 2,500′, the danger is MODERATE where triggering a large slab avalanche, as described above, is possible.

It is the old sugary snow with various layers of buried surface hoar that is sitting under all the new wonderful fluffy snow that’s the problem. At the lower and mid-elevations, it’s hard to discern that there would be any funny business 2-3′ below our feet – but unfortunately there is. In many areas folks have been traveling, that 2-3′ of new snow has been so light it’s just making for great powder turns and deep wallowing. But, as we found yesterday, getting into areas at the higher elevations and where the winds blew prior, the new snow isn’t as loose and is just cohesive enough to be a slab sitting on a weak layer. In short, the weak layer is guaranteed. It’s whether or not the snow on top is behaving like a slab. If so, we have a good chance at triggering a large avalanche, up to 2′ or more in depth if the slope is steep enough.

Paying close attention to any whumpfing in the snowpack or cracks in the snow surface that shoot out from us will be our main clues we’ve found a slab. Yesterday on Seattle Ridge my partner and I ventured to an area that had some wind effect several days ago and had not been traveled since the new snow. We had several large wumpfs and shooting cracks; it was a no brainer for us to stick to the more mellow slopes at that point. That said, there are slopes not showing these signs, mostly below the treeline, and it can be tough to know what is safe and what is not. When in doubt, we can just stick to slopes under 35 degrees with nothing steeper above us.

Safe travel protocols are key if choosing to get into steeper terrain. This is exposing only one person at at time, watching our partners closely, having an escape route planned if the snow does move.

Some other things to consider as we head into several days of clearing weather: 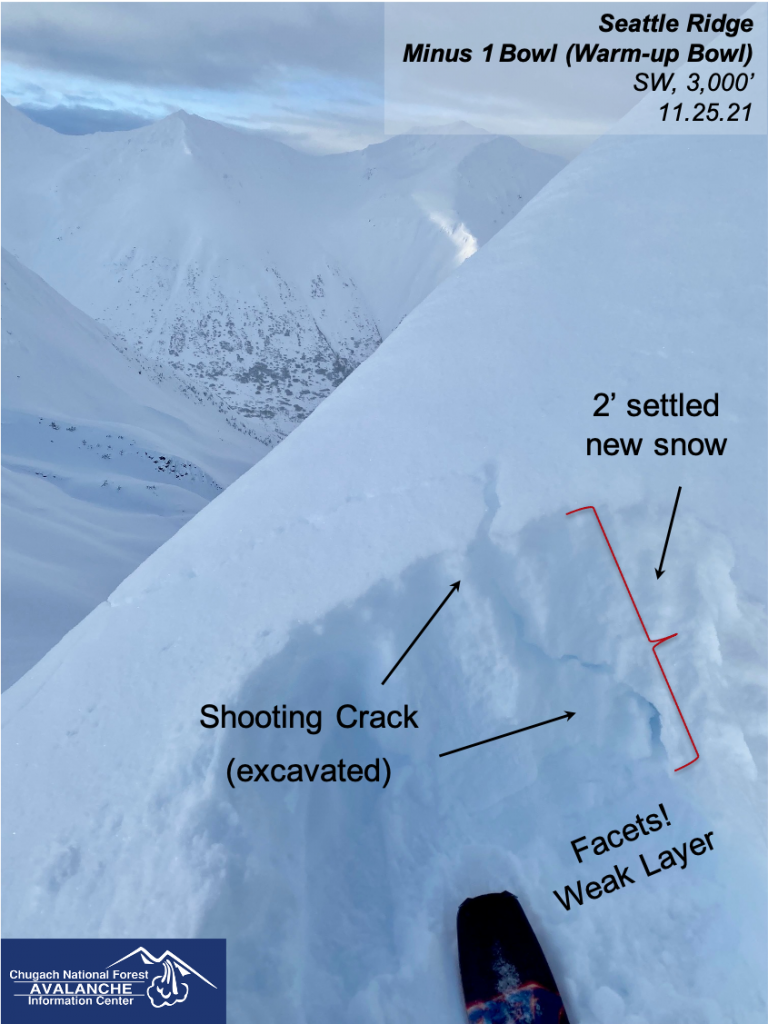 Area of large collapse (whumpf) and subsequent shooting cracks. This shooting crack was excavated to see where the weak layer was. Minus 1 Bowl (Warm-up Bowl) on Seattle Ridge 11.25.21.

A handful of glide cracks are still opening around the region. We have not heard of a release into an avalanche for several days now, but we should still watch for cracks and limit any time under them as they truly are unpredictable and unsurvivable.

Yesterday:  Mostly cloudy skies with light snowfall here and there. Some clearing in the afternoon. Ridgetop winds were calm to very light from the northwest. Temperatures were in the 5-15F range.

Today:  Mostly clear skies with some valley fog possible today. Ridgetop winds could bump up to 15mph from the northwest at times, but should remain mostly light in the majority of the forecast area. Temperatures are cooling back into the minus single digits at high elevations and the single digits in valley bottoms.

* Precipitation sensors are struggling to accurately capture the snowfall totals from the past few days.