The avalanche danger will be CONSIDERABLE at the upper elevations today.  On northerly aspects, dry snow and winter conditions exist. Triggering a slab avalanche 1-3′ thick is possible and very cautious travel and snowpack evaluation is recommended.  On southerly aspects, sunny skies and daytime warming are expected to create natural wet loose avalanches in Thursday’s new snow and human triggered wet sluffs are likely. A MODERATE danger for wet loose avalanches exists in the mid elevations. Give cornices a wide berth as they have grown and limit/avoid travel under glide cracks.

PORTAGE VALLEY:    Cornice fall and/or avalanches from above have the potential to send debris to valley bottoms and through snow-free zones. Travel along hiking trails, such as the Byron Glacier Trail with steep slopes overhead, is not recommended this afternoon/evening during the heat of the day.

Today is the first sunny day after a storm. That’s red flag #1. Sunny skies and daytime heating, red flag #2. The #3 red flag… a layer of weak faceted snow under the new snow on upper elevation northerly aspects. That said, there are a number of avalanche issues today. The good news is, many of them are easy to see and avoid. The one exception is the dry slab avalanche potential on high north aspects. It may be snow-free in the parking lots, but the mountains received between 1-2+’ of new snow with strong wind above 2,500′. For those seeking the dry powder, this is the most likely place to get into trouble. See the National Avalanche Center Director Karl Birkeland’s video below from Tincan yesterday. A winter mindset is crucial for those heading to upper elevation northerly aspects.

What we can do is watch for recent slab avalanches and cracking or collapsing (whumpfing) in the snowpack; yet these obvious signs of instability are likely not to be present. Digging a pit, as Karl did, and testing the weak layer is a great way to assess the snowpack as long as your pit reflects the same aspect/elevation of the slope in question. But really, it’s tough to know how dangerous a slope is with this set up. It could be the 2nd or 12th person on it before it slides, or it may not slide at all. Sticking to lower angle terrain with nothing steep above is a good option. Waiting a couple days for the pack to adjust is another good option. It’s spring and we all want to end the season making it back to the parking lot.

Cornice falls:  Cornices just got bigger and warming will help destabilize them further. Give them an extra wide berth and be careful not to mess with them if anyone is below.

As the day warms up, be extra cautious of steep sunny slopes. Both natural and human triggered wet sluffs composed of the new snow will be likely, especially at the upper elevations. Depending on the amount of new snow, these could be larger than expected and run to valley bottoms in places. Considering exit routes will be key, as we don’t want to be caught in the gun barrel at the wrong time of day. Roughly 10″ of new moist snow was reported near treeline (~2,000′) on Tincan yesterday and a small dose of afternoon heating induced a few roller balls and small sluffs; we are expecting a larger shock from the sun today. 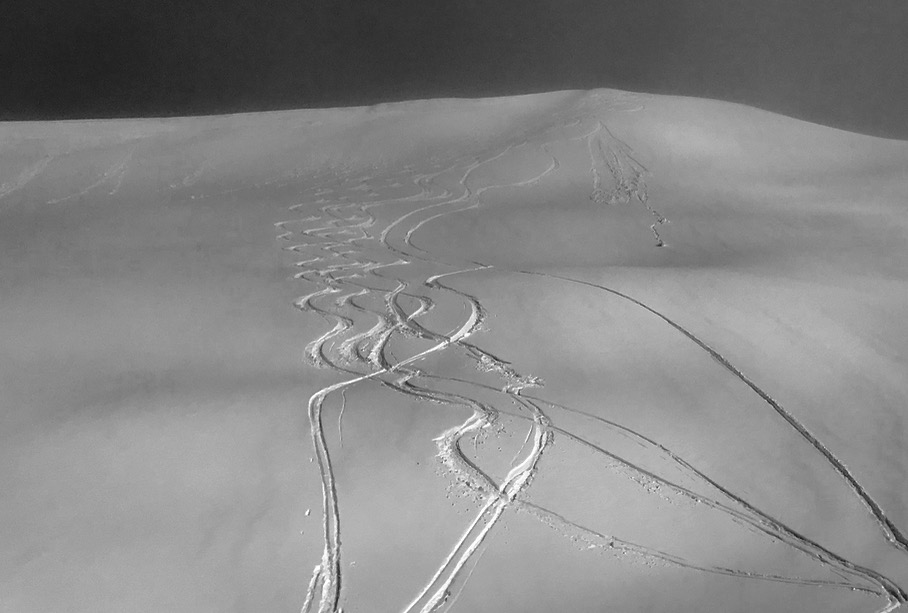 Mini wet loose sluffs that were skier triggered on the steeper portions of Tincan’s Common Bowl. 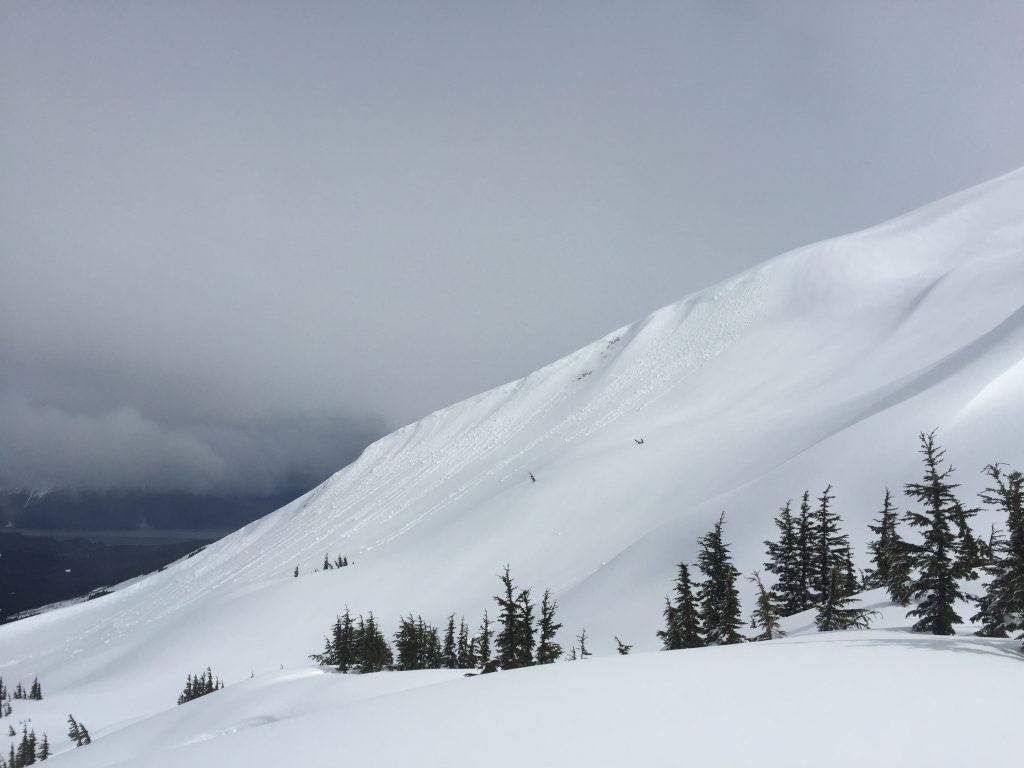 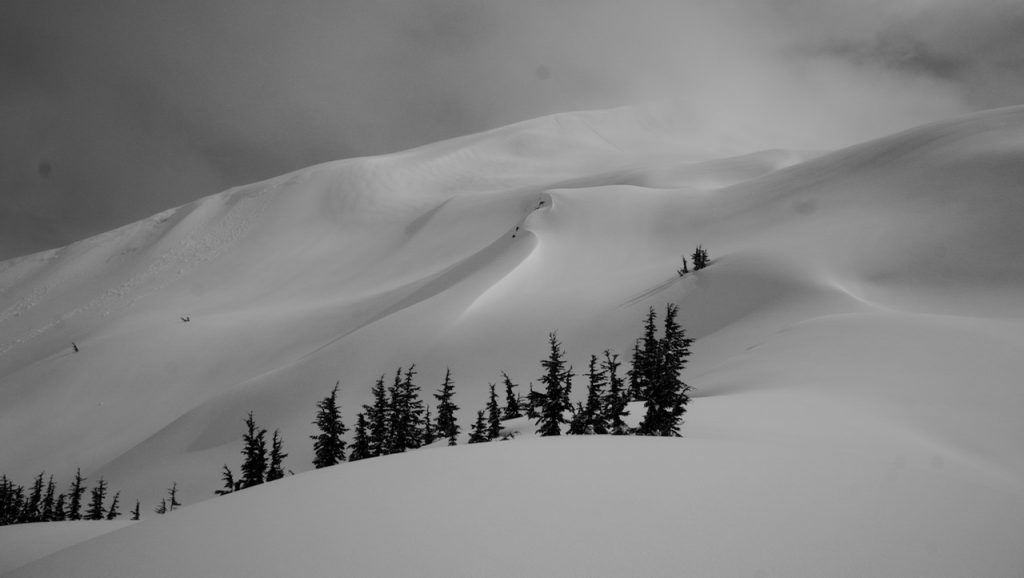 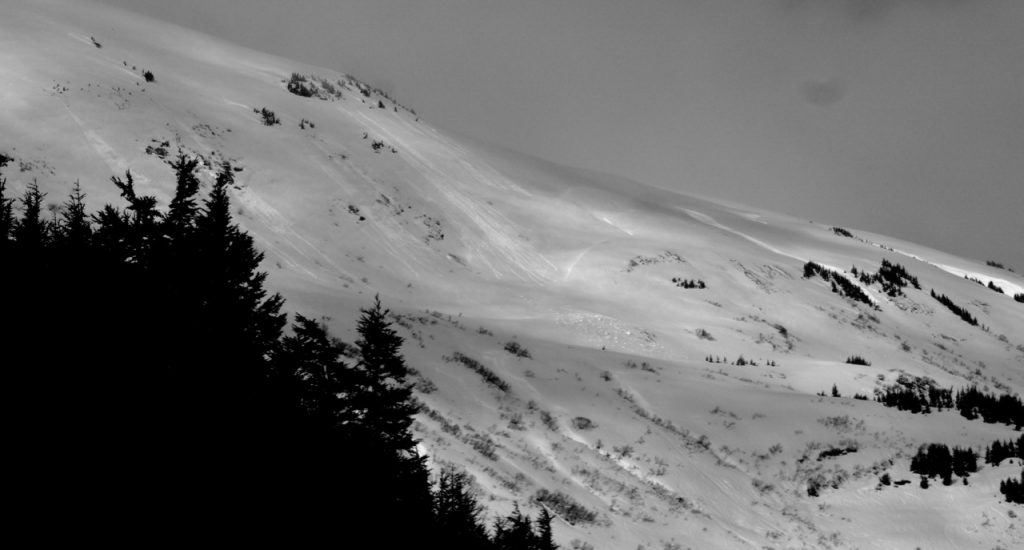 Glide cracks are likely to be somewhat obscured as the new snow has been filling them in. However, if you do see a crack it is likely moving and a sign to avoid traveling under it. It has been several days now since we know of any cracks that have released into avalanches, but that’s not to say one could pop out today and catch someone in the wrong place at the wrong time. Keep your eyes out!

Yesterday:   Cloudy skies becoming partly cloudy over the area as a frontal system moved out midday. Light precipitation was seen before noon adding 1-2″ of snow above 2,000′ in Girdwood Valley and around 1″ at the higher elevations at Turnagain. Ridgetop winds were easterly averaging in the 5-15mph range with gusts into the 20’s. Temperatures were in the mid 20’sF along ridgelines and 30’sF at 1,000′.

Today:   Mostly sunny skies are expected over the region. Ridgetop winds should be light (~5mph) and from the east. Temperatures have cooled to 30F at most elevations below 2,500′ and should climb into the mid 30’s to 40F by the afternoon. Above 2,500′, temperatures should climb to near 30F.

Tomorrow:   Another sunny day is on tap for Sunday as well as Monday and Tuesday. Each day looks to get progressively warmer despite cool nights with freezing temperatures. Hints of another system moving through are showing for Wednesday/Thursday.

*Seattle Ridge wind sensor was rimed over yesterday morning and data only exists from 1pm till 6am.