The avalanche danger is MODERATE on slopes over 35 degrees above 2,000′. Triggering an older wind slab resting on weaker faceted snow is possible. Slabs could be anywhere from 4″ to 2′ thick depending on prior windloading. Steep rocky terrain will be the most likely place to find one of these avalanches.  Additionally, sunshine with warm temperatures may cause wet sluffs on steep southerly terrain. As always, give cornices a wide berth and limit exposure under glide cracks.

GIRDWOOD / PORTAGE / PLACER:   Old wind slabs could be deeper, up to 2′ thick.

SUMMIT LAKE / JOHNSON PASS:    Triggering a larger, more dangerous slab remains a concern due to  various old weak layers in the mid and base of the snowpack.  Conservative terrain choices and a cautious mindset is advised  if choosing to venture into the further reaches of this area.

SEWARD / LOST LAKE:   Old wind slabs up to 2′ in depth could be found and triggered in this area on steep windloaded slopes.

Take a minute out of your day to help the Community Snow Observations crew with gathering snow depth information in Alaska!! Website is  communitysnowobs.org. It’s easy to do, you just need a smart phone, 30 seconds and your probe to measure the snow depth.

After quite the pummeling by the outflow winds last week, the snowpack has had a couple days to rest under clear skies and light winds. As we head into today and into the work week, the quiet weather is expected to remain, allowing the snowpack to continue to adjust and stabilize. We have not heard of, or seen, any avalanche activity since Thursday when the NW wind event wreaked havoc. This event triggered large natural avalanches in the Summit Lake area on the Kenai as well as some other areas along Turnagain Arm and in the Portage Valley. The snow surface above treeline is a mixed bag of sastrugi, scoured areas, wind drifts, wind crust and wind slabs. That said, many areas are reported to still harbor soft fun snow and escaped the brunt of the damage.

The avalanche issues today revolve around older weak layers within the snowpack (persistent weak layers). The most recent weak layer was buried a week ago and sits around a foot deep under the wind affected snow and wind slabs. This layer has been showing signs that it could still be reactive but is on a downward trend. The second layer down is the MLK Jr buried surface hoar. This layer is showing signs of only being reactive in the Summit Lake zone. Also in the Summit Lake region is weak snow near the ground.

If you are headed out today watch for: 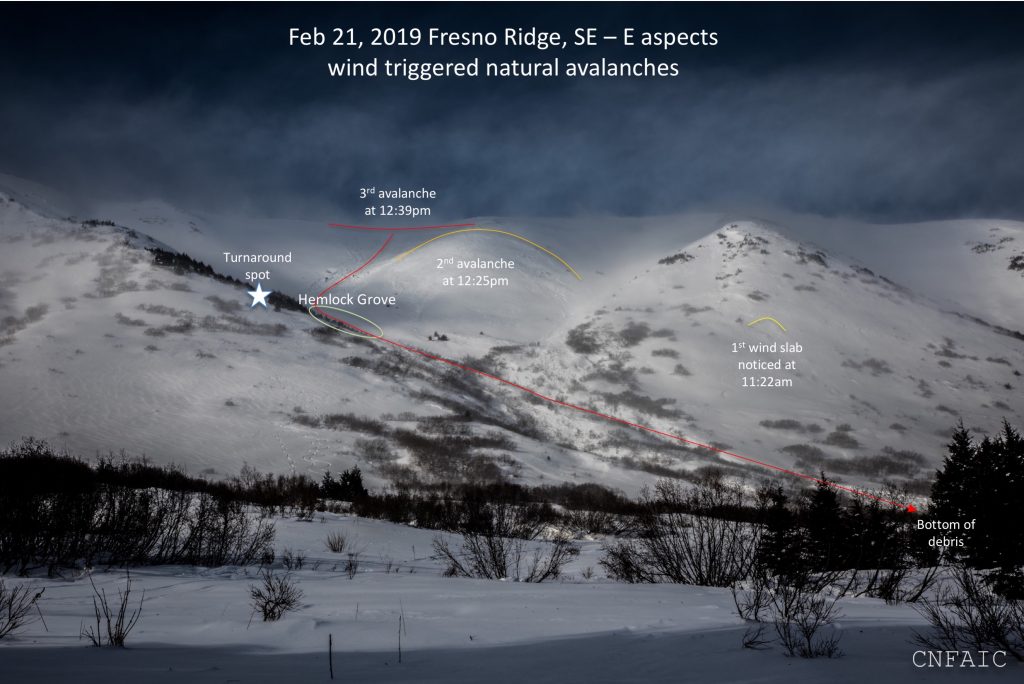 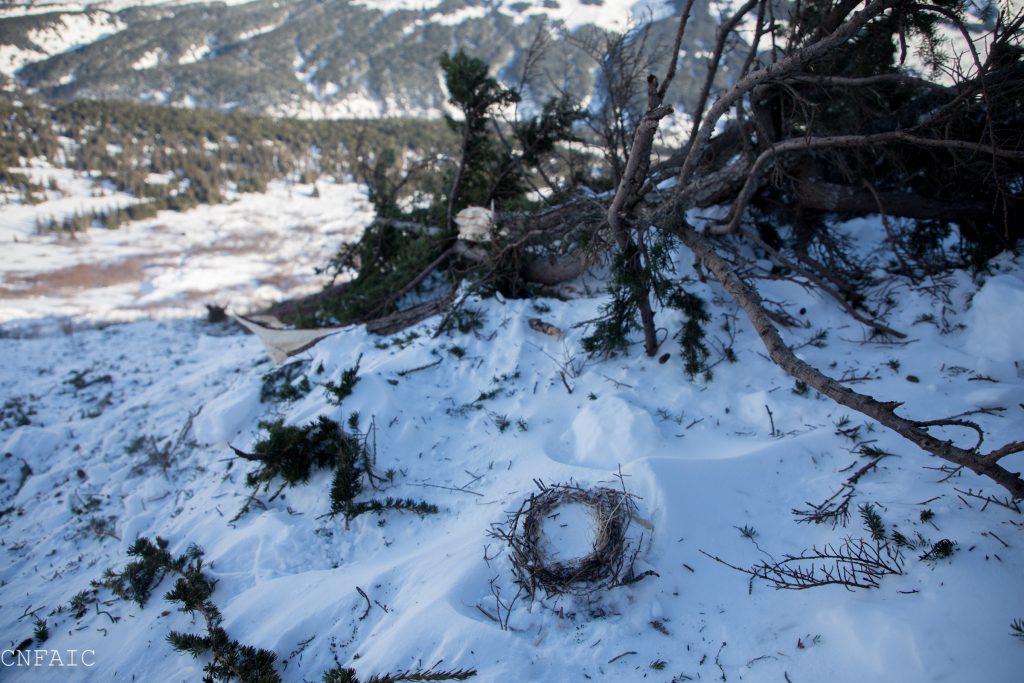 Make sure to check out Heather’s write up from the natural avalanche cycle on Fresno in the Summit area on 2/21. This event highlights the importance of matching avalanche terrain to the potential size of an avalanche. In this case, a portion of the fast moving debris overshot the main avalanche path and pushed up and over a subridge of hemlocks.

For the snow geeks out there, a persistent weak layer round-up: 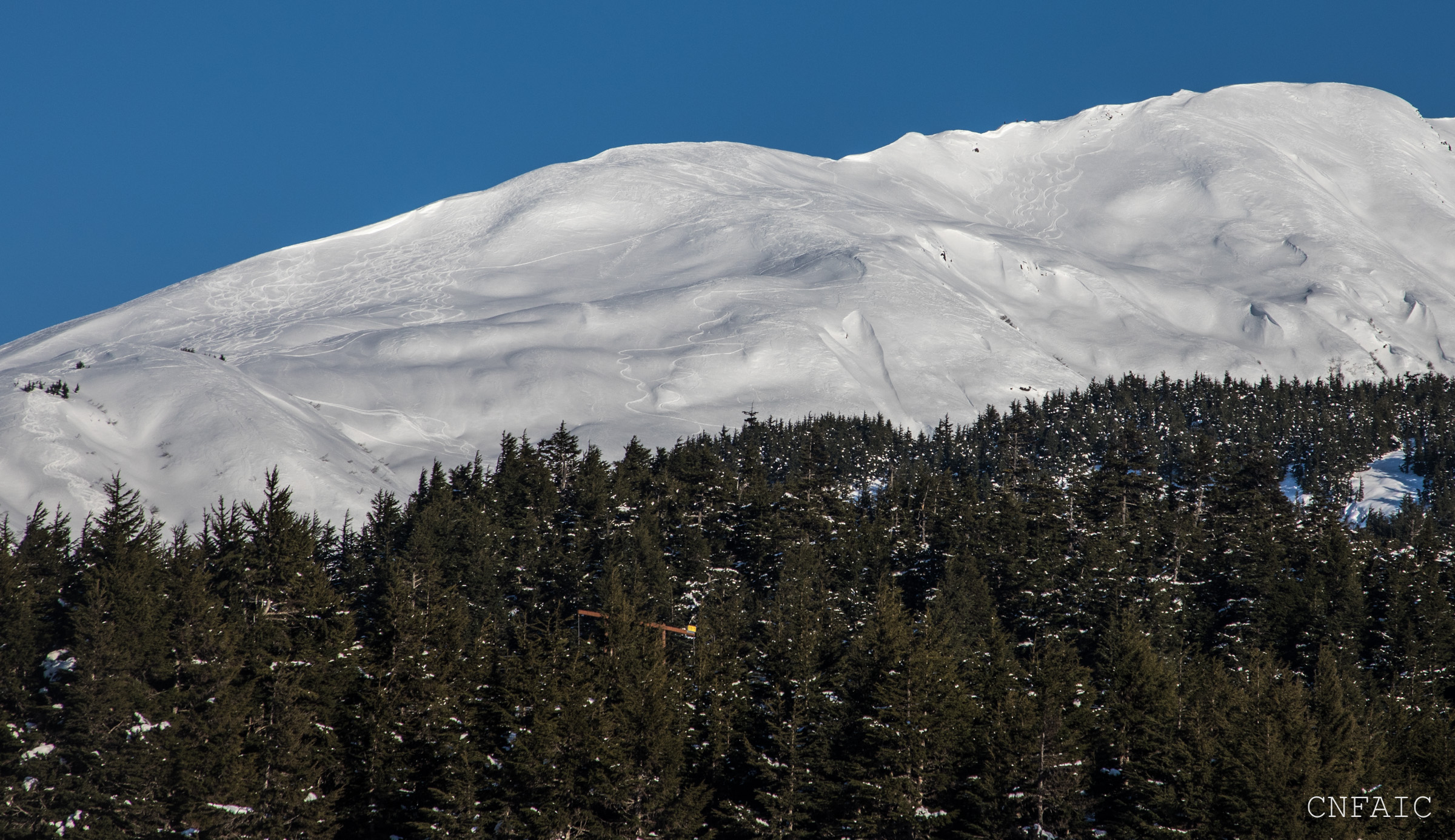 New glide cracks are opening up around our region and some are filled in and apparently not opening up. The last known glide release was on the south side of Goat mountain in Girdwood Valley on Tuesday 2/19. The best way to manage this problem is to avoid traveling on slopes directly below glide cracks. A short list of known cracks in popular zones:  Magnum, Lipps, Seattle Ridge, Eddies, Lynx Ck. 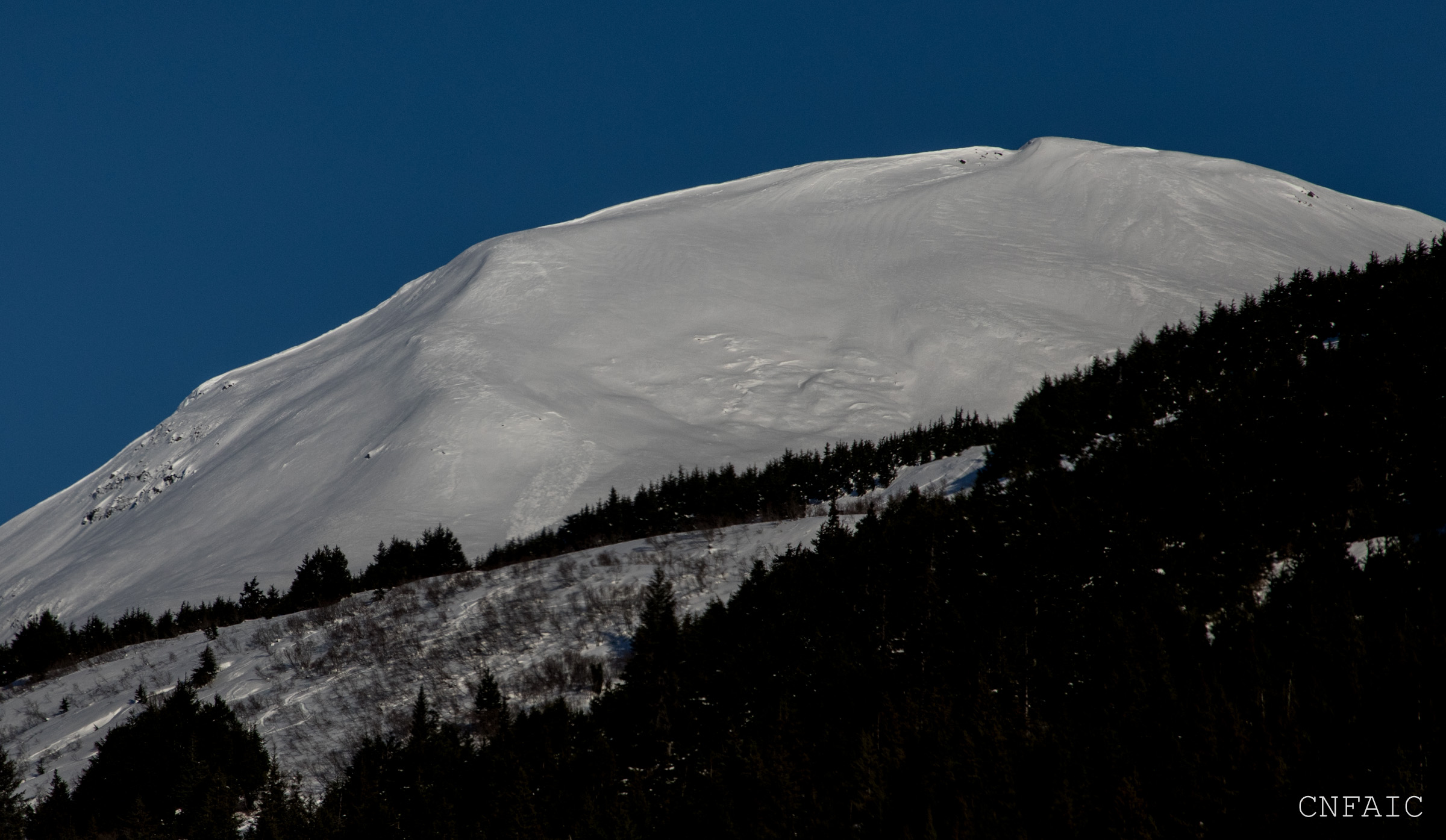 Small older wind slab on the lower SW shoulder of Lipps. Also, an old filled in glide crack is not easily seen, but the ‘crumpled’ up snow in the middle/lower portion of main slope is discernible.

Yesterday:   Sunny skies prevailed region-wide. Ridgetop winds were light from a generally westerly direction. Temperatures hit 30F at many lower elevations with ridgelines in the 20’sF. A strong inversion has set up again overnight with cold air pooling in valley bottoms and at sea level. This morning temperatures at the mid and upper elevations are in the mid 20’sF while valley bottoms and sea level temperatures are in the single digits.

Today:   Other than a possibility for some valley fog, today will be a carbon copy of yesterday. Sunny skies, light winds from the west and temperatures in the 25-30F range above the cold air trapped in valley bottoms. The cold air should mix out again in the afternoon warming parking lots and lower elevations to near 30F.

Tomorrow:   The ridge of high pressure over the region looks to remain in place through the work week and possibly into the weekend. Sunny skies, some chance for valley fog, cold temperatures in low-lying areas and warm temperatures at the higher elevations are to be expected. Don’t forget your sunglasses!