The South Fork area received 26 inches of snow during a storm on March 16 and 17. Ten days later, on March 26, another storm deposited 14 inches of snow. These storm layers, which comprised the slab, rested on a shallow layer of intermediate facets formed during an extended cold period earlier. The weather on the day of this incident was calm, clear, and sunny, with temperatures in the mid-20s.

On Thursday afternoon, March 28, Skip Repetto (38), and John Stroud (33), both from Anchorage, were telemark skiing on the east side of the South Fork of Eagle River, roughly seven miles southeast of Eagle River. Stroud had brought along his two large dogs (each weighed about 130 pounds). Both men carried beacons, probes, and shovels.

They were in what the locals call the Three Bowls area—essentially one large west-facing bowl, but with aspects facing north, west, and south. The men and dogs started up a ridge near the northern-most bowl. Near the top of their climb—above 4,000 feet elevation—they dug a quick pit with their hands, isolating only the top two layers. The two concluded that the top two layers were well bonded, so they skied from the ridge to the bottom without incident.

Then they climbed their skin track back to the top and traversed south along the ridgeline to a different ski line near the south bowl. They skied down about 1,500 feet to about the 2,600 foot elevation, and both noted a change in the snow conditions that somehow felt less stable. Repetto was feeling uncomfortable with the consistency of the snow, so they talked it over and decided to change to a more northerly aspect. This required crossing a deep V-shaped creek bed to get to a steeper slope to get in a few more turns.

Around 15:15, Repetto told Stroud to stay in his current safe location – they would cross the next slope one at a time. Repetto crossed the creek bed and onto the north aspect. He proceeded about 50 feet, only to look back to see Stroud and his two large dogs following his track on the suspect slope, about 125 feet back. The weight of the two skiers and the two large dogs triggered the slide, which propagated above the skiers and dogs and across the drainage to steeper terrain. Because of his position on the slope, Repetto was able to stay on his feet and ski to safety. Stroud attempted to ski to the opposite side of the drainage with his two dogs, but was quickly knocked off balance and overcome by the moving snow. His skis and poles acted as anchors, pulling him down as he fought to stay on top. Several times, Stroud grabbed at the stand of alders near the edge; investigators later noted hand and finger marks left in the bed surface. His attempts were unsuccessful, and he was swept down the drainage and buried. He traveled an estimated 500 feet, eventually coming to a stop on the right side of the debris, near the toe.

Stroud later remembered that while he was buried, that the only thing he could move was his left index finger, and that, less than an inch. Neither he nor his dogs were visible to Repetto.

With no visible surface clues, Repetto skied to the toe of the debris, put on his climbing skins so he could ski more easily on the debris, and switched his transceiver to receive. He immediately picked up a signal and followed it to an area at the edge of the debris. He pulled out his probe and shovel, and pinpointed his friend’s location. After a few random probes, he hit Stroud in the back.

Stroud was buried beneath three to four feet of debris, lying across the slope, head slightly downhill. Repetto estimated it took him 35 to 40 minutes after burial to gain an airway, by which time his friend appeared to have quit breathing. Repetto cleared the snow from Stroud’s head and mouth, at which point Stroud started to gasp for air. Stroud did not respond to verbal communication for around 10 minutes, but eventually came around. It took Repetto another 20 minutes to excavate enough snow to remove Stroud. His skis and poles were still attached.

By coincidence, Kip Melling, a resident of Eagle River, was looking out his kitchen window and noticed a fresh avalanche in the Three Bowl Path. Melling was an avalanche instructor with the Alaska Mountain Safety Center and a member of the Anchorage Nordic Ski Patrol. He was also the first responder for another accident earlier the same season, 20011111. Earlier in the day, he and a friend had skied in the Three Bowls area, and they had seen the two men and two dogs.

Melling gathered up his ski and avalanche gear and drove the 1.3 miles to the trailhead. The red Toyota truck he had noticed earlier in the day was still parked there. He climbed 10 minutes up to the avalanche area and saw the two men at the toe of the debris. Stroud and Repetto were visibly shaken by the event. There were no serious physical injuries to either, though both dogs were still missing. Melling brought Stroud and Repetto back to his house to recuperate, warm up, and talk before they made the drive back to Anchorage.

Stroud and several friends attempted to recover Stroud’s two dogs on Friday, March 29, without success. Lacking an accurate last-seen area and sufficient resources, they called off the search for the dogs.

The accident site consisted of a steep, northwest-facing bowl, with a slope angle of 35 degrees in the starting zone. The slope was steep, smooth, and uniform, and then it narrowed into a high-consequence terrain trap (a creek drainage) at the base. The avalanche released at an elevation of about 4,000 feet and fell 1,600 feet vertical. The crown was one to two feet deep and 1,500 feet wide. It probably would be classified as SS-ASu-R3-O, though the debris was a mix of soft slab and hard slab snow. Debris depth in the runout zone ranged from two feet to over 10 feet and consisted of pencil-hard slab blocks and soft-slab debris, intermingled with unconsolidated, faceted snow.

Had the men dug a pit on the slope that avalanched, they likely would have seen two separate layers of weak facets. One or both of these layers was where the avalanche failed.

This avalanche incident is a remarkable account of experienced skiers traveling in high- risk avalanche terrain. They knew the terrain was dangerous and accepted that risk. They carried full rescue gear, they dug a hand pit to check layering (though this did not provide data on the slope that avalanched), they were paying attention to changing snow conditions, and for the most part, they tried to ski one at a time.

But a few lapses in their data-gathering and safe-travel procedures contributed to the accident. First, the hand pit done earlier in the day and near the top of the bowl gave no data whatsoever to the snow stability on the slope where the avalanche re- leased. A few minutes digging a second pit might have revealed the facet layer(s) where the avalanche released.

Second, there was a breakdown in communication between the two men that led to both men and two large dogs crossing the avalanche path at the same time. That certainly was not what Repetto had intended, which was to cross one at a time. The weight of two skiers and two big dogs—the equivalent of four people—was more stress than the slope could withstand. Repetto’s experience and skill at using his beacon was the ultimate lifesaver. 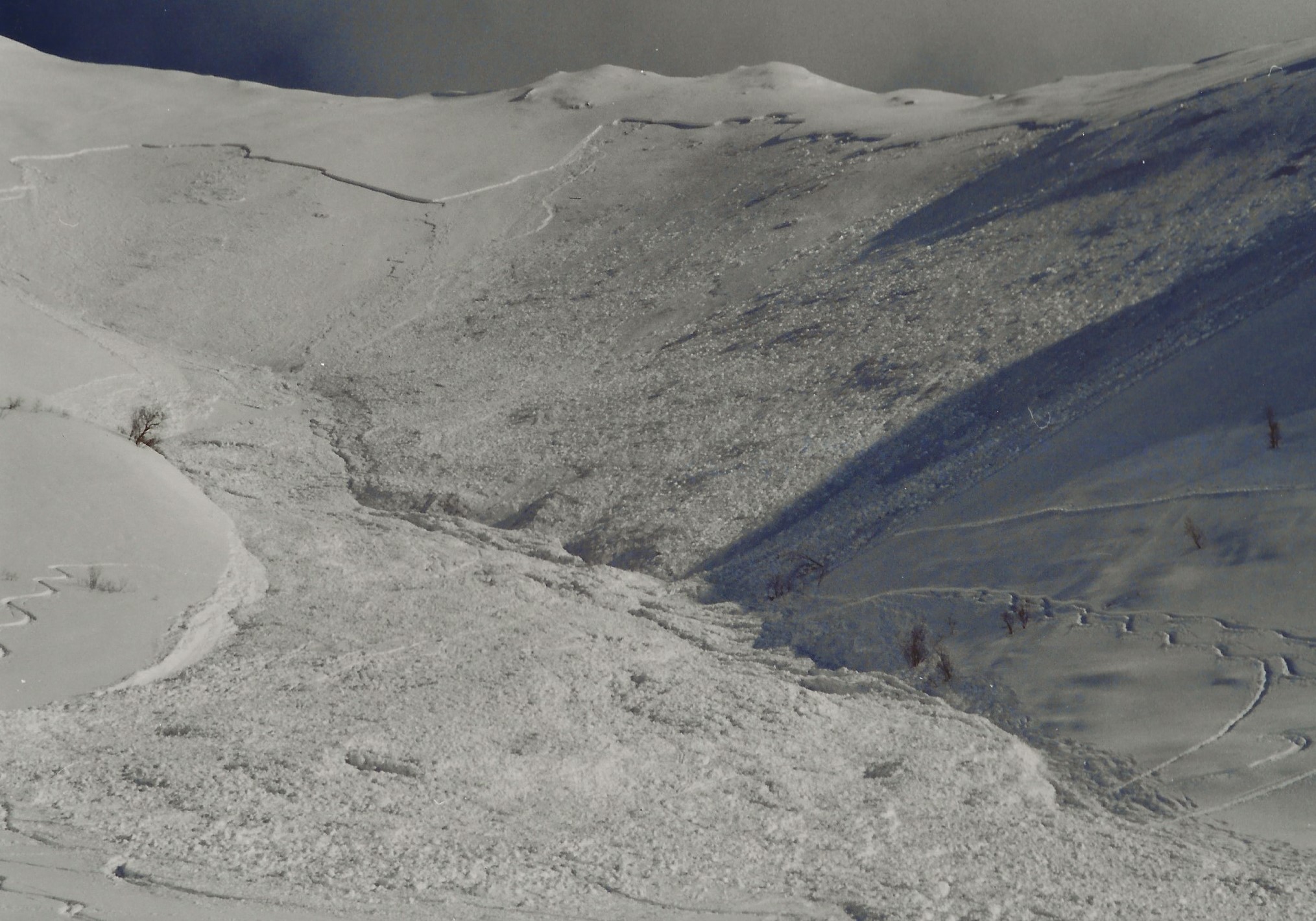 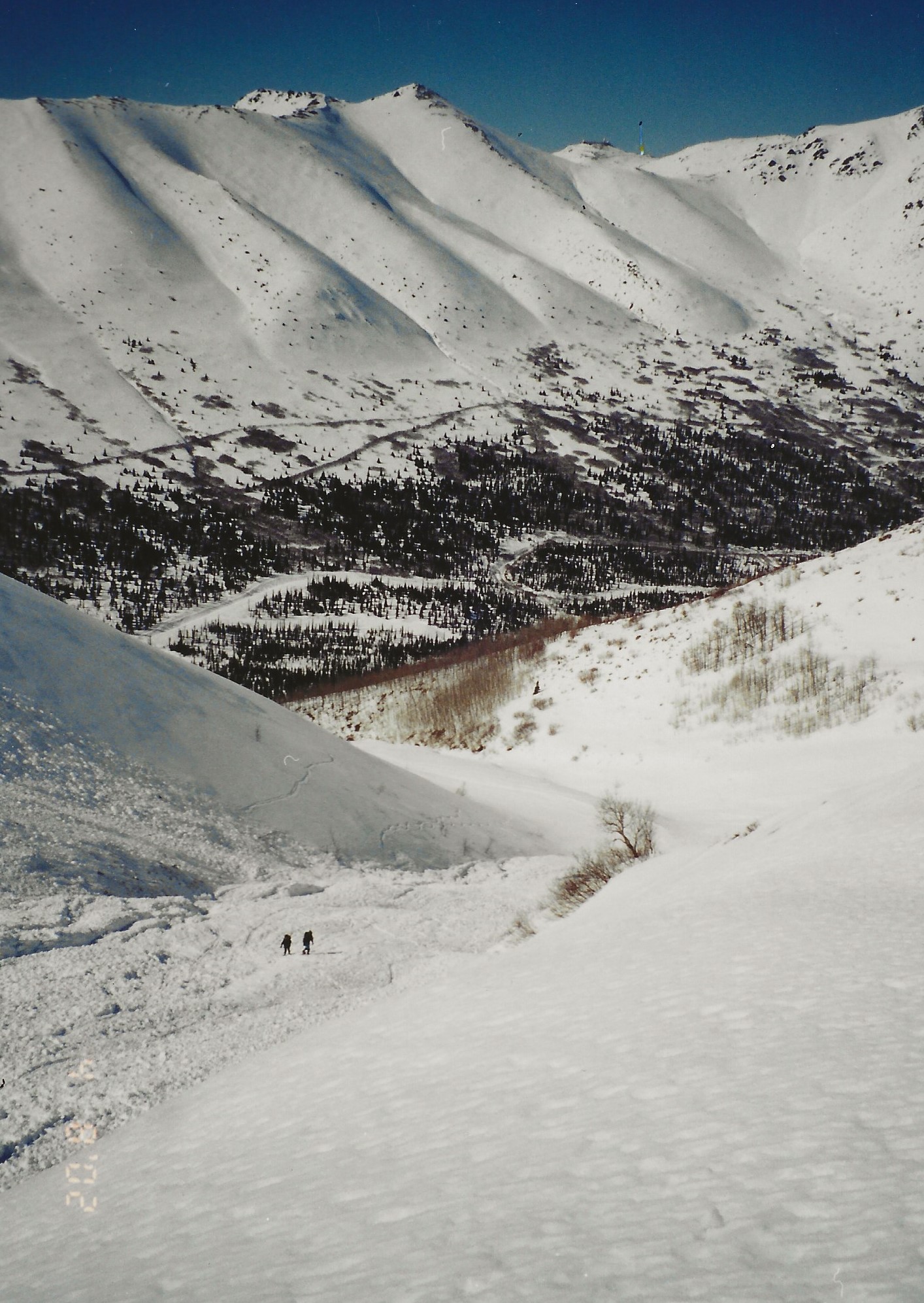 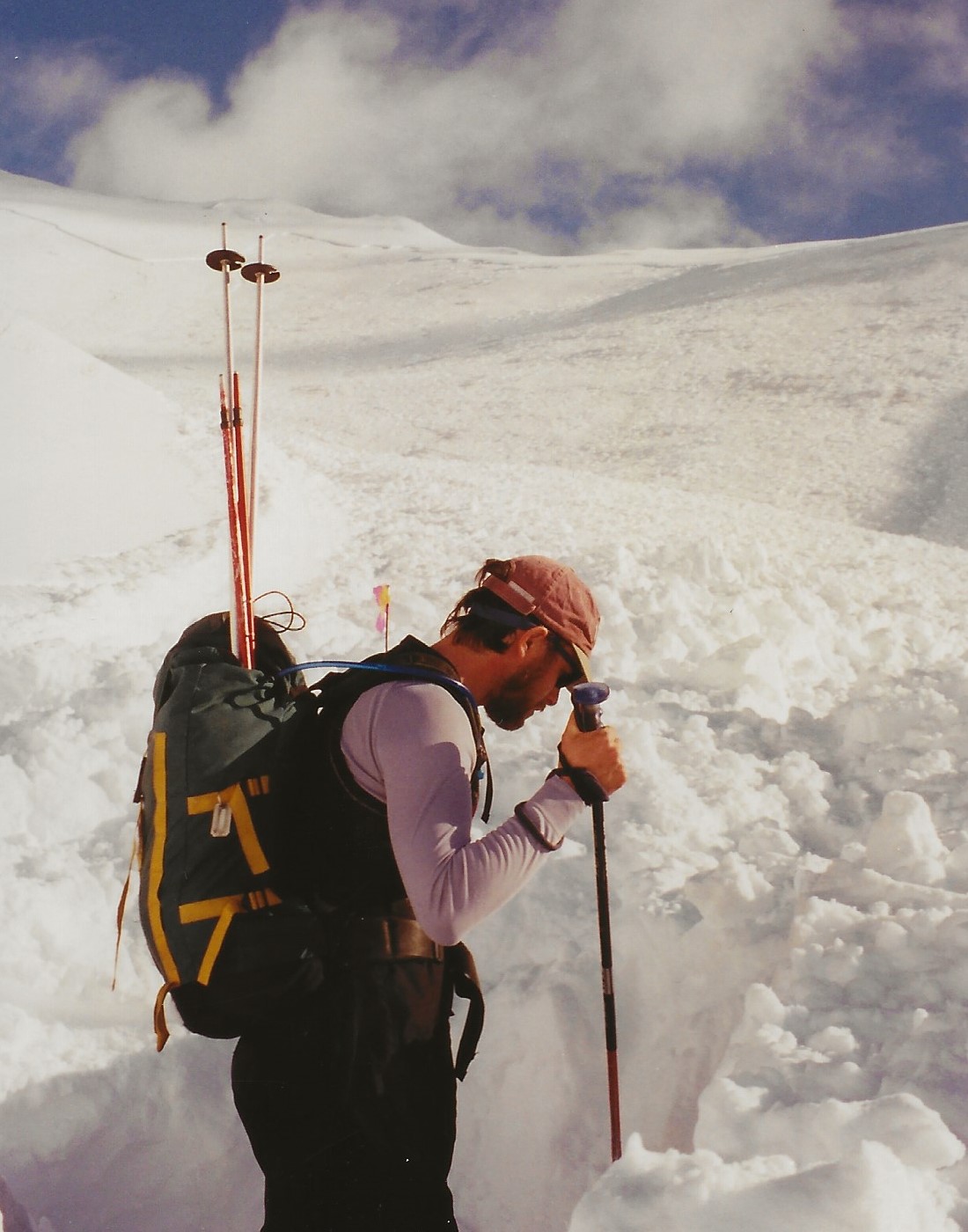