The four skiers apparently lost in an avalanche in Taylor Creek Canyon Saturday – and the one man who survived – shared several years skiing and climbing experience.

Missing in the avalanche are Charles Kibler, Ellen DuFresne, Paul Pollack and Alan Worland. Charles Head is the only apparent survivor of the 11 a.m. slide.

Alaska State Troopers announced today that the search for the missing skiers has been called off until weather and conditions in the area improve.

Kibler, 28, a lifelong Alaskan who was trip leader for the Mountaineering Club of Alaska outing, had been involved in climbing and skiing since he was a child, Dona Agosti said.

Ms. Agosti, who is active in the mountaineering group, said Kibler joined the club in 1968 and served most recently as trip coordinator.

Kibler was born in Anchorage Feb. 9, 1949 and was a 1967 graduate .of West Anchorage High School. He then went to Rose Polytechnic Institute, where he received a bachelor of science degree in civil engineering in 1972.

From there Kibler returned to Anchorage and began work in June 1972 with the state Highway Department, now known as the Department of Transportation. After completing a more than two year training program, he was permanently assigned to the construction section, where he most recently worked as assistant project engineer.

Fellow employee Frank Koffmann said Kibler was known to be active in hang-gliding and flying, as well as being an avid cross-country skier. “His co-workers considered him to be technically brilliant,” Hoffman said.

He lived with his mother, Frances Kibler, at 4158 Hood Court.

As trip coordinator with the club Kibler was in charge of scheduling outings and finding leaders familiar with each planned event, Terry Becker of Alaskan Mountaineering and Hiking Co. said.

Becker, also a member of the club, said the organization works mainly as a trip broker, rather than the more traditional sponsor.

He said members would tell Kibler where they would like to ski, hike or climb and he would set up a date for the outing. The outings were scheduled far in advance and published in the monthly club newsletter, the “Scree.”

Trip leaders, such as Kibler, are not structured leaders in the traditional sense, Becker said. “It’s kind of an individual thing,” he said.

The group for Saturday’s outing met at the Fred Meyer parking lot at 7 a.m. and all piled into Worland’s vehicle for the scheduled outing to Tincan Mountain. They disembarked near Turnagain Pass and began the skiing trip off the Seward Highway. Less than three hours later the group was caught in the avalanche about six miles off the highway.
Head, the only survivor, said this morning he began rock climbing about five years ago, then added cross-country skiing to his activities when he came to Alaska about two years ago from Cleveland, Ga.

Head said he drove a car from Georgia to Fairbanks for a friend who worked on the Trans-Alaska pipeline, then came down to Anchorage to work for Mr. and Mrs. James Vandiver, friends from Georgia.

Head’s work as a stonemason for the Vandivers apparently helped him stay in good physical condition – and just may have saved his life Saturday as he made the grueling trip back to the highway without benefit of skis or warm clothing. All that was lost when the force of the avalanche ripped his pack off his back and his skis off his feet.
Head’s survival indicated to Becker that the 23-year-old man’s “number just wasn’t up. He’s a very lucky person.”

Miss DuFresne who taught junior high mathematics at Chugiak High School joined the club last year, but
had been active in skiing and hiking long before that, Ms. Agosti said.

“Ellen was petite, but she had lots of stamina and was a very delightful person,” Ms. Agosti said.

Miss DuFresne was in her third year of teaching after moving to Alaska from Michigan, where her family still resides.

Worland, a West Point graduate, moved back to Anchorage within the past few weeks, Ms. Agosti said. He joined the mountaineering club in 1974 when he was stationed as a lieutenant at Fort Richardson, she said.

He then was transferred to Fort Greely, where he remained until he was discharged from the service late last month, she said.

“He came back here, got a job at Fort Richardson and an apartment on San Roberto Street,” she said. “He was really happy to be back here.”

His parents, Mr. and Mrs. J.C. Worland, three sisters and one brother reside in Mattoon, Ill., she said.

Pollack, the most recent Alaskan, was also the oldest member of the group at 38.

Kaye Raue, a close friend of the missing man, said Pollack came to the United States from Czechoslovakia in the mid-1960s. He received a master’s degree in librarianship from the University of Denver, then worked in California as a librarian for a while, Miss Raue said.

He then returned to Denver and began law school at the university in 1976.

Pollack, Miss Raue and three other law students came to Alaska as part of a program developed between the university and the Alaska Federation of Natives.

The students were placed in local law firms, she said, where they worked on native affairs as a first priority. Otherwise they performed the normal duties of law clerks. Pollack worked for Hugh Fleischer since his arrival Jan. 2.

Miss Raue said he had written the mountaineering club prior to his arrival in Alaska and attended a club meeting last Wednesday. 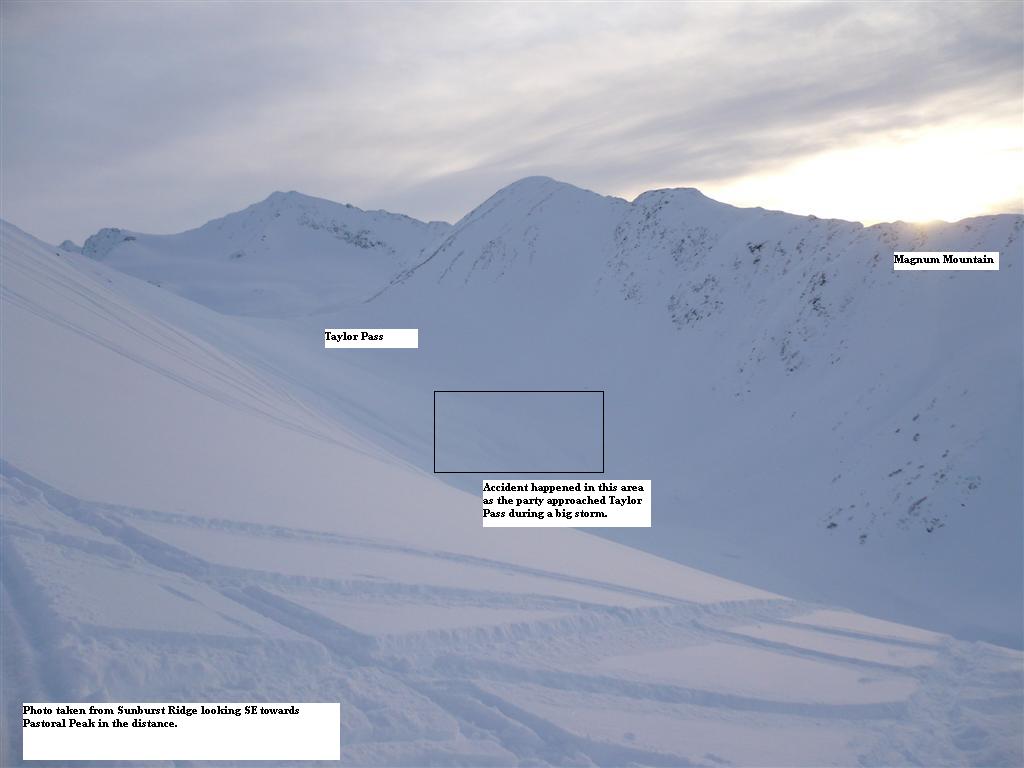 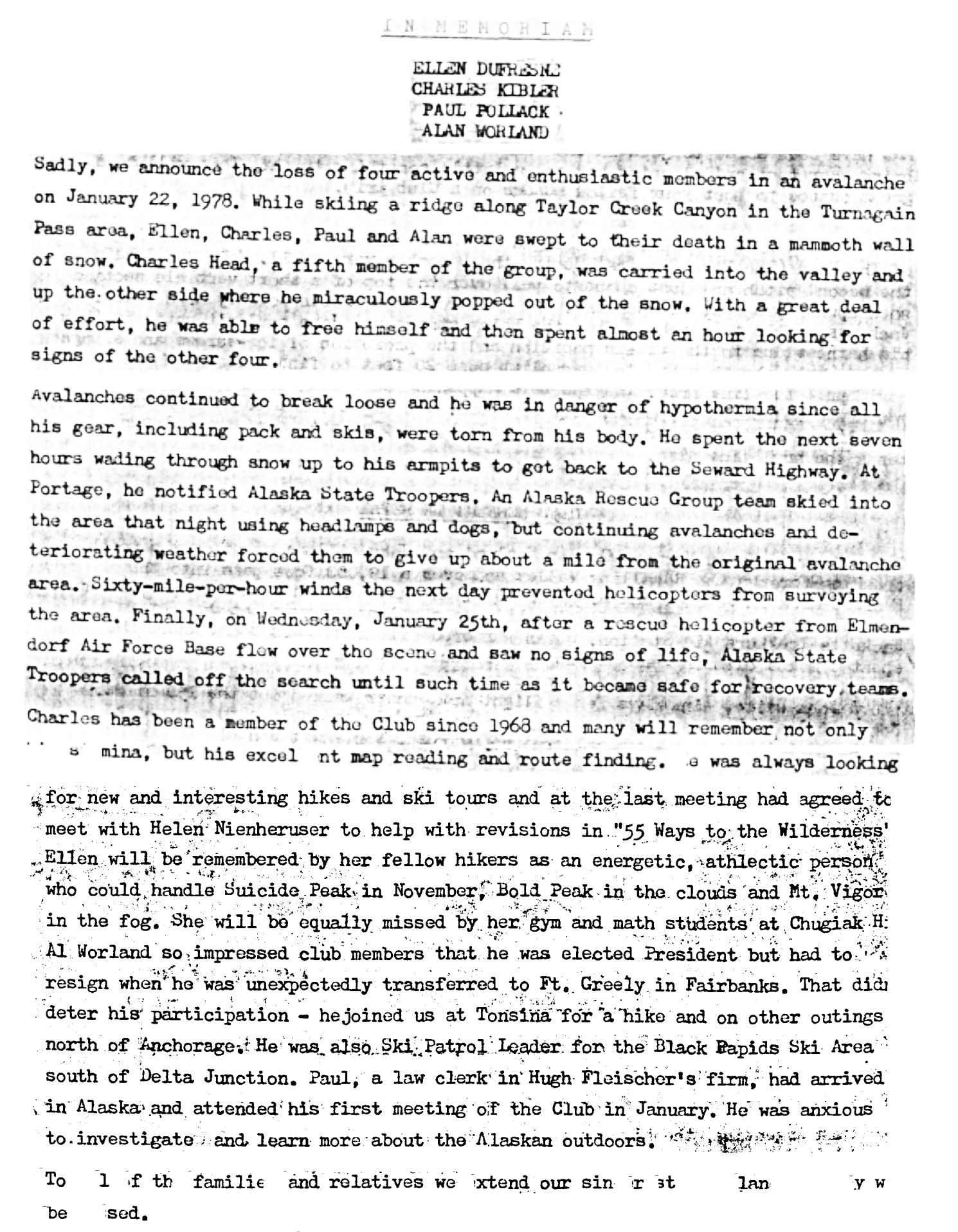