On Feb 23 2008, eight skiers met at Turnagain Pass with the intention of skiing lower angle tree runs on Tincan. All of the skiers in the party read the avalanche advisory that morning and knew the danger was considerable. They noticed recent avalanche activity on their way to the Pass. It was the first sunny day after a 12 day storm that deposited 7 feet snow and 10 inches SWE accompanied by gale to storm force winds. The party noticed other folks skiing and riding steep lines above treeline and decided to drive to the Sunburst pullout and check out that mountain. Here they also saw numerous ski tracks and no avalanche activity, so they decided to skin up Sunburst. All of the skiers except one (IW) were familiar with the area and had skied there before. They skinned up the main ridge approximately 3000 feet just past two sets of ski tracks and dug a pit at the top of the run they intended to ski. There were no tracks yet on this run or further up valley. They noticed no other signs of instability like shooting cracks or whumphing during their climb. The snowpit was located on a SW aspect at about 3700 feet. They dug down 5 feet and got no fractures (CTNx2) during their shovel compression tests.

The first skier to descend went between the snowpit and a rock outcrop located 75 feet below and to the skier’s left. The second, third, fourth, and fifth skiers descended one at a time between the rock outcrop and a rocky rib to the skier’s left of the first track. The sixth skier (IW) made approx. four turns and skied off the rock outcrop. IW most likely triggered the avalanche when he landed below the rock. IW was skiing fast and was in the middle of a large slab when it fractured. The seventh and eighth members of the party were still on the ridge on top of Sunburst while the first five skiers were located at the bottom slightly down valley of IW’s fall line. After the slab began to descend to the lower party’s location, all five skiers had to quickly ski to get out of the way. SM was blown over by the powder blast and partially buried. He was able to dig himself out uninjured. IW was able to stay upright and on top of the moving slab for 1500 feet all the way to the bottom until the transition zone/gulley at the bottom of the valley. The debris traveled across the gully and 100 feet up the NE face of Magnum before coming to a rest. This avalanche triggered a sympathetic avalanche on the NE face of Magnum that was approx. 50 feet wide with a crown face 10-12 feet deep. IW was buried past the gully on the Magnum side of the drainage between Sunburst and Magnum. He was using skis with Fritschi AT bindings, and when he was uncovered, rescuers discovered one ski had popped off during the avalanche.

The party of the victim (IW) estimated the avalanche occurred at 1420. PK, SP, GN, SM, MB, and SB began organizing a search immediately following the avalanche. 5 skiers in the party had to scramble out of the path of the avalanche, and one of them (SM), was knocked over by the powder blast but was able to dig himself out. This lower party began a beacon search. There were two members of the party still on top of the ridge (MB and SB), who began a safe descent on the bed surface to join the lower search party. CH skied to the road to report avalanche to Alaska State Troopers. There were over 20 people on Sunburst and Magnum that day and people began responding to the original search party to help with the rescue. This large response of people caused some confusion for the victim’s party because some of the new rescuers showed up on scene with their beacons in transmit mode. This gave the victim’s search party false beacon signals and difficulty managing resources. This large group of rescuers began searching the first part of the debris pile which was still in the track of the avalanche on the south-western aspect of Sunburst.

At the time of the avalanche, a separate group of four skiers was skinning up the lower ramp about 1/4 mile away from the avalanche on the western aspect of Sunburst at about 2000 feet. One member of this group saw part of the powder blast in the air after the avalanche ran over to the north side of the adjacent mountain to the south named Magnum. Two skiers from this group decided to continue to skin up the valley towards the avalanche in case people were caught. This group noted 11 skiers on Sunburst Ridge while they were hiking up from the parking lot; so, they figured at least one person was buried. It took approximately 8-10 minutes for these two skiers to hike up to the debris pile. Upon arrival these two rescuers switched their beacons to receive and yelled up hill to the victim’s search party asking, “How many buried and last point seen.” These two separate rescuers began beacon searching a gully underneath the last point seen while the original search party continued working down the upper part of the debris pile. Within about 5 minutes, another group of separate rescuers showed up to help these other two lower rescuers. At this time the first two acquired a beacon signal. One of the searchers was able to track a flux line into a pinpoint search and began instructing other rescuers to get their probes and shovels ready. After drawing a box in the snow during the pinpoint search, another rescuer began probing. Within 2-3 attempts, the probe struck the buried victim about 3-4 feet deep. Rescuers began shoveling immediately.

Shovelers dug in shifts and switched out as they got tired. Within about 5 minutes, the buried victim’s backpack was uncovered, and a couple rescuers began using their hands to dig towards his face. IW was face down in the snow and the back of his ears and neck looked blue and waxy. It was determined that his airway was an immediate life threat; so, the rescuers disregarded spinal precautions in order to pull the victim’s upper body out of the snow. This was a difficult process, since most of his body was still incased in concrete snow. As a couple rescuers continued digging, another couple of rescuers grabbed IW’s backpack and forcefully pulled his upper body out of the snow. There was just enough room to expose his face, which looked blue and waxy. One of the rescuers immediately checked the airway. IW’s mouth was open and clear of snow with drool dripping out. At this time, the rescuers were only able to lift his face a couple inches above the snow; so, there was not enough space for rescue breaths. At this same time, CA of ASARD arrived on scene via AST Helicopter. He was with the first helicopter load of dog teams and AMRG rescuers, and took command of the scene. When he contacted the rescuers in the hole, they informed him that IW was unresponsive and not breathing. The rescuers continued holding IW by his backpack to keep his face out of the snow, while they continued to dig under his face to clear enough room for rescue breaths. CA recalls 2-3 minutes before the rescuers called out that IW was breathing on his own.

At this point, the ABC’s were secure; so, the rescuers went back into spinal precautions and performed a rapid trauma survey. IW was responsive to pain, his skin color began to turn pink, and no severe bleeding or immediate life threats were found. Within another 5 minutes, IW’s eyes opened up. They were both equal and reactive to light. Soon afterwards, IW began answering questions appropriately. His chief complaint at this time was that he was cold and uncomfortable. IW was then loaded on the AST Helicopter and flown to an ambulance waiting for him in the Western Turnagain Pass parking lot. 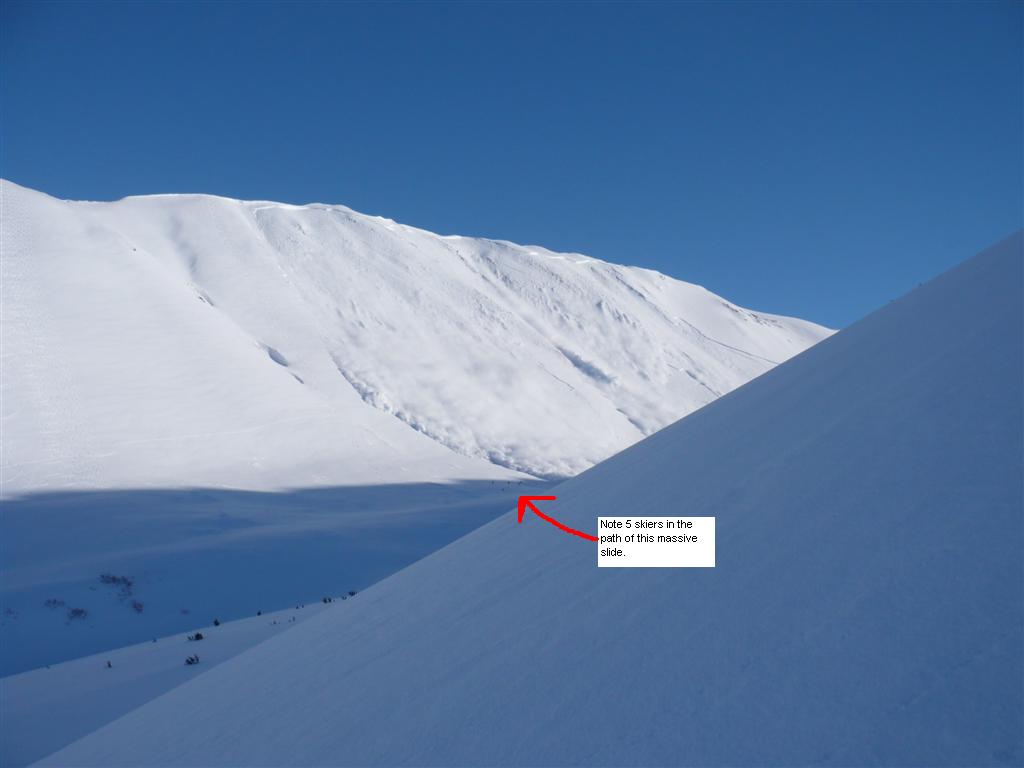 Shortly after the slide was triggered. Photo taken from NW ridge of Magnum by S. Repetto. 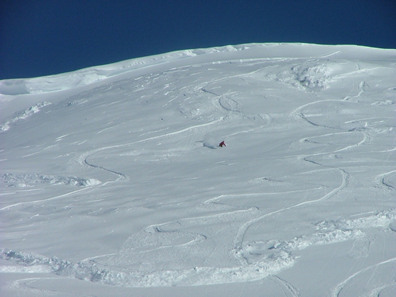 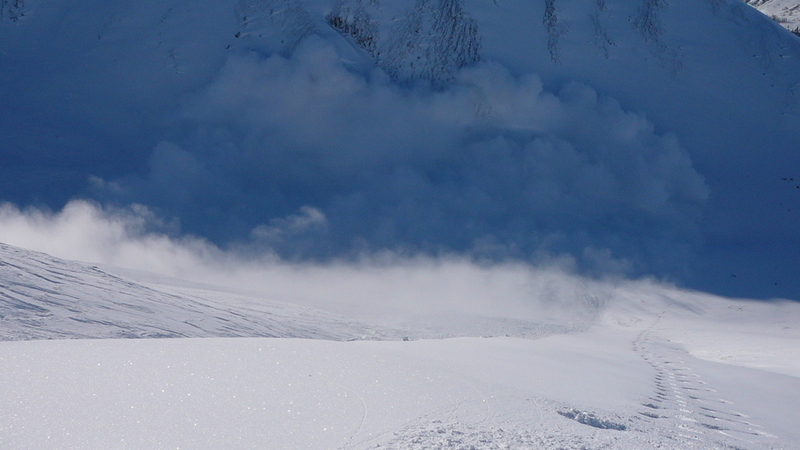 Photo by Mark McKinney taken looking down from Sunburst ridge with the powder cloud crossing the valley slamming Magnum Mtn. 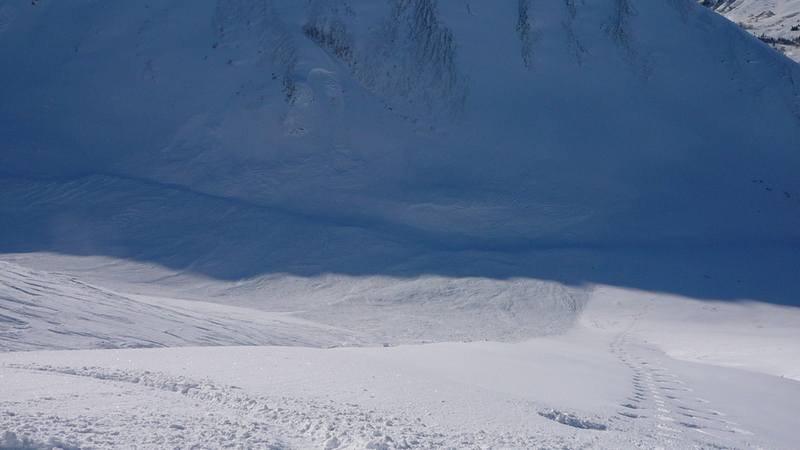 Another Mark McKinney photo taken looking down from Sunburst after the dust settles, note release on Magnum Mtn. 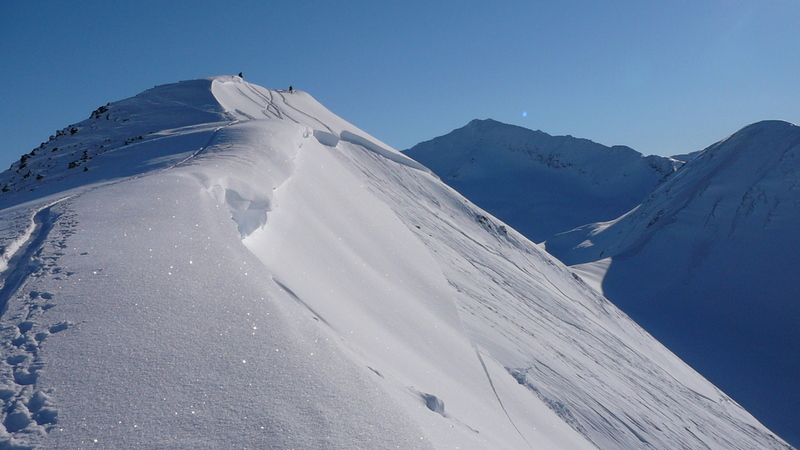 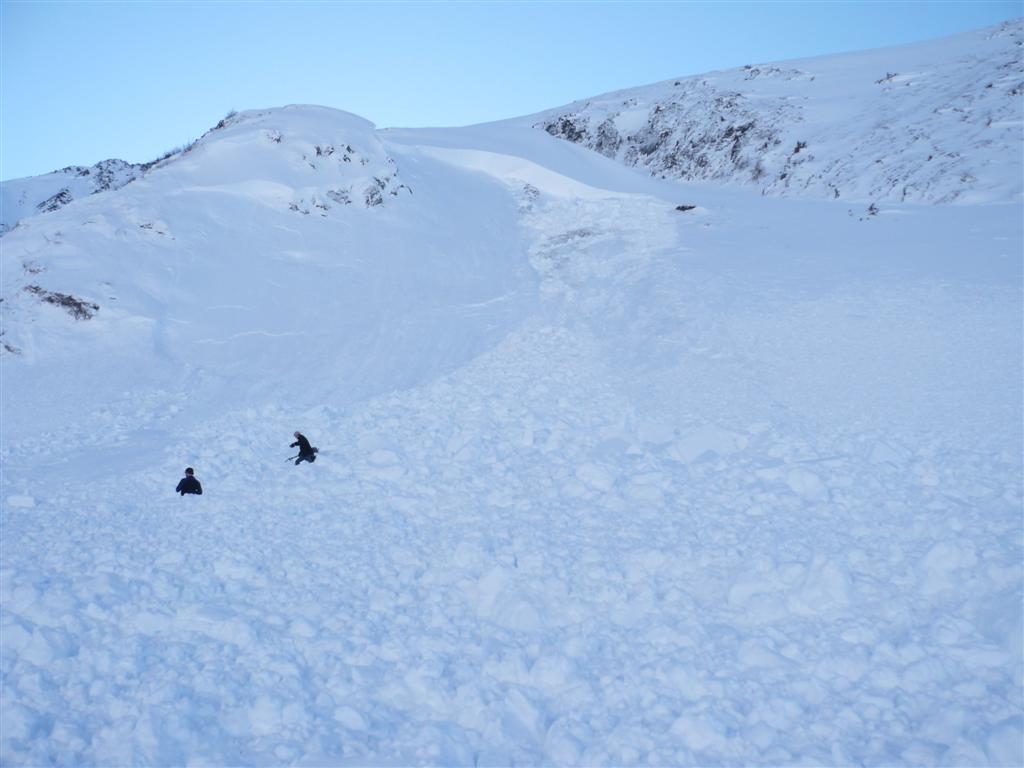 Searchers had to search all the way to Taylor pass for possible victims. Note sympathtic release above searchers. Photo S. Repetto. 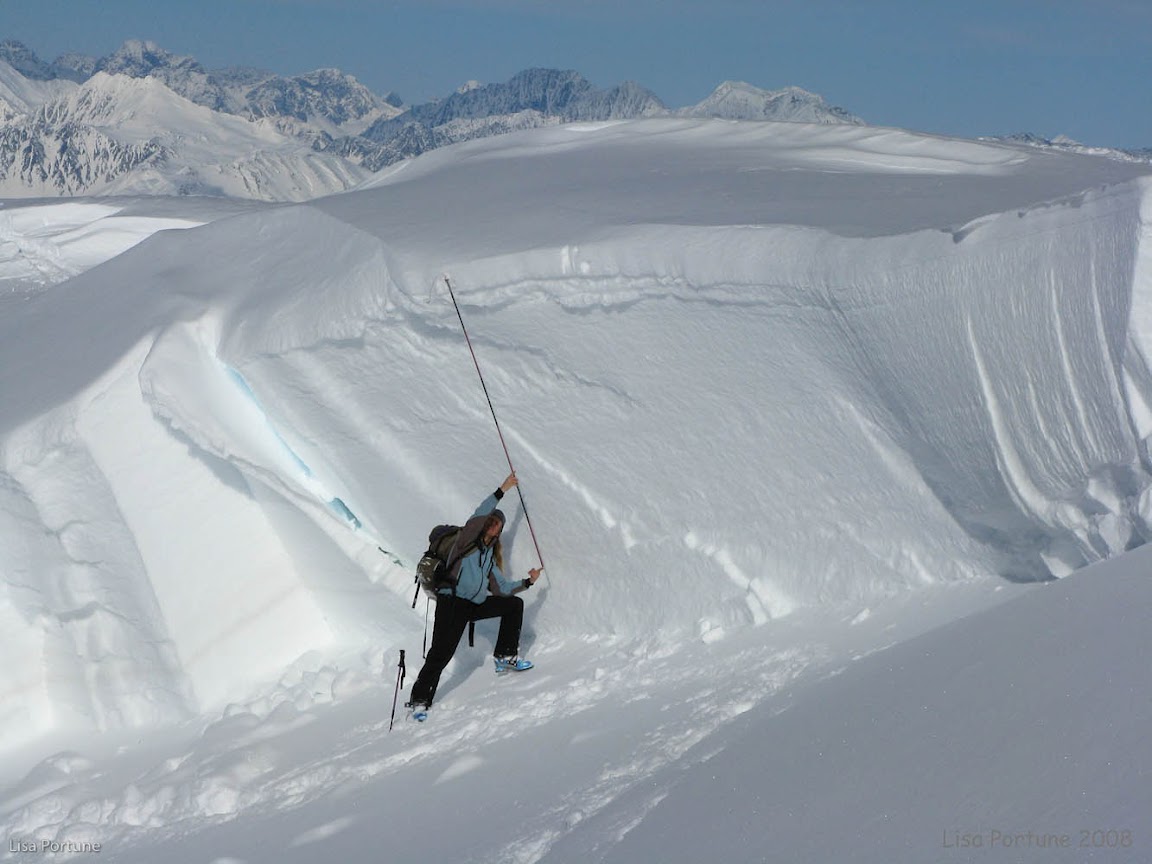 The largest part of the crown. L. Portune photo.