The avalanche consisted of slab material, pencil hard, with a maximum thickness of 24in. Elevation at the crown was 3850ft. The start zone was, corniced concave and planer. Total distance traveled from the crown to the toe of the deposition was 3170ft, with a run out angle of 25 degrees. Distance from start zone down slope of the buried victim was estimated at 2000ft, at an elevation of 2780ft. On 2/14 a ski pole was found 935ft above the burial site. Start zone slope angles varied from 35-38 degrees. The slope aspect was N-NW, leeward, loaded, and void of any anchoring. The ground and bed surface consisted of winds slab, and alpine tundra, rock outcroppings, moss and sparse bushes. The deepest of the deposition area was not at the toe of the debris. Depositions of over 8ft were recorded above the burial site due to creek and terrain features.

Weather on the day of the avalanche was “Blue bird” with temperatures in the mid 30’s, light wind from the south. A weekend storm on Feb. 6-7 deposited 16″ of fresh snow in the area. Temps rose from 7-30 degrees f during storm and have remained mild since. Feb 7-8 winds above 3000′ transported snow in plumes with wind from the south in excess of 50 mph. Feb 12th <1″ of light snow accumulated. Total overall snow pack has been below normal, with long cold, clear weather between storms.

Predominate winds in the valley are from the south. Top and side loading situations are always present. The overall characteristics of the snow pack are as follows: Pencil hard wind slab of varying thickness, with intermediate facets 20cm from the bottom, and depth hoar at the base of the snowpack. Numerous test were performed at the crown and right flank with the following results: CT6 Q1 with failure at the depth hoar layer. CTV Q1- failure during block isolation at the intermediate facet layer. These tests were consistent with observations of “bulls eye” clues.

Events Leading to the Avalanche

Information gathered, was was done so during the recovery effort and the day following. A witness interview provided the following details: Two local residents of the South Fork valley were skiing in an area known as Three Bowls. The area is accessed though private property, then state park land. The approach is along a creek bed, which is fed by three major bowls. The two skiers, Skier 2 and Skier 1, both from Eagle River, had skied Three Bowls earlier in the season. The first run of the day was without incident, with the approach track following the creek and switch backing to the top. It was at about 4pm. when Skier 1 did a solo run without his ski partner. She remained directly below, at the the creek, high on the northern most bank. As Skier 1 climbed, Skier 2 watched from nearly 1000 vertical feet below. When he and the groups dog, entered the slope from above, she saw the avalanche engulf the skier high on the slope. A sympathetic release of the adjacent slope was seen, as the avalanche traveled down slope and into the creek bed. Skier 2 was nearly hit by the powder blast and material, as it traveled the distance. in the creek. Neither skier was wearing an avalanche transceiver, or had any other rescue gear. Skier 2 immediately went for help.

A notorious and persistent weak layer of depth hoar, combined with a 16in snowfall and wind slab provided the unstable snow structure. Neither skier observed any “bulls eye” clues to instability, as their uptrack route was different than their decent route.. The avalanche was observed to have propagated above the skier and into the adjacent bowl, which is indicative of stored energy and unpredictability in the wind slab. Neither skier had avalanche rescue gear and it’s unknown and speculative whether an immediate, companion rescue would have made a differance in the outcome. Both had skied in the Three Bowls area before, which may have lulled them into a false sense of security on the day of accident. The weather was warm with blue skies and sun and neither traveler was thinking avalanche. The terrain at the accident site is very unforgiving, with high consequence deep burials inevitable. As with the vast majority of avalanche accidents, human factors played a major role in the event, as described above.

The accident was witnessed by local residents in the South Fork valley at 4:10pm. The two residents traveled to the accident site to look for survivors, as they had witnessed a lone skier and a dog trigger the slide high on the slope. The distance to the burial is about 3/4 of a mile from Hiland Rd. Once on the avalanche debris, one of the rescuers noticed a hand sticking up out of the snow. They removed snow from the face and chest, and observed the victim to be unresponsive. 911 calls alerted local fire fighter crews from Chugiak and Eagle River. Anchorage police as well as the Alaska State Troopers were alerted and volunteer rescue resources were called in. Kip Melling, a South Fork resident was notified by a neighbor of the EMS activity at the area of Three Bowls. Melling, an avalanche professional with the Alaska Avalanche School, arrived on site at 4:50pm. After interfacing with the IC, it was deemed necessary to assess the route to the accident site and verify scene safety. He and a medical professional from the Alaska Mountain Rescue Group proceeded to the site at 5:30pm. They met the two residents that found the victim. They shared details of the accident site and victim. Melling and the AMRG rescuer, arrived on site at 6:20pm. The site was accessible by foot, and posed no immediate avalanche danger for rescuers. At 6:25pm. Skier 1 was verified deceased. Additional resources from the AMRG arrived on site at 6:40pm. to sled haul the victim out to awaiting EMS on Hiland Rd. The recovery team arrived at the nearest residence on Hiland Rd. by head lamp at 7:30pm. The dog was reunited later that evening.

Position of the victim was as follows: Head down slope, face up, with arms above head. Backpack was attached with shoulder straps and waist belt. Both skis had released, and poles were not attached to hands. Visible signs of trauma with a broken left shoulder/arm and deformity at the top of the right boot. There were no signs of a “snow plug” in the mouth or nose or ice lens around face. All clothing, including gloves were still attached.
Photos 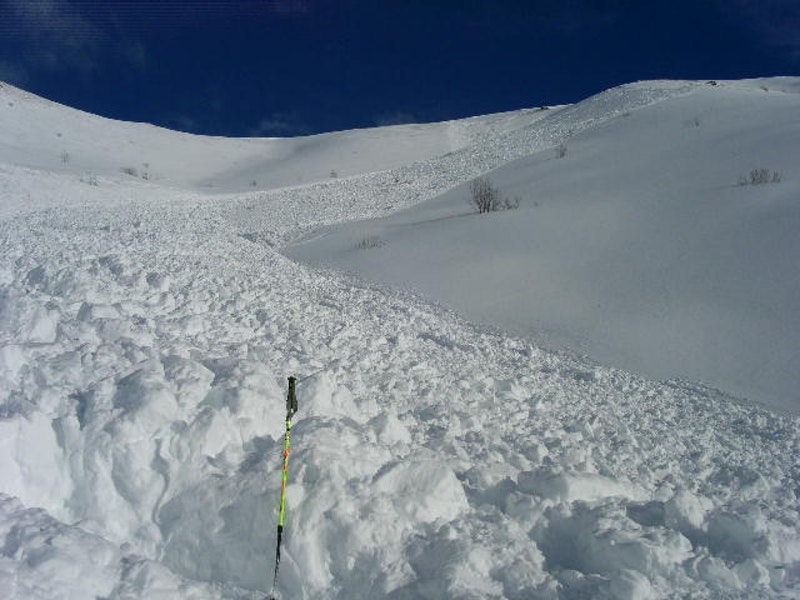 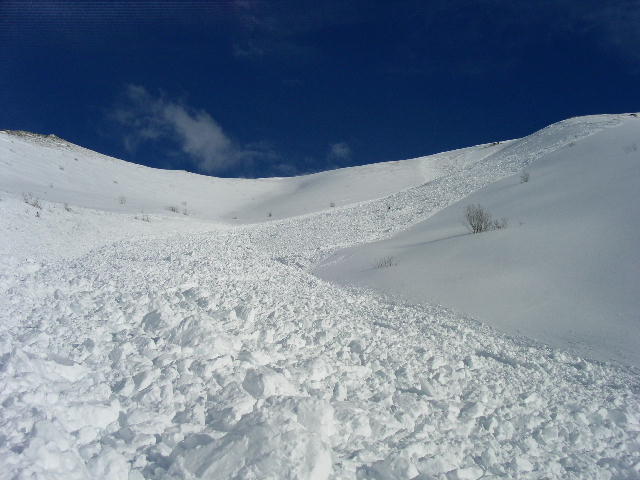 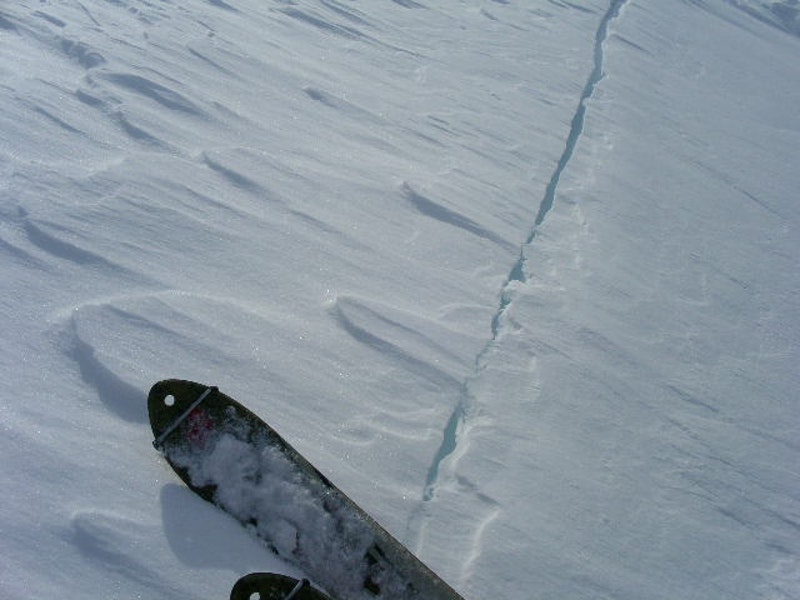 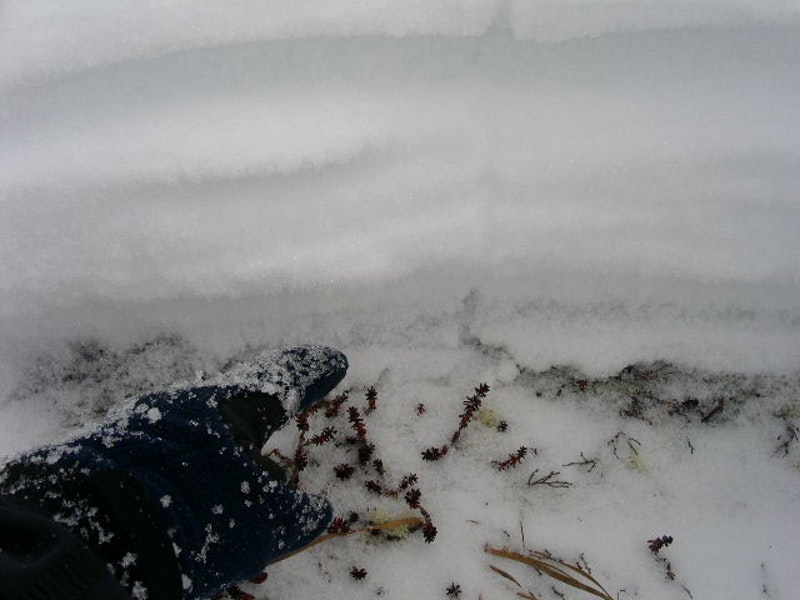