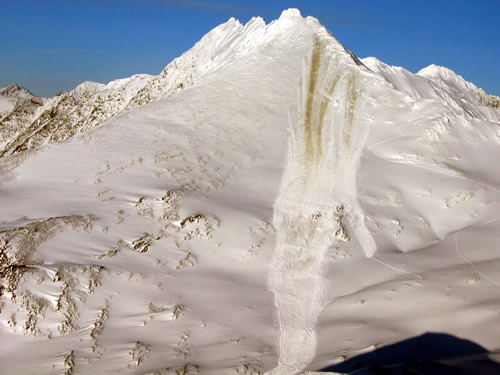 Preliminary Incident Narrative:
An experienced and knowledgeable party of two skiers hiked up a northern ridge to ski the southeast aspect on the summit cone of Raggedtop Mountain (elev. ~5200 ft.). Raggedtop is in Girdwood Valley on the Chugach National Forest and is not connected with Alyeska Resort; however, this mountain is visible from the ski area. Alyeska Ski Patrol witnessed the avalanche from across Girdwood Valley and initiated the rescue response.

The two skiers departed Crow Creek Road at 0915. They did not see any other groups in the area that day. Both had skied Raggedtop in previous years and were familiar with the area. They ascended the standard route along a northern ridge reaching a small knoll. This knoll drops down to a basin underneath the final ~1800 foot climb to the summit. They skied a few turns down the short northwest face of this knoll, then continued their ascent up the lookers right of the southeast face the Raggedtop summit cone. The skiers ascended using several low angle ramps consciously avoiding rock outcrops. They discussed the general snow stability, and recognized the potential for a colder and possibly weaker snowpack at this location and elevation. Observing no signs of instability during their ascent, the skiers gained the final ridge, and followed it to the notch just below the summit. The decided this notch would be a good starting point for ski descent. Before heading down, they decided to bag the final pitch to the true summit which is a heavily rimed knob. Both removed their skis and continued the short climb to the peak.

They climbed back down to the notch and discussed: their descent, escape routes, and safe spots. Skier #1 first considered a safe spot off to skiers left just above a small gully about 2/3 of the way down. Upon re-evaluatation, he decided on a spot further down to the skiers left on a low angle ramp. Skier #1 explained his plan to skier #2 and began skiing from the notch shortly before 1330. He descended along the fall line, then angled a bit to the skiers left to descended past a small rock outcrop near the bottom of his run. Skier #1 then pulled over to the safe spot to watch his partner. Skier #2 began skiing and triggered the avalanche in his first couple turns approximately 100 ft. below the notch near some rocks. Skier #1 could see his partner for about 2 seconds before he disappeared, but soon lost sight of the debris as it continued below his safe spot. The debris split in two: a large pile, and a smaller pile closer to the position of skier #1.

After the slide stopped: skier #1 put his skins back on his skis, turned his avalanche beacon to receive, and started his search by zigzagging up the closest toe of debris. He quickly continued up to the rock outcrop that split the debris, and then began zigzagging down the larger debris field with skis and skins still on. He received a signal near the toe of this debris field, probed, and dug to the victim. Skier #1 estimated the elapsed time at 20 minutes. The victim’s head was approximately 4-5 feet under the snow and his feet 7-8 feet under. The burial location was approximately 3500 feet elevation. He uncovered the victim’s upper body and performed CPR with no results. Skier #1 used the victim’s cell phone to call Alyeska Resort Ski Patrol. Skier #1 then continued CPR until the helicopter arrived at 1448.

Rescue Summary
At approximately 1330, an Alyeska Resort Ski Patroller looking through binoculars across the valley witnessed skier #2 trigger the large avalanche near some rocks at about 5200 feet. At 1335, Alyeska Ski Patrol sounded the alarm and contacted: AK State Troopers, DOT, and USFS.

AK State Troopers requested Alyeska Resort Ski Patrol and Chugach Powder Guides put together a hasty team. The rescue party arrived at the Girdwood airstrip by 1406. Two USFS Avalanche Technicians were alerted by 1340, and arrived at the airstrip at 1415 to standby if additional help was needed. A helicopter arrived, loaded, and delivered first team of patrollers and one CPG helicopter ski guide on scene of avalanche at 1448. One survivor and one victim were determined upon arrival. The victim displayed signs incompatible with life. Skier #1 was flown down at 1520. By 1544, all rescuers and victims were back at the Girdwood airstrip.

Joel Schihl, 30, died when a sheet of snow 100 feet across collapsed under his skis, tumbling him 1,600 feet down Raggedtop Mountain and burying him in 5 feet of snow. Friend Bradley Cosgrove, 28, was able to avoid getting trapped and was not injured, troopers said.

They were apparently the only ones on the steep mountain at the time. Raggedtop is in the Chugach National Forest, about four miles north of Girdwood.

Across Girdwood Valley, Cosgrove’s girlfriend, who works with the Alyeska Ski Patrol, watched as the avalanche came down and called for help, troopers said. They did not identify her.

Schihl and Cosgrove drove to the area Tuesday morning and parked near Crow Creek Mine, northeast of Girdwood. Family and friends said both men were experienced mountaineers and skiers, sensitive to avalanche hazards.

The pair climbed to the top of the 5,200-foot mountain using all-terrain gear. After Cosgrove skied about a third of the way down the mountain, Schihl began to descend. He was just two ski turns down from the top when he triggered the avalanche at about 1:30 p.m., said Carl Skustad, director of the Chugach National Forest Avalanche Information Center.

“You can’t have 3-D vision and look inside the snowpack. It’s just very unfortunate,” Skustad said. “They didn’t ski in the exact same spot and the second skier happened to hit a weakness in the snowpack.”

Cosgrove was able to locate the buried Schihl, using an emergency beacon, but he was already dead. Authorities did not immediately know if he died of suffocation or the trauma of the fall.

A helicopter was launched from Anchorage and made it to the mountain about 3 p.m., said Chris Owens, owner of Chugach Powder Guides, a heli-ski service that helped with the rescue.

“It’s tragic,” Owens said. “It’s always horrible when nature gets the best of you.”

A relative, Vasilios Gialopsos, said Schihl was an extreme skier who loved the outdoors, taking every opportunity to go explore and play in the mountains. He lived near Jewel Lake and was a waiter at Little Italy in South Anchorage.

Schihl came up to Alaska from Virginia for the outdoors experiences here, Gialopsos said. Just a few weeks ago, Schihl and his new wife found out she was pregnant, he said.

“He and (his wife) were such a happy couple, life couldn’t have been much better for them,” he said. “They had a wonderful lifestyle.”

“It’s a double-edged sword that we live here,” Gialopsos said. “The same elements that took Joel are the same reason he came here.”

Raggedtop is popular among backcountry skiers, although few climb all the way to the top, Skustad said. Most ski down from just above halfway, or around 3,000 feet. He said this early in the season he wouldn’t be surprised if the pair were the first ones at the top.

Skustad said the snow above 3,000 feet is tricky. “It’s very cold, shallow, weak and unstable snow up there.”

Trooper Jeff Evanoff said the avalanche left a clear pockmark on the mountain, visible from his office near the turnoff to Girdwood on the Seward Highway.

“It’s the real world out there,” Owens said. “The mountains, open water, white water, the desert — whatever it is, Mother Nature can take your life.”

Megan Holland can be reached at mrholland@adn.com. Daily News reporter Craig Medred contributed to this story.

A skier was killed Tuesday afternoon by an avalanche that plunged him down a mountain near Girdwood, about 35 miles south of Anchorage.

Joel Schihl, 30, of Anchorage was found dead, buried under at least four feet of snow at Raggedtop Mountain, about a mile from the Crow Creek trail head. The mountain is a common destination for backcountry skiers, rescuers said.

Schihl had been skiing with another man, 28-year-old Bradley Cosgrove of Bird, when the two were caught in the 100-foot-wide avalanche that fell about 2,000 feet, Alaska State Troopers said.

“That’s a massive amount of snow,” troopers spokesman Greg Wilkinson said. “It’s like having concrete fall on you.”

Members of the adjacent Alyeska Resort ski patrol witnessed the avalanche through binoculars shortly after 1:30 p.m. while conducting a routine scan of the area from a patrol station on Mount Alyeska, said resort spokesman Todd Clarke. The ski patrol then contacted troopers.

“Basically, they watched across the Girdwood valley as the avalanche came down,” Clarke said. “It’s part of their snow safety work to constantly watch our terrain and the surrounding terrain.”

Cosgrove managed to free himself and activated an emergency beacon. He found Schihl’s body soon after rescuers arrived in a helicopter.

Rescuers were able to reach the backcountry area about two hours after the avalanche was reported, Wilkinson said.

Cosgrove was taken to his vehicle and released.

Members of the ski patrol and guides with Chugach Powder Guides, a local heli-skiing company, assisted in the search effort.

Chris Owens, owner of the company, said he knew Schihl socially but had never skied with him. Schihl was known as a regular backcountry skier, however, he said.

Raggedtop Mountain is steep but not particularly treacherous, according to Owens. He said the avalanche could have been triggered by the skiers, but stressed it was too early to say exactly what caused it.

“Any snow can turn into an avalanche if the conditions are right. There are a thousand variations,” Owens said. “The X-factor can get you — and you’ve got a tragic set of circumstances.”