Sunday, March 31, was a warm and sunny day in the Anchorage area. Rangers at Chugach State Park, east of Anchorage, were nervous that the snowpack was thawing and weakening, and therefore could pose an avalanche danger to park visitors.

Mt. Magnificent is a 4,271-foot peak in Chugach State Park. The peak is situated five miles east of the community of Eagle River, which is essentially a suburb of Anchorage.

March 31 was Easter Sunday. That morning, under cloudless skies, Bill Crouse (44), his stepson, Don Zimmerman (26), and Doc Crouse, Bill Crouse’s brother, were snowshoeing above timberline on a flank of Mt. Magnificent. They had two dogs with them. The group had followed the switchbacks to the road’s end, and from there, they proceeded to snowshoe—breaking trail through deep snow—on a trail that winds into a bowl on the mountainside. At about 10:00, they were about halfway across the snowy amphitheater, traveling in a line, when they collapsed a buried weak layer of depth hoar, which triggered an avalanche that released above them. Everyone was caught, and when the avalanche stopped, only Doc Crouse was on the surface. He could see no sign of Bill Crouse, Don Zimmerman, or the dogs.

Doc dug himself out from about a foot of debris and made a surface search, which yielded nothing. He then walked out to the family’s home to report the avalanche.

The Alaska State Troopers got the emergency call at 12:45. Fifty rescuers responded, including troopers, firefighters, Chugach State Park rangers, and Doug Fesler and Jill Fredston of the Alaska Mountain Safety Center. A trooper helicopter ferried Fesler and Fredston in to assess the danger before allowing rescuers to access the site. The area of debris was large—Fesler estimated it was the size of three football fields. Once the decision was made that rescuers could safely enter the area, many had trouble getting there, especially those on snowmobiles, which bogged down in the wet snow.

Fesler and Fredston asked Doc Crouse to accompany them and point out where his relatives and the two dogs had triggered the avalanche. Avalanche rescue dogs and their handlers led the search that eventually located the two buried men, who had not survived. The accident report did not mention whether the rescue dogs were able to locate the buried dogs.

It appears that several distractions kept this group from even thinking about avalanches. It was a beautiful spring day, and it was Easter Sunday—a great day for a snowshoe tour with friends, relatives, and the dogs. The group was probably unaware that they were in avalanche terrain, and that a rapid thaw had warmed and weakened the snow cover to its breaking point. Their lack of awareness led to an unforgiving outcome.

A sunny walk in the mountains of Eagle River turned deadly on Easter Sunday when an avalanche claimed the lives of two men and their dogs. Under cloudless skies, Bill Crouse, 44, and his stepson, Don Zimmerman, 26, were snowshoeing above timberline on a flank of Mount Magnificent when a sugary layer of snow beneath them collapsed, triggering a massive slide that buried the pair, said Lt. Chuck Lamica, the Alaska State Troopers’ statewide search-and-rescue coordinator.

Doc Crouse, Bill Crouse’s brother, was also buried in about a foot of snow but dug himself out and sought help at the family’s home on Cates Avenue, a steep road that zigzags into the mountains above Mile 6 of Eagle River Road, Lamica said. The men had followed the switchbacks to the road’s end. They proceeded to snowshoe through chest-high snow on a trail that winds into a bowl carved into the mountainside. They were about halfway across the snowy amphitheater, traveling in a line, when disaster struck, Lamica said. Avalanche experts had feared that something bad would happen this weekend.

A holiday weekend combined with warm weather and unstable snow had rescue workers on edge. “When it’s beautiful, bluebird skies and the snow is just waiting to give . . . I woke up feeling it was going to be a disastrous day,” said Tom Crockett, state parks ranger and the on-scene operations chief. Fifty rescuers responded to the 12:45 p.m. emergency call, including troopers, firefighters, park rangers and members of Alaska Mountain Rescue Group, Crockett said.

A trooper helicopter ferried avalanche experts Doug Fesler and Jill Fredston to assess the danger before allowing rescuers in. Fesler and Fredston asked Doc Crouse to accompany them to point out where his relatives and the two dogs were trapped. “He was absolutely instrumental in finding the area,” the size of about three football fields, Fesler said. Three avalanche rescue dogs detected the victims’ location. Fesler said Crouse told him the avalanche occurred about 10 a.m.

Rescuers on snowmachines attempted to reach the site, but their sleds got bogged down in the heavy, wet snow. Some abandoned their machines and slogged uphill on snowshoes to reach the victims. Others were taken in by helicopter, Lamica said. Crouse and Zimmerman are the seventh and eighth Alaskans killed by avalanches this winter, Lamica said. On Thursday, an avalanche near Mile 6.6 of Hiland Road in Eagle River buried a telemark skier for half an hour before his buddy dug him out. The skier, John Stroud, activated an avalanche beacon, enabling his friend to find him.

Two dogs accompanying the men perished. Sunday’s avalanche not only buried Crouse and Zimmerman but also triggered a series of three or four other slides in the area, said officials at the command center on Eagle River Road. More avalanches along Eagle River and Hiland roads are expected, Lamica said. “I wish I could put up a big sign that says Do Not Enter,’ ” he said.

Several factors contributed to Sunday’s fatal slide. Heavy snow had blanketed the steep terrain in recent weeks. Several cold snaps before that, followed by relatively high temperatures, made for dangerously unstable snow. Another factor was the weight of the three men and two dogs walking closely together, pressing down on a sensitive snowpack. “These guys, unknowingly, walked into a booby trap and pushed the button,” Fesler said. People who venture into the mountains this time of year should know the dangers and take precautions, Fredston said.

Steps include receiving instruction in avalanche awareness, wearing a beacon, avoiding steep slopes and adding space between people traveling in a group. “It’s possible to go into the mountains and be safe, but it takes knowledge,” said Crockett, standing in the sunshine. Many people lack the skills to read snow accurately because they haven’t invested the time in learning it or they miscalculate the conditions. It’s tricky stuff, rescuers acknowledge.

“From a layman’s point of view, I just wouldn’t go out there,” said Anchorage Police Lt. Paul Honeman. Lamica said that as he and his wife drove along Eagle River Road before the deadly avalanche Sunday, they counted several fresh slides in the mountains. Climbing to elevation is fun, but Lamica said he sticks to valleys this time of year. “There are times when it’s safe, but not in late March, early April,” he said. 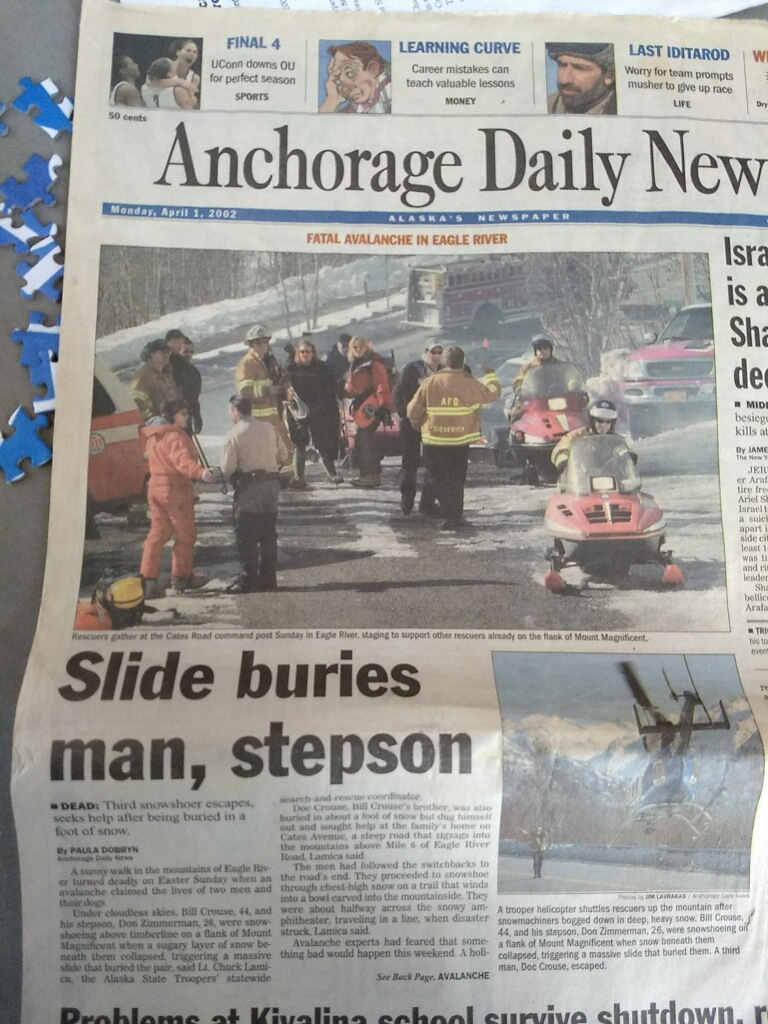 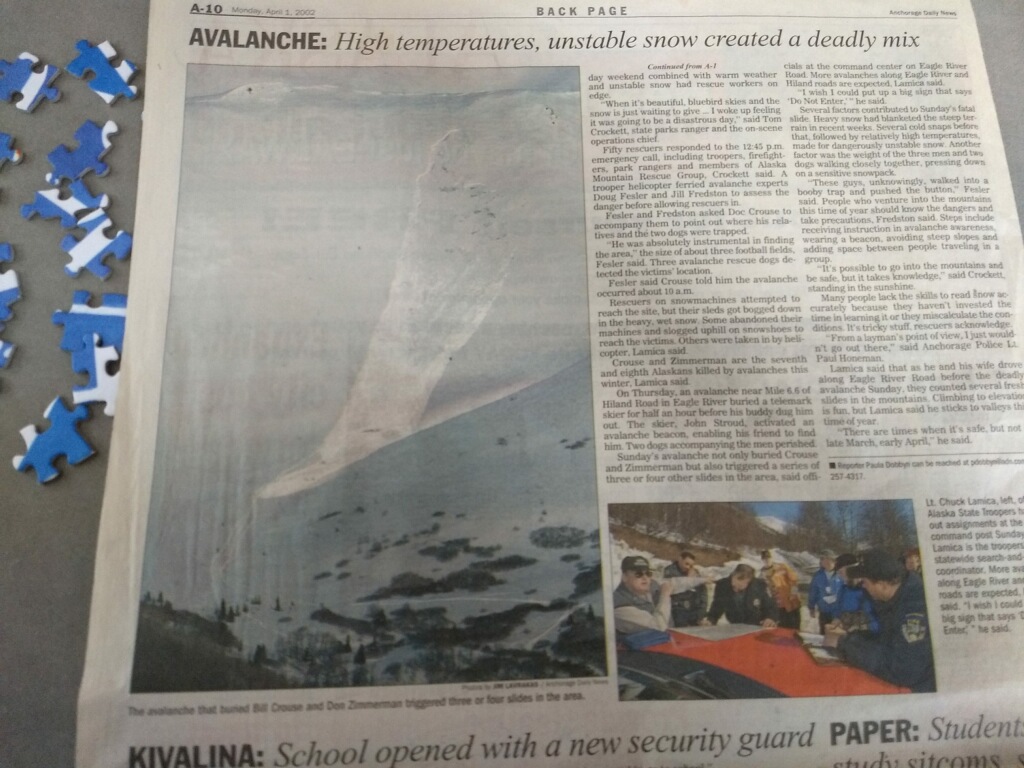