No formal pits were dug by Peter or David. No known instability tests were conducted by Randy.

The leeward, wind loaded aspects, of the descent route Randy took, were not well understood as loaded aspects by either Peter or David. There was some confusion about changing wind directions during the storm and therefore no clear understanding of the larger pattern of Southwest to West aspects loading at upper elevations. Peter and David did not read the forecast that had expired on 11/20, which indicated a considerable avalanche hazard for wind slabs on south to west aspects at upper elevations (3500’+). Observations on 11/20 from the public indicated remotely triggered avalanches, one human triggered avalanche, whumphing and shooting cracks on Southwest aspects. They were aware of recent winds from weather station data. Throughout the day on 11/20 wind speeds increased to 51 MPH from the East, loading Southwest to Northeast slopes at upper elevations.

Events Leading to the Avalanche

Both Randy and David had been backcountry skiing in Hatcher Pass on the 17th and 18th. The snow quality was not perfect and finding good snow was tricky. David toured on President’s Ridge on Nov. 17th assessed that there was likely good snow in the bowls east of President’s Ridge, but had to descend due to time. Randy found good snow on Hatch Peak this same day. On the 18th David and Randy toured in the Sin Valley area, and David mentioned finding powder in the President’s Ridge area. They loosely planned to ski President’s the next chance they had to get out.

On November 22, the day of the accident, Peter Smith and David began their ski tour at the base of President’s Ridge. The plan was for Randy to catch up to them. David was very familiar with this particular area which he toured many times before, most recently on the 17th. Peter and Randy had less recent familiarity, but know Hatcher Pass backcountry touring routes quite well. The ascent route revealed a lack of good snow due to wind scouring on the 20th.

Approximately 20 minutes from the top of a broad, low angle ridge feature, half way up the mountain, Randy caught up to the touring party. This location is a natural stopping point and an island of safety. The party discussed the option to go to the top of the ridge, which would put them on a high point of the greater Marmot Mountain massif. It was at this point that the party decided not to ascend further and to descend from this point. They were looking for safe routes with good snow.

David first checked out the Southeastern slopes by poking around the edges while Randy and Peter watched. David had been paying attention to the winds from the previous days and understood that they likely increased the avalanche hazard on leeward slopes. Identifying the leeward aspect and the distribution of wind slabs was confusing for David, which left some uncertainty in his assessment of the hazard. He thought there was a chance the east bowls would be sheltered from the recent winds and identified the Southeastern bowls as being generally lower angle. The Southeastern slopes were firm and wind scoured and not suitable for skiing and David rejoined the group.

The group discussed the Southwestern slopes without consensus. Randy began moving toward the Southwestern slopes (leeward and wind loaded). David was thinking the group would likely descend their ascent path, but this plan was not well communicated or understood by everyone. David and Peter both had misgivings about descending the route Randy chose. Randy’s route descended into a significant terrain trap. It would also have required re-climbing the descent route to exit.

The group plan, according to Peter and David, was loose and somewhat ill defined. At some point before Randy became separated from David and Peter, David and Peter suggested to Randy to ascend back up to the ridge. Randy committed to his descent, the group became separated, and communication at this point became ineffective. Randy continued to the point where he was not visible. In examining Randy’s track, after he went out of view of David and Peter, it appears he continued to descend, then changed his course to a long traverse, which brought him closer to a wind loaded ridge. He may have been trying to regain the ascent ridge and rejoin the group.

Peter and David wrapped around the southeastern side of a small knoll on the ridge which would better position them to view Randy. As they came around the knoll where they gained visibility of the slope Randy had descended, they noticed an avalanche had occurred. The time was approximately 14:00. Peter and David began calling Randy’s name and got no response.

Peter and David, upon noticing the avalanche (~14:00) and seeing no sign of Randy or response to calling his name, immediately turned their beacons to search mode and began descending the bed surface. Peter triggered the SOS feature on his inReach device. There was some concern for hang fire to the skier’s left. They identified this problem, chose to avoid it, and ruled that their descent to rescue Randy was the best choice. The top third of the bed surface had some piles of debris that they investigated without acquiring a signal. Some issues arose with Peter’s beacon auto-reverting, but they cleared up the confusion and continued to descend. The slope progressively steepened making descent slow and especially difficult in the final segment which had several small vertical drops. Peter descended on skis while David was forced to remove his skis as he entered the chute, and slide on his butt, periodically arresting his descent with his feet. There was a sense of urgency that made David and Peter take a bit of risk descending quickly, but they were able to make it down the chute without injury. The chute was steep, firm and rocky. The total descent took approximately 15 minutes.

Peter made it to the base of the slope, with David close behind. Peter acquired a signal and David was able to pinpoint the location of Randy’s burial with the smallest reading on his transceiver being 1.6 meters, within approximately 3-4 probe attempts. The debris was very dense to shovel, but did not require cutting blocks. Randy was found face down (prone), with his feet downhill, 4 feet deep. Peter and David cut off the shoulder straps, and continued digging around Randy until they could turn him over. The time was approximately 14:30. (30 minutes from the time they began descending to dig-out). There were no signs of life. Peter and David began CPR and continued for an estimated 30-40 minutes.

Two unknown bystanders observed the aftermath of the accident from the highway, hearing Peter and David calling for Randy and seeing that there had been a recent avalanche. They made a cell phone call to 911 at approximately 14:30 and hiked up to Peter and David from the road. They assisted in the final recovery efforts and helped move Randy’s body a short distance away from the potential path of future avalanches that may come down. The bystanders then descended to the road to assist in identifying the location to the responding AK Troopers. Palmer Fire department was alerted and arrived on scene. David also made a call out to 911, once they had completed their attempted rescue. Eventually Peter and David were advised by the rescue crew to walk out towards the road to meet the rescue groups that were near to them.

Light was fading and avalanche stability was in question. Rescue groups decided to wait until the next day to proceed with recovery and everyone returned together safely to the road

The next day, November 23, an Alaska State Trooper was on his way to the scence . A recovery group including Randy’s brother Steve, David, Peter and several friends arrived to recover Randy’s body. Both Allie Barker (HPAC), Jed Workman (HPAC), and Eeva Latuso (ASARD) arrived around 11 am to conduct an accident investigation. Due to existing avalanche hazard above the location of Randy’s body, Jed advised the group of the present avalanche hazards, and informed them that agency SAR was on hold due to avalanche hazard conditions.

Jed, Allie, and Eeva proceeded to the starting zone to conduct an accident investigation. We then descended and joined the group in assisting the recovery of Randy’s body.

Steve, Peter, and David successfully recovered Randy’s body from the burial site, utilizing several spotters, including Steve’s wife, in safe zones. Once the body was clear of the existing avalanche hazard, a number of people assisted in the final leg of the recovery.

All members of the party had 38, or more, years of backcountry experience in avalanche terrain. All members had taken an avalanche level 1, or higher, class at some point in their lives.

This group was an experienced group of backcountry tourers, which aided in their ability to conduct a companion rescue, in a timely manner.

Becoming separated without a solidified plan contributed to confusion and reduced chances to re-assess their choices.

This avalanche was a relatively shallow avalanche. The majority of the debris carried Randy through a steep rocky chute (avalanche track), and burred him 125 cm deep in a very tight ravine.

Impact/trauma with rocks in the track could have killed Randy. The deep ravine terrain trap significantly increased the depth of the burial.

While Peter and David were able to respond quickly, there was an amount of time lost in between when they lost sight of Randy, and when they identified the avalanche had occurred. 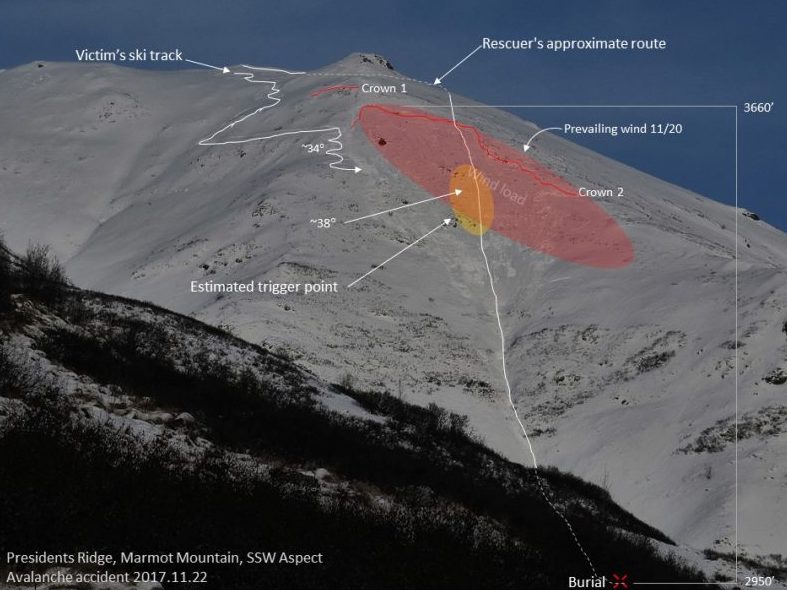