From “The Snowy Torrents”

Accident Summary: The Eklutna Glacier lies approximately 25 air miles east of Anchorage, Alaska in the Chugach Mountains.  On Saturday, April 10, two men and a woman set out on an extended climbing – ski-touring excursion.  They were well equipped and carried both skis and crampons.  Their plans were to traverse the Eklutna Glacier snowfields and to arrive after about a week at the community of Girdwood.  The three were John Samuelson, Hans van der Laans, and Dr. Grace Hoeman, all experienced mountaineers.

The three climbers were driven by snow machine to the foot of the glacier where they began their trek.  Using crampons, they ascended a steep, southwest-facing slope to a cabin located at the 5000-foot level on a rock outcrop above the glacier, and there they spent the night.  The weather deteriorated badly overnight so that on Sunday, April 11, they were forced to spend the day in the cabin.  The weather did not improve the following day as snow continued to fall, accompanied by strong winds. Because of the weather, the group decided to cancel the rest of their tour and return to Anchorage.

At about 13:30 on the 12th, the three climbers began descending the steep snowslope between the cabin and the glacier.  This was the same slope they had climbed two days earlier; at that time the snow surface had been hard, following several clear, sunny days and cold nights.  Two days later, however, 2 feet of new snow covered the slope, prompting the three climbers to stop before entering and discuss the safest route.  In spite of poor visibility, they had seen several fresh avalanches on adjacent slopes and were suspicious about the one they had to cross.  It was agreed to cross high, one at a time, and reach the relative safety of a ridge on the far side.

Samuelson noticed his companions lower on the slope and came to a stop. Just as he was about to shout them back off the slope, the snow fractured all about him.  He was carried helplessly downhill on a fast ride but fortunately came to rest buried only to the hips.  Hoeman and van der Laans were totally over whelmed by the avalanche.  Both were carried out onto the glacier and were buried under tons of snow!

Samuelson managed to dig himself out and immediately began searching for his companions.  He probed the debris for 2 hours with his ski pole but found nothing.  With little hope of success, Samuelson began his descent, arriving at the south end of Eklutna Lake at 20:30 where, because of exhaustion, he set up camp.  The following morning, April 13, he reached the highway and hitched a ride to Mirror Lake where he contacted the Alaska State Troopers.

Rescue: The State Troopers immediately called the military rescue group at Elmendorf AFB in Anchorage.  At 13:10, Samuelson and a state trooper were picked up by a rescue helicopter and flown to the toe of the Eklutna Glacier.  However, poor visibility prevented the rescuers from viewing the avalanche area.  They then returned to Ft. Richardson, Anchorage, and met with the Army Mountain Rescue Team.  At 15:00, six members of the Army Mountain

Rescue Team plus four members of the civilian Alaska Rescue Group were air lifted to the south end of Eklutna Lake where a base camp was established.

On the morning of April 14, the 10 rescuers were flown to within a short distance of the accident site.  Upon reaching the avalanche area, they discovered that the recent snows had obscured all traces of the avalanche.  A probe line was established, but a lengthy search revealed no sign of the buried victims.  Rather than return to base camp, the rescuers dug snow caves and stayed overnight at the accident site.

Probing the following day again revealed no clues.  Because of poor weather and the danger of more avalanches, the rescuers left the area at noon and were airlifted back to Anchorage.  In a meeting at Ft. Richardson, it was decided that the Army would provide transportation and communications for a team of 20 volunteers from the Alaska Rescue Group to continue the search.

On April 16, the rescuers were airlifted to the accident site and a camp was established.  The avalanche area was methodically probed for 2 days with negative results.  Finally, on the 18th, the search was cancelled, and all rescuers were flown out of the area.

The search came to a final conclusion in early summer when the melting snow revealed the bodies of the two avalanche victims. Dr. Hoeman was found face down, head downhill, in a stretched out position with ice axe in hand.  Her pack was a short distance away.  van der Laans was found in a vertical position, head down and feet up.  His heavy pack with skis still on his back; this evidently was the reason for his being found in such a helpless position.

The discovery of the bodies also revealed to the rescuers that their earlier searching and probing had been badly misdirected.  Because new snow had concealed the avalanche debris, the rescuers had mistakenly probed only the very edge of the avalanche; this explained their unsuccessful recovery attempts.

Comments: The three mountaineers involved in this accident were highly experienced, a fact that makes the actions of two of them all the more puzzling.  Dr. Hoeman and van der Laans voided the safety plans agreed upon by moving onto the slope beneath Samuelson.  Instead of crossing high and one at a time, all three climbers were suddenly on the slope at the same time.  This mistake proved to be fatal for Dr. Hoeman and van der Laans.

As a final footnote to this tragedy, it is interesting to observe that Dr. Hoeman was no stranger at all to avalanches.  Indeed, her husband had died an avalanche victim himself only a few years before. 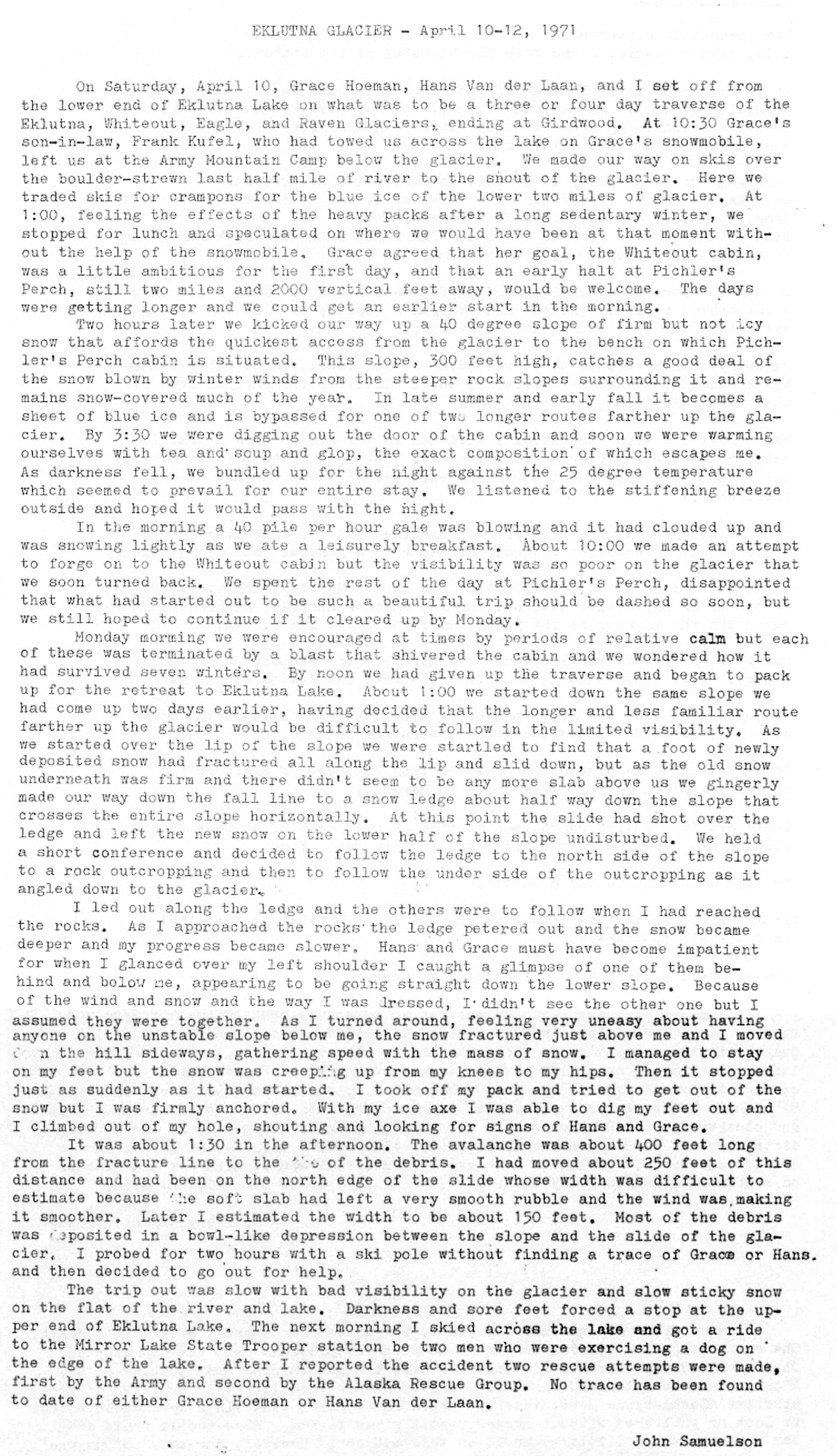 John Samuelson's account of the Eklutna Glacier avalanche. Published in May 1971 Scree.