On Saturday December 13, 2008, an experienced party of five AT skiers and one splitboarder parked at the Sunburst/Magnum parking lot at Turnagain Pass with the intention of skiing Magnum and Cornbiscuit. The party read the CNFAIC avalanche advisory that morning, and they were aware of the persistent weak layers of facets and surface hoar at the bottom of the snowpack. Several of the skiers had skied Sunburst the day before and noticed no signs of instability and many ski tracks on the slope. They observed someone digging a snowpit on Sunburst that day and noted that his compression test results showed good stability. The last significant snowfall was on Dec.8-9 when the Center Ridge weather station at 1800’ in Turnagain Pass recorded 27 inches of snow and 2.5 SWE. The party skinned up the northern rocky ridge of Magnum and made one run down the SW face of Magnum. Several of the skiers jumped off of a small rock outcrop during their run, further testing the slope stability with no results. The party skinned up to Superbowl Pass between Magnum and Cornbiscuit and noticed there were many other ski parties in the area. The slopes were covered in ski tracks. They noticed no signs of instability and could not see, and therefore did not know about, the remote-triggered avalanche that occurred on the SE face of Superbowl Peak earlier that day.

The party continued up the ridge onto Cornbiscuit and decided to make a run off the south aspect. They noticed that the temperature had warmed up significantly since that morning. They also noticed 5 sets of previous tracks lookers right of the line they intended to ski and ride. The time was about 3:30pm. Going one at a time, Skiers #1 and #2 skied down a planar face, over a convex rollover, and then onto a 40 degree wide spine with gullies on either side. The total run length was about 1200 feet. Skier #3 skied down next and stopped about 2/3 of the way down to rest, below the rollover and about 100 feet above the alders, out of view of the rest of her party above. Splitboarder #4 rode down next, unaware that Skier #3 had stopped to rest partway down. Splitboarder #4 triggered the avalanche when she made a hard turn on the lookers right side of the rollover. There was a shallow rocky section on the rollover under 1.5 to 2 feet of snow that may have been the trigger point. Splitboarder #4 did not get caught and immediately noticed that Skier #3 was standing about 500 feet below. She yelled down to Skier #3 who immediately noticed the avalanche heading her way. Splitboarder #4 also yelled up to Skiers #5 and #6, who were still at the top, that there had been an avalanche.

Skier #3 tried to ski out of the way but was caught and swept into the gully on the lookers left side of the wide spine. The avalanche fanned out into both gullies on either side of the wide spine. She tried to dig in and self arrest and fight/swim her way out of the slide but quickly realized she had no control. At one point she momentarily popped up onto the surface but was quickly pulled under again. When the avalanche slowed down, she pushed a hand up but didn’t have a chance to create an air pocket with her other arm. She knew she was buried deep but was confident that her partners would find her. Both of her skis came off during the avalanche, and she ended up buried near the toe of the debris in a small depression

Skiers #1 and #2 were in the runout zone and had to ski out of the way of the avalanche while still trying to watch for Skier #3. Skiers #1 and #2 and Splitboarder #4 knew that she was swept into the lookers left gully. Once the avalanche stopped they took off their skis and postholed their way back over to the debris field to begin a beacon search.

At the same time, Splitboarder #4 rode down the bed surface and found one ski and one pole. She grabbed them and headed down with her beacon on receive. Skiers #5 and #6 skied their way down to the rollover where they noticed shooting cracks just above the crown face on a 35 degree slope. They skied down the flank of the avalanche and then onto the bed surface with their beacons on receive. Skier #6 zigzagged his way down the slide path making sure Skier #3 was not buried higher up in the debris field. Splitboarder #4 was the first to pick up a signal but had problems with her distance reading.

Skiers #1, #5, and #6 got a minimum reading of 2.4 meters on their beacons. The party probed 4-5 times with no hits and then dug down 2 feet in a 4’x4’ area knowing that Skier #3 was buried deep. Skier #5 re-pinpointed with his beacon and got a reading of 1.9 meters, then Skier #1 probed 2 more times and got a hit. He pulled his probe out of the snow and everyone started digging. Skiers #6, #1, and #5 dug together on one side, conveyer belt style, and Skier #6 found Skier #3’s arm first. They were able to follow her arm to her head, with Skier #1 eventually using his bare hands to move snow away from Skier #3’s face and airway. Once they cleared the snow from her mouth, she shook her head and began groaning and then breathing on her own.

No one had to administer rescue breathing. The estimated time to airway was 11-13 minutes. She was buried in a sprawled out sitting position 4.5 to 6 feet deep (4.5 feet to her airway, 6 feet to her hips). Once her airway was clear, several folks tried to call for assistance on their cell phones but there was no reception. Because trauma was initially expected before they could completely dig her out, Skier #5 sent Skier #2 back to the car to get helicopter assistance from the multi-agency avalanche rescue training going on 1 mile down the road at the Center Ridge parking lot.

The Alaska State Trooper helicopter was almost back to Anchorage when Skier #2 reached the Incident Command Post in the parking lot. The ship immediately turned around and headed back to Turnagain Pass, landing at the Center Ridge parking lot to pick up a load of AMRG (Alaska Mountain Rescue Group) volunteers. By the time the helicopter took off from the Center Ridge parking lot and headed towards the site of the accident, the party was already back to the road. Two other skiers from a different party showed up to assist with digging at this point. One of theses skiers was a physician, and he began calling out loudly to Skier #3 to help her regain consciousness. This is Skier #3’s first memory after the avalanche.

Once she was completely dug out, other members of her party gave her 4 down jackets, 1 pair of down pants, mittens, and hot tea. She amazingly had no injuries and was able to ski back to the road under her own power. Skier #5 gave Skier #3 one of his skis so that she could ski back to the Cornbiscuit pullout, which took about 20 minutes. Skier #3 and Skier #6 were picked up at the Cornbiscuit pullout and driven to the incident command post at the Center Ridge parking lot where they were interviewed by EMS personnel, state troopers, and CNFAIC employees. The rest of the party skied back to their cars at the Sunburst/Magnum parking lot and then drove to the Center Ridge parking lot.

Some key points brought up by members of the party:

TURNAGAIN PASS — A classic weekend avalanche just south of Turnagain Pass buried a local skier five or six feet deep but friends were able to dig her out alive, according to the Chugach National Forest Avalanche Information Center. The center’s Matt Murphy said Monday that the skier was with a group of skiers and snowboarders descending a peak locally known as Corn Biscuit. The slope is between Lyon and Bertha creeks on the Seward Highway about 60 miles from Anchorage.

Corn Biscuit is one of about a dozen peaks in the Turnagain Pass area that now draw skiers and snowboarders by the dozens, sometimes into the hundreds, on weekends. Murphy said the skier caught in the avalanche was with a group that climbed to Corn Biscuit’s 3,600-foot summit on Saturday. Two people came down without a problem. The third, the skier in question, was on her way down when she stopped to rest beneath a rollover — a terrain feature that looks just like it sounds.

A snowboarder following her down cut a wall of snow loose on the top of the rollover. The skier saw the avalanche start, Murphy said, and tried to get away but ended up getting swept into a gully and buried beneath the avalanche rubble that piled up there. Fortunately, he added, she was wearing an avalanche beacon, and the others with her knew how to use their beacons and probes to locate her beneath the snow. 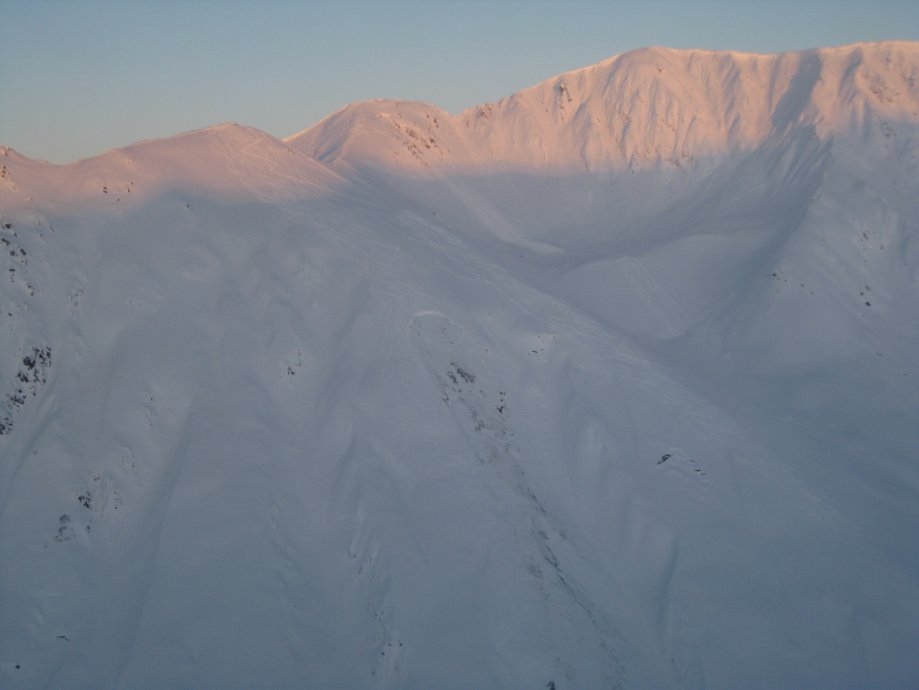 This photo taken from the LifeMed Helicopter gives a great overview of what happened that day. 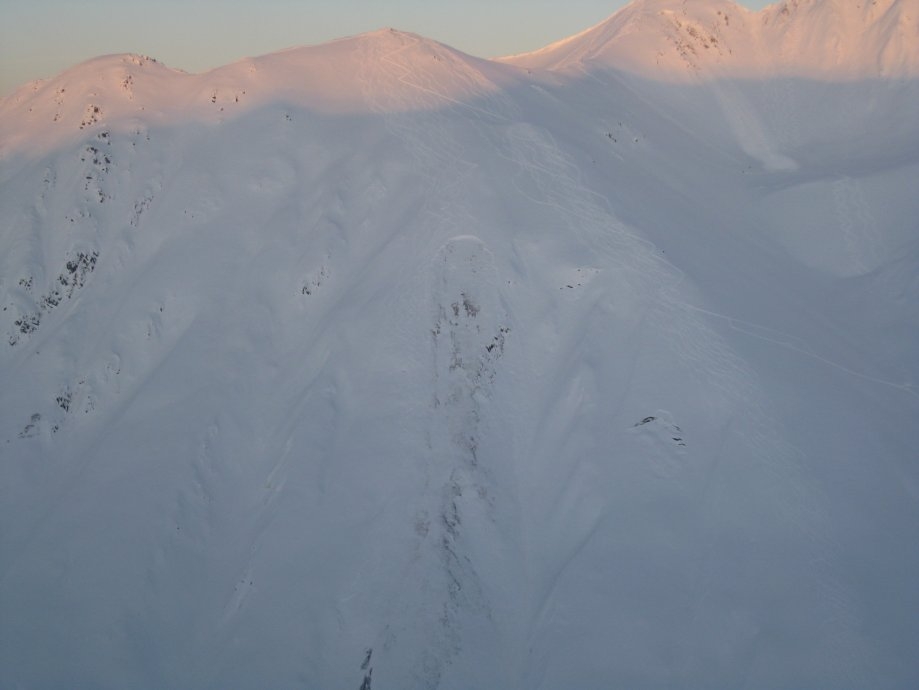 The ridgeline just lookers right of the slide was safely skied because it was lower angled and lacked the rollover. 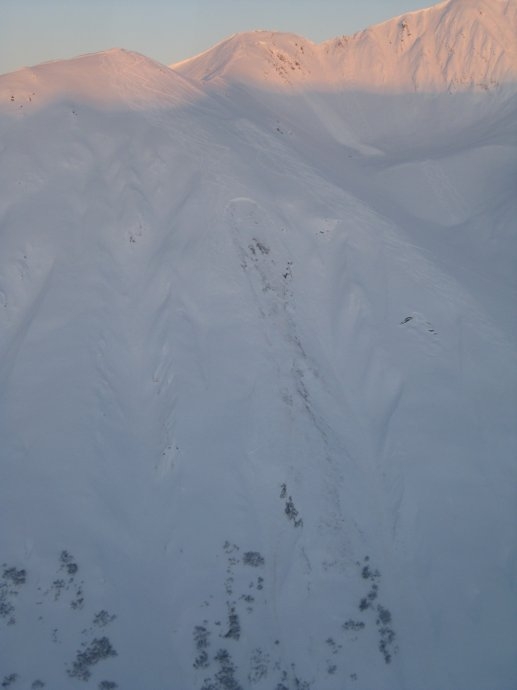 This shot shows more of the track of the avalanche but we still cant see the deposition zone. Notice another skier triggered slide in the background. 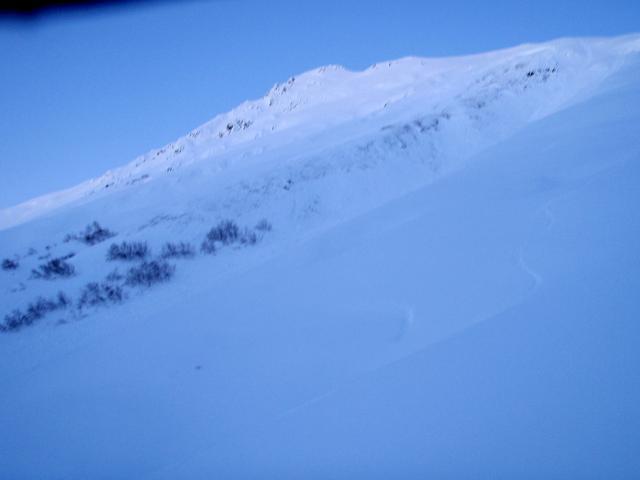 This shot of the gully the slide came down looks like a great example of a cross-loaded gully. Photo by Chris Seaman. 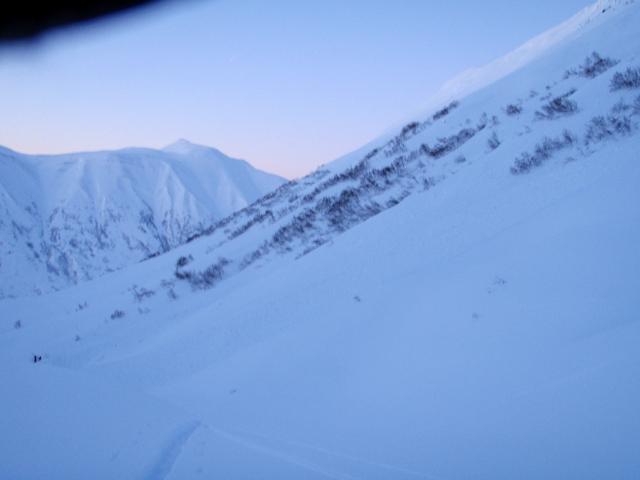 This shot shows the bottom of the track and the deposition zone. Photo by Chris Seaman. 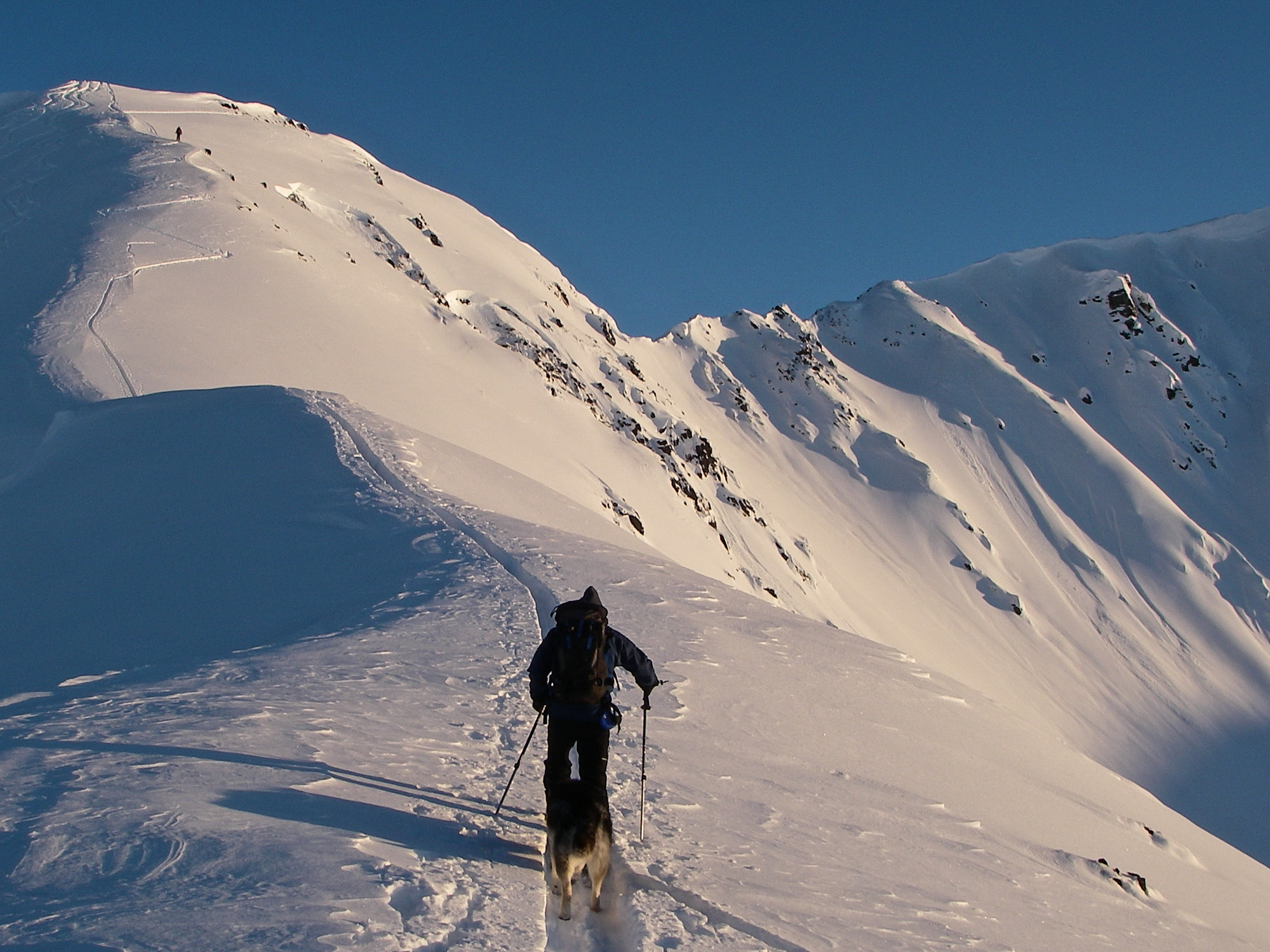 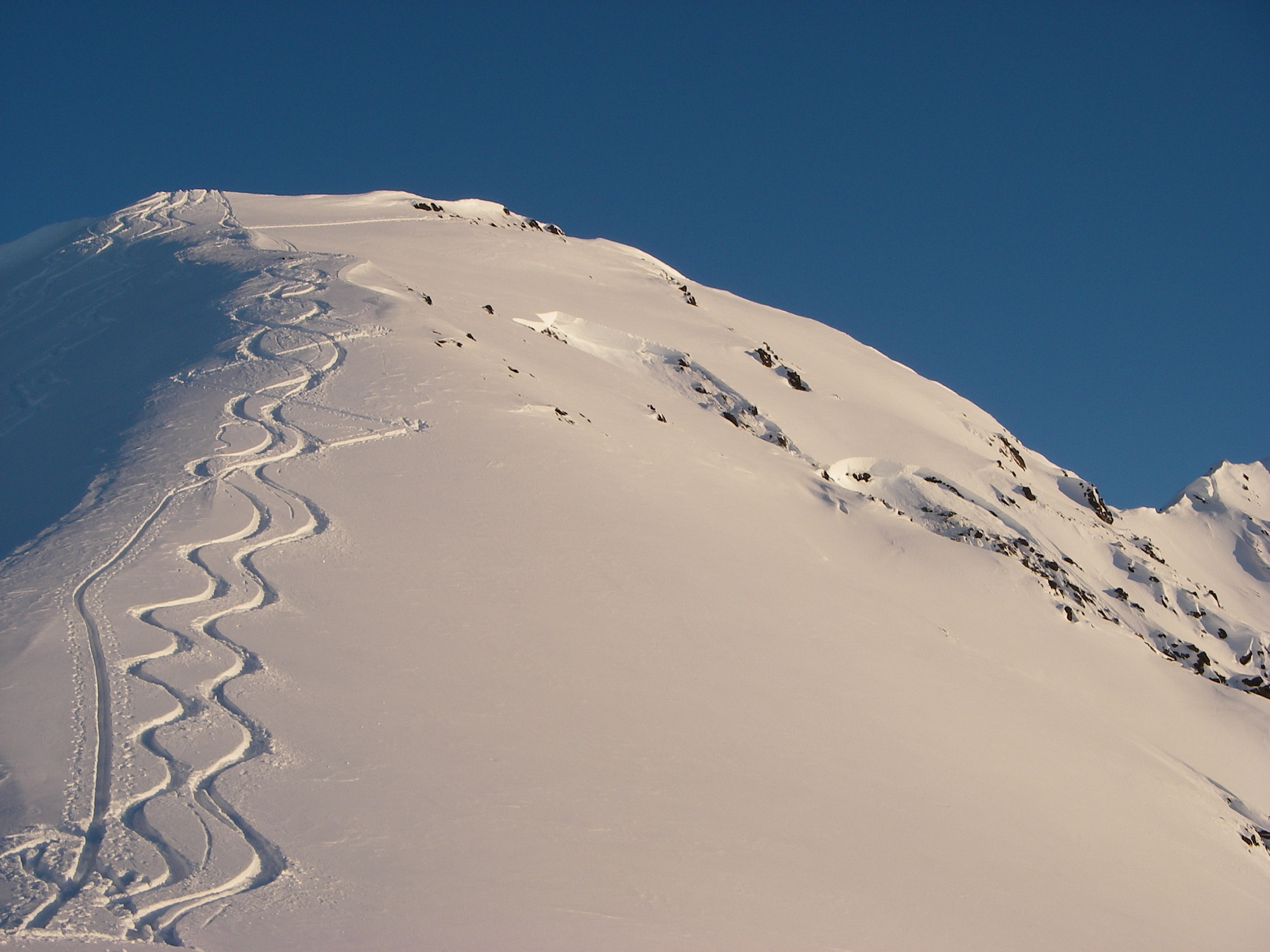