On Saturday, March 28, 2009 a snow machine rider triggered and was buried by a large avalanche near Center Creek in Chugach National Forest, Alaska. Two other riders witnessed his burial by the slide. From interviews with searchers on scene, the victim was doing an “easy” high mark in a terrain trap on a small slope at the base of a much larger/steeper slope and triggered the slide which propagated upslope. Multiple crowns released and swept over him as nearby riders scrambled to get out of the way. The victim was not wearing an avalanche beacon. The subject’s riding partners performed a limited probing search for him in the vicinity of the PLS. One helicopter load of rescuers was dropped off near the scene a few hours later just as Mount Redoubt erupted and sent an massive ash cloud through the Anchorage/Turnagain Pass area of the park, forcing the helicopter to leave the area.

Up to 16 snowmachine riders in the area along with 2 State Troopers, CPG Helo, and one ASARD dog team searched the debris until about 1930 when an approaching storm an darkness required retreat from the scene. The storm lasted four days and deposited approximately 24 inches of new snow in the area. On Thursday, April 2, Alaska Mountain Rescue Group and State Troopers organized a large (in excess of 50 searchers in the field) day-long search effort. Two new feet of snow had fallen. Trooper Helo 1 and DOT bombed hang fire in the search area and along the 10 mile snow machine trail into the area. Additional large slides piled up snow debris piles over 20′ deep along the sides of the search area, but the original debris area itself was not covered by any additional avalanche debris. 4 search dogs, two Recco units, and many probe lines did not find the subject. One 10′ deep hole was dug in the toe of the slide only to find that the probes were hitting a very solid localized ice lens. Mud and ground was found another 12′ below the bottom of the hole.

On Saturday, April 4, a second large search with essentially the same resources was conducted. At 7:00 am as searchers gathered at the base operations staging area, Mount Redoubt AGAIN erupted (the largest eruption to date in this eruption cycle) and dumped 1/4″ of ash on the Kenai Peninsula just south of the search area. An ash cloud observer was posted on site in addition to the avalanche safety observer.

On Saturday’s search, a friend and member of the original snow machine party brought three industrial magnetometers into the field to help search for the snow machine. Effective range on the magnetometers was tested in his shop yard Friday night by burying a snow machine identical to the missing one under a 12′ deep pile of snow with a front end loader. The magnetometers easily picked up a very strong signal from the steel components in the engine and frame at this depth.

All search efforts in the primary search area were negative, and in the afternoon the Recco units and magnetometers were deployed well away from the primary search area as they followed the avalanche toe along several hundred yards of debris field, much of it through a scattering of small spruce trees. The magnetometer found the snow machine at 3:30 pm under six feet of snow at the edge of the debris field over 200 yards laterally and 70 yards downhill from the primary search area. It was detected from a horizontal distance of 15′. The rider was found nearby as the machine was excavated. Somehow, the rider had ridden this distance blindly inside the blast cloud of the avalanche before being overcome by slide debris.

Snowmobiler feared dead after avalanche
March 28, 2009 – ANCHORAGE, Alaska – A 35-year-old snowmobiler is missing and presumed dead after he was buried in an avalanche in the Kenai Peninsula’s Johnson Pass. State troopers say Yancy Flair of Anchorage was reported missing after the avalanche Saturday afternoon.

Troopers spokeswoman Megan Peters says a Chugach Powder Guides helicopter and 14 rescuers on the ground with probes searched for Flair but were unable to find him. Peters says volcanic ash from Mount Redoubt began to hamper the search at about 5 p.m. Saturday. The search was postponed Sunday because of ash and bad weather. Peters says the search might resume Monday depending on weather conditions.

KENAI PENINSULA — The search for the body of 35-year-old Yancy Flair was put on hold Friday by poor weather in the area of Johnson Pass, according to Alaska State Troopers. The owner of two Anchorage tanning salons disappeared and is presumed dead after his snowmachine got caught in an avalanche last Saturday near the confluence of Divide and Center creeks. Heavy snows, continuing avalanche danger and ash fall from Mount Redoubt have all at times contributed to the search being put on hold for much of the week. On Thursday, a break allowed searchers wielding poles and dogs to scour the area. Officials say they suspect his body is buried beneath 20-25 feet of snow.

With foul weather returning Friday and avalanche danger remaining high, the search was again put on hold. Officials planned to resume the search today, weather permitting. The avalanche danger in the Turnagain Pass area, meanwhile, has reached an extreme level, the Chugach National Forest’s Avalanche Information Center warned Friday. Very large human and nature-triggered avalanches have occurred over the past week. “This is the most significant and most dangerous layer of slab snow we have seen all year,” wrote Carl Skustad, the avalanche center’s director, in Friday’s avalanche forecast. 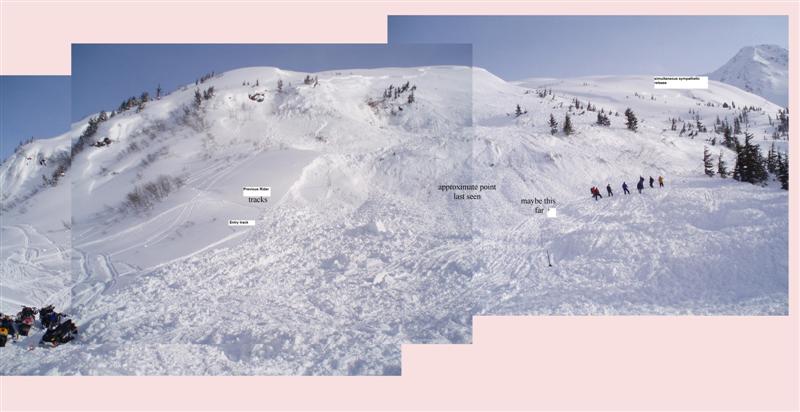 This mosaic shows the accident scene. The victim was travelling from left to right at the base of the slope. 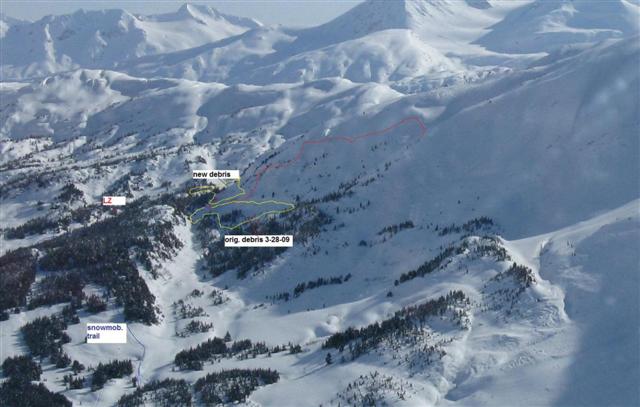 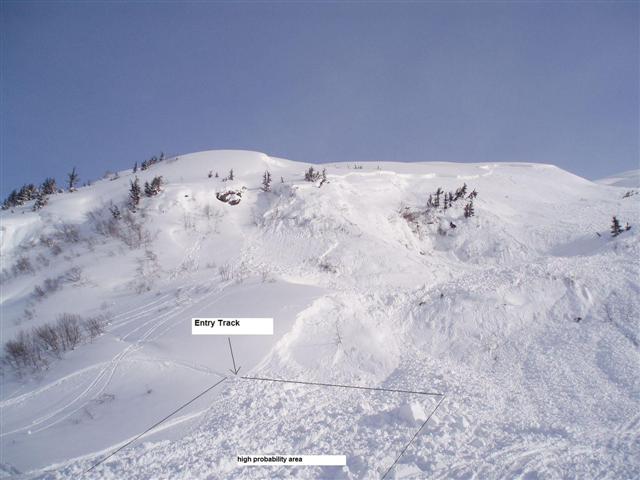 This shot shows where the slide was initiated. 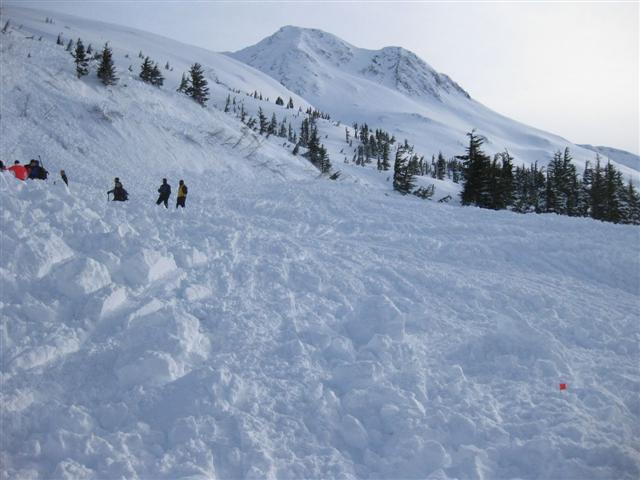 Lateral view of debris and searchers. 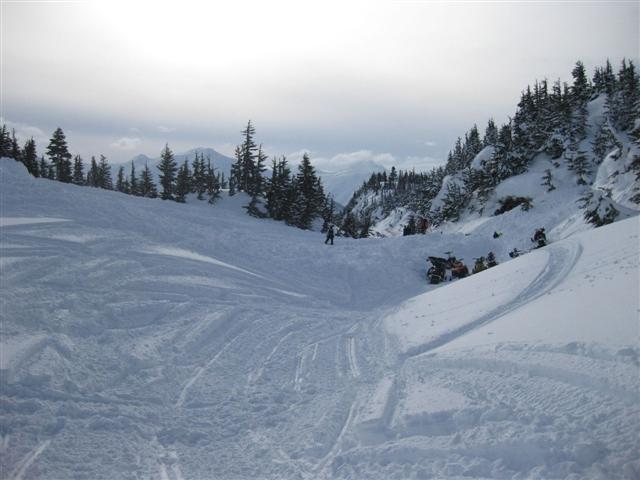 A view of the debris. Searchers suspected a deep burial of the victim in this gully. 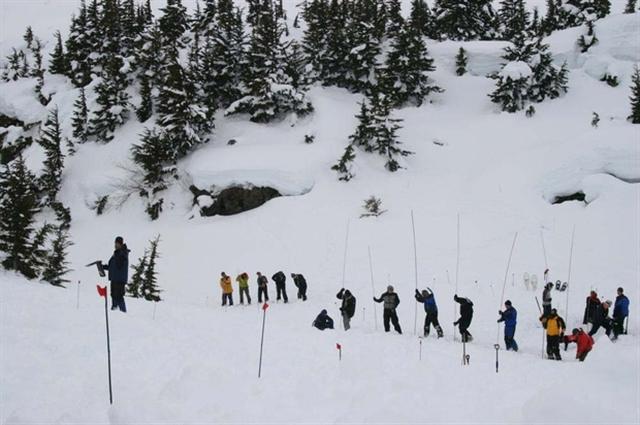 A view of searchers probing for the victim in this ADN photo. 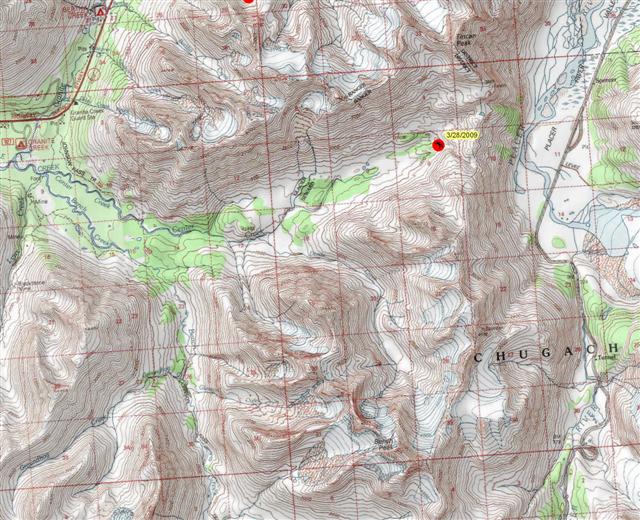