Cornice gives way, plunging climber to his death
AVALANCHE: Partner, only 5 feet away, makes it down to Portage visitor center.
By LISA DEMER
Anchorage Daily News (Published: March 1, 2004)
A great overhanging lip of snow broke beneath a mountain climber near Portage this weekend, sparing his hiking partner but carrying the Alaska Pacific University student to his death thousands of feet below. The body of Joseph B. Neale, 23, was recovered Sunday afternoon. Neale and Jesse “Bill” Billmeier set out for Byron Glacier Peak on Saturday afternoon. They skied up to the base of the ridge, stashed their skis and started climbing up.

They knew the dangers. Neale was an outdoor studies major at APU. Billmeier, 24, graduated with an outdoor studies degree last year. They wore helmets and crampons. They carried avalanche beacons, probes and shovels, Billmeier said. But as they neared the summit around 6 p.m., a snow cornice broke away under Neale. The resulting avalanche pulled him nearly 4,000 feet to his death, Alaska State Troopers said Sunday.

Members of Alaska Mountain Rescue Group recovered his body around 1:30 p.m. Sunday. “He just disappeared. I was right behind him,” Billmeier said in an interview at the Moseley Sports Center on campus. The outer edge of the ridge they were hiking along was just an overhang of snow. They took turns in the lead breaking trail. A couple of times, Billmeier warned Neale that he was getting too close to the edge and he moved closer in to safer ground, Billmeier said. The chunk of cornice that broke off was perhaps 30 feet wide and 35 to 40 feet deep. Billmeier said he was maybe five feet from where it gave way. It was surprisingly quiet. There was no big crash.

“It was kind of a whumph,” Billmeier said. He stepped to the edge and saw his friend engulfed in a mass of snow, rock and debris that tore away out of sight. He called for Neale but heard nothing. The area was too steep and avalanche-prone to climb down to where Neale might be, Billmeier said. So he went down the mountain to get help.

A cleaning crew let him into the Begich, Boggs Visitor Center in Portage Valley, where he called troopers around 7:30 p.m. Troopers sent a helicopter from Muldoon with members of the Mountain Rescue Group. By the time they got to Byron Glacier, it was dark and too dangerous for a ground search, troopers said. The helicopter and rescuers returned Sunday and sighted a dark spot in the avalanche area that turned out to be Neale. Rescuers roped together to reach his body. He had suffered massive injuries, troopers spokesman Greg Wilkinson said. The spot where the body was found was an elevation drop of 3,950 feet from where the cornice gave way, Wilkinson said. The total distance including horizontal movement, then, was even greater. The falling snow also triggered smaller slides that spread across the mountain.

News of the avalanche quickly reached APU students. Neale was kind and good, several said. “He was the kind of guy who would do anything for you,” said Bill Watkin, 20, a marine biology major. If a student were struggling to haul in a class project, for example, Neale would be there asking to help, Watkin said. Neale was from Tulsa, Okla. He was quiet and tall and loved the outdoors, Billmeier said. They had climbed together before. He was a sophomore who transferred to APU last fall. He was already well-known and well-liked and was an excellent student, making all A’s, according to university President Douglas North. North met with APU students Sunday evening to tell them about Neale’s death. The victim’s father flew from Oklahoma and may stay on campus for a while, North told students. “Please extend every kindness and consideration to both him and Bill (Billmeier) and everyone now mourning the loss of a wonderfully sweet, capable and popular young man,” North said in an e-mail version of the statement he read to students. The university plans to hold a memorial for Neale later this week. 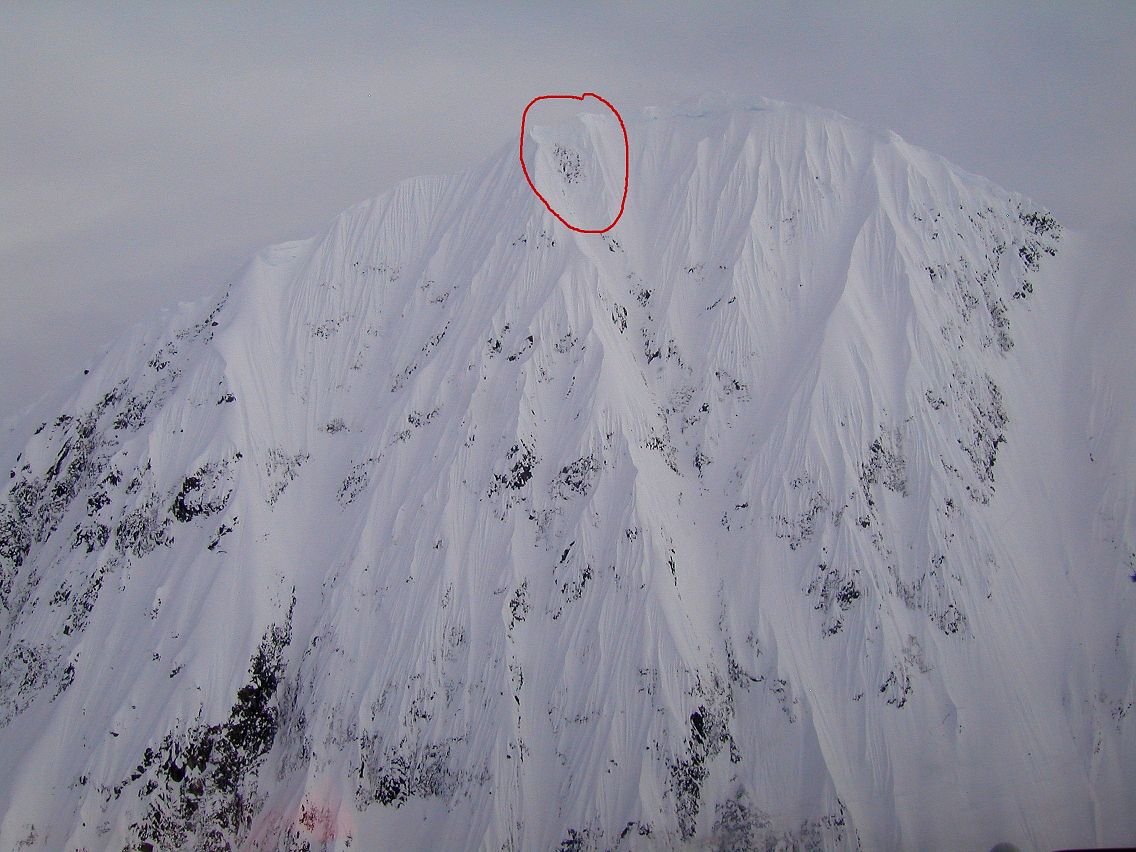 The red circle shows where the cornice broke on Byron Peak. 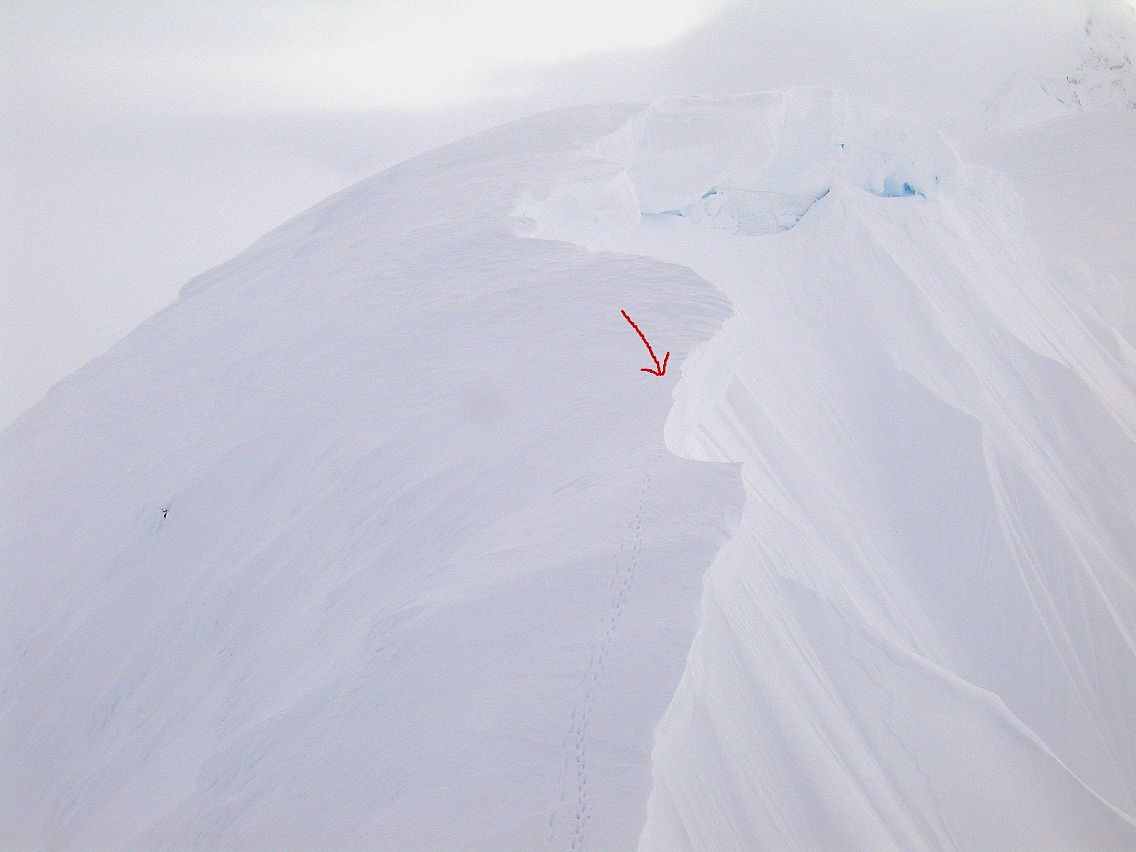 Steps can be seen leading up to the cornice break. 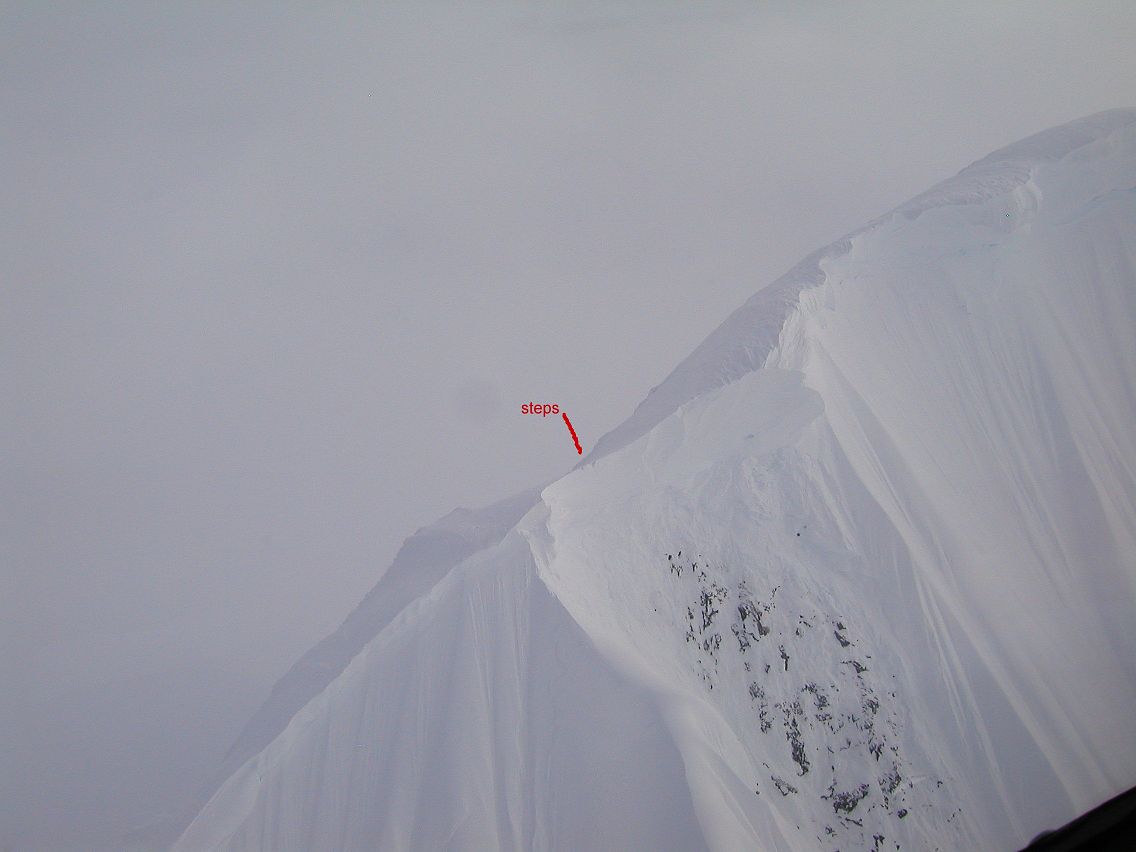 A close up shot of the location of the cornice break.