On February 10th, 2020 a snowmachiner was riding in the Boulder Creek drainage of the Kenai Mountains. The rider accessed the area from a common trailhead at the end of Snug Harbor road, 9 miles south of Cooper Landing. In the early afternoon, the rider triggered a slab avalanche on a relatively short, but steep slope in rolling terrain. The rider was caught, carried and fully buried near the toe of the debris. A group of snowmachiners nearby saw the rider caught in the avalanche and mounted a search within minutes. The rider was recovered after nearly two hours but did not survive. Alaska State Troopers assisted with the body recovery via helicopter later that evening.

Our deepest condolences go out to the family, friends, and everyone affected by this very tragic outcome.

Avalanche Discussion:
The avalanche failed on very weak faceted snow that formed during the early January dry and cold period. The slab over the weak layer was composed of hard snow that had been wind affected. The crown face thickness varied from 1 to 5 feet due to wind loading and scouring but averaged 3 feet. The slab was ~150′ wide and ran around ~250′. The slope was 45 degrees at its steepest and 30 degrees at the shallowest. Only a small portion of the slope was over 40 degrees. This was near a short band of rocky cliffs with significant wind loading.

Weather History:
From January 4th- 20th, the Kenai Mountains experienced a cold and clear sky weather period. Temperatures were generally between -10 and 10 degrees Fahrenheit. Using the Cooper Lake SNOTEL station near the Snug Harbor trailhead, three distinct snow events occurred between January 20th and February 8th. Each event recorded 5-6 inches of new snow. Due to the higher elevation and snowpack investigation at the scene, it is estimated that at least double the amount of snowfall occurred where the avalanche took place. There is no ridgetop weather station nearby for accurate recorded wind data. However, we know from regional observations that each snow event was accompanied by strong east to southeast winds. Additionally, strong outflow northwest wind events occurred on February 1st and 10th (the day of the accident). It is worthy of note that this region is known for very strong wind, both during snowfall events and also during clear sky northwest wind events.

Snowpack History:
The January 4th-20th cold and clear period formed very weak faceted snow in the area. At the time of the avalanche, this weak layer was 10” thick and sat on an equally thick melt-freeze crust. The crust is likely from a rainfall event on December 31st.  A crown profile on February 11th revealed the avalanche failed at the top of the faceted layer. The snowfall events between January 20th and February 8th added an estimated 34-48” of snow over the January facets. This snow saw significant wind effect, and by the time of the avalanche was compacted into a hard slab generally between 2 and 5 feet thick. It was this slab over the weak faceted snow that the rider had triggered (see crown profile in photos). On February 11th, a short distance away from the avalanche we dug a snowpit and conducted stability tests with results: ECTP 20 and 22, failure at top of the facets. The slab here was 2-2.5 feet thick.

All photos were taken the day after the avalanche on February 11th.

* There is no avalanche forecast for the Snug Harbor/Lost Lake region where this accident occurred. The closest forecast is for Turnagain Pass that sits roughly 25 miles to the north. That forecast for this day can be found HERE. 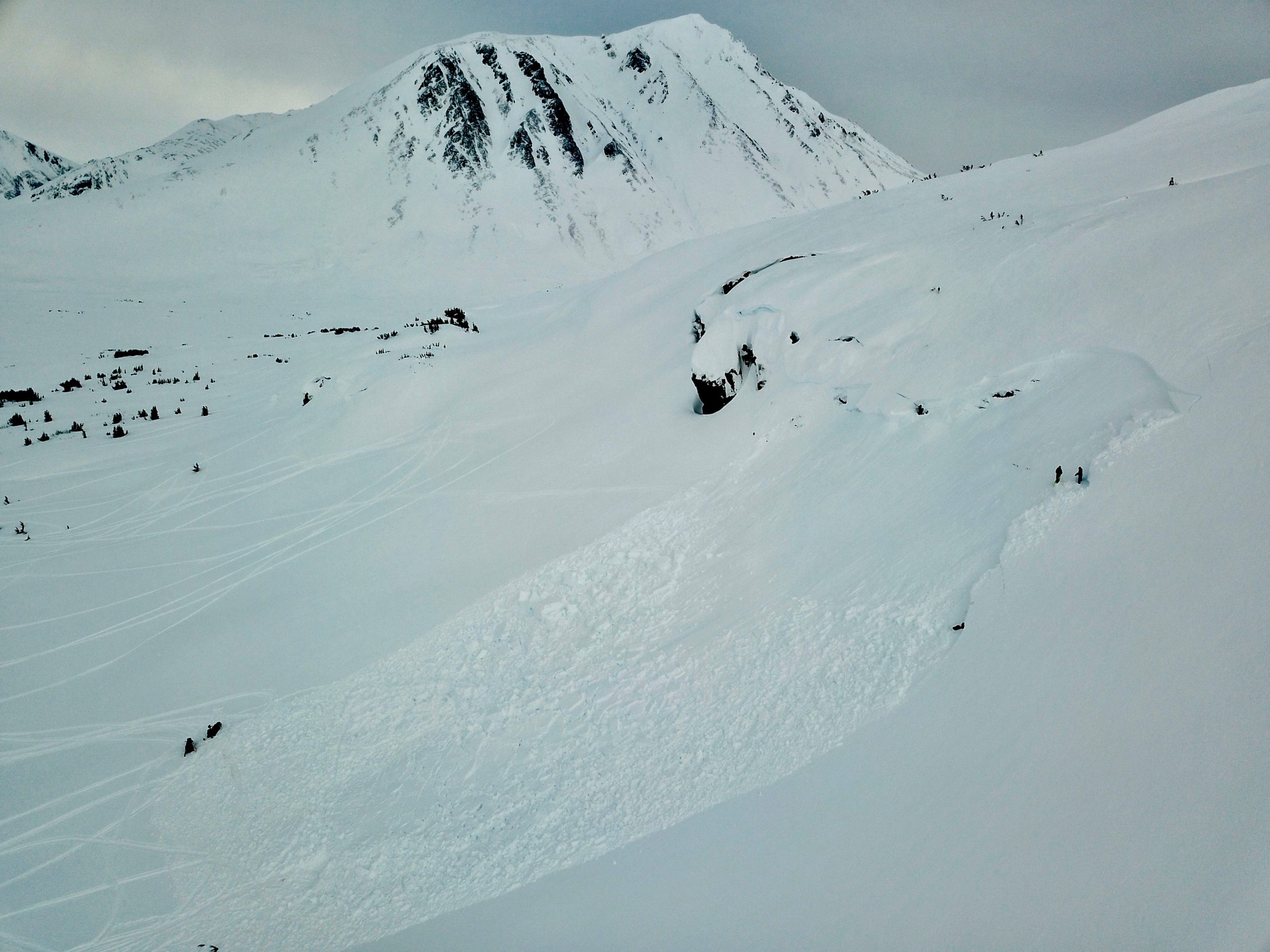 View of avalanche looking to the north. The snowmachines and people are investigating the site. 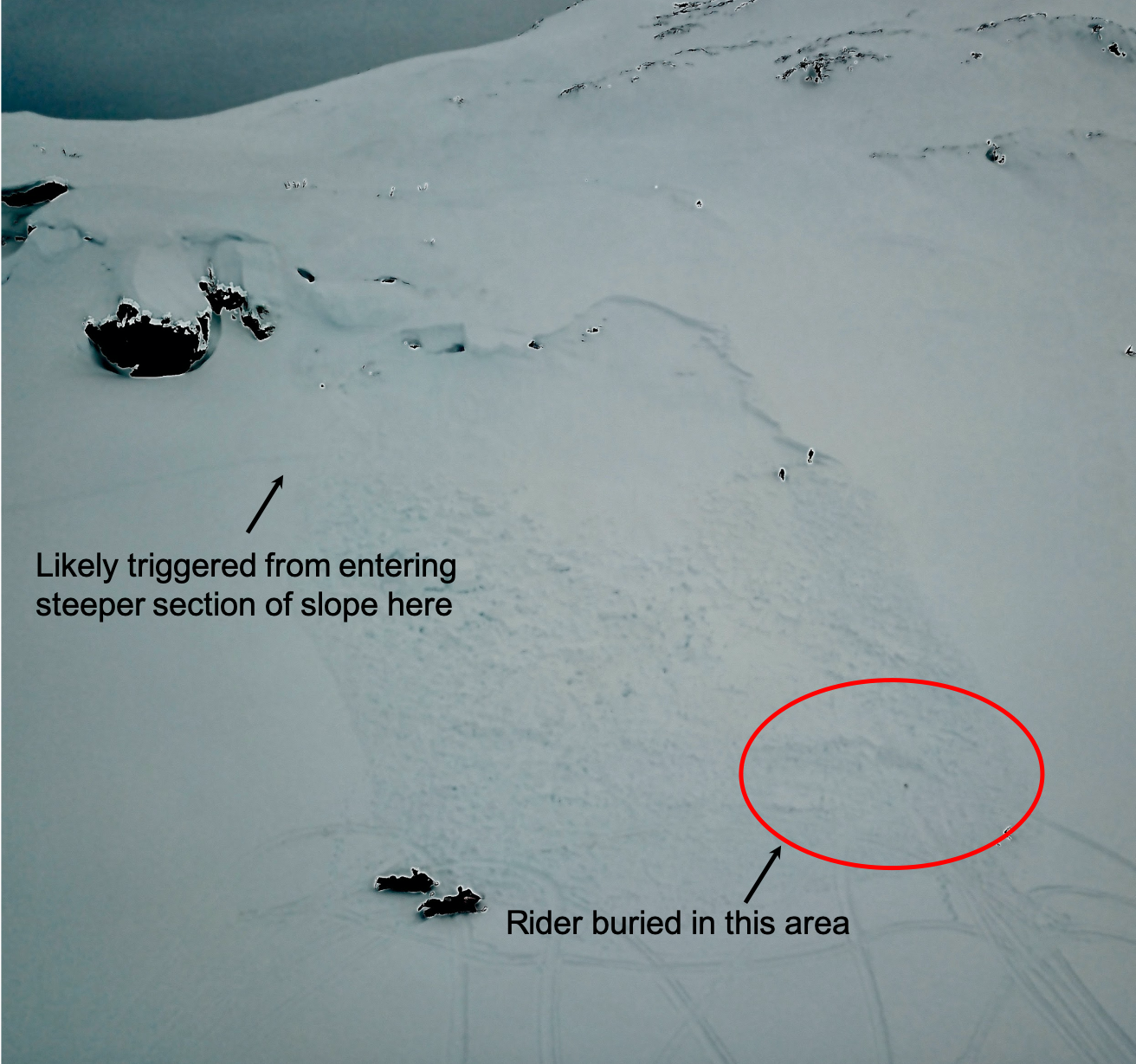 Rider's track entering the slope and location of burial. 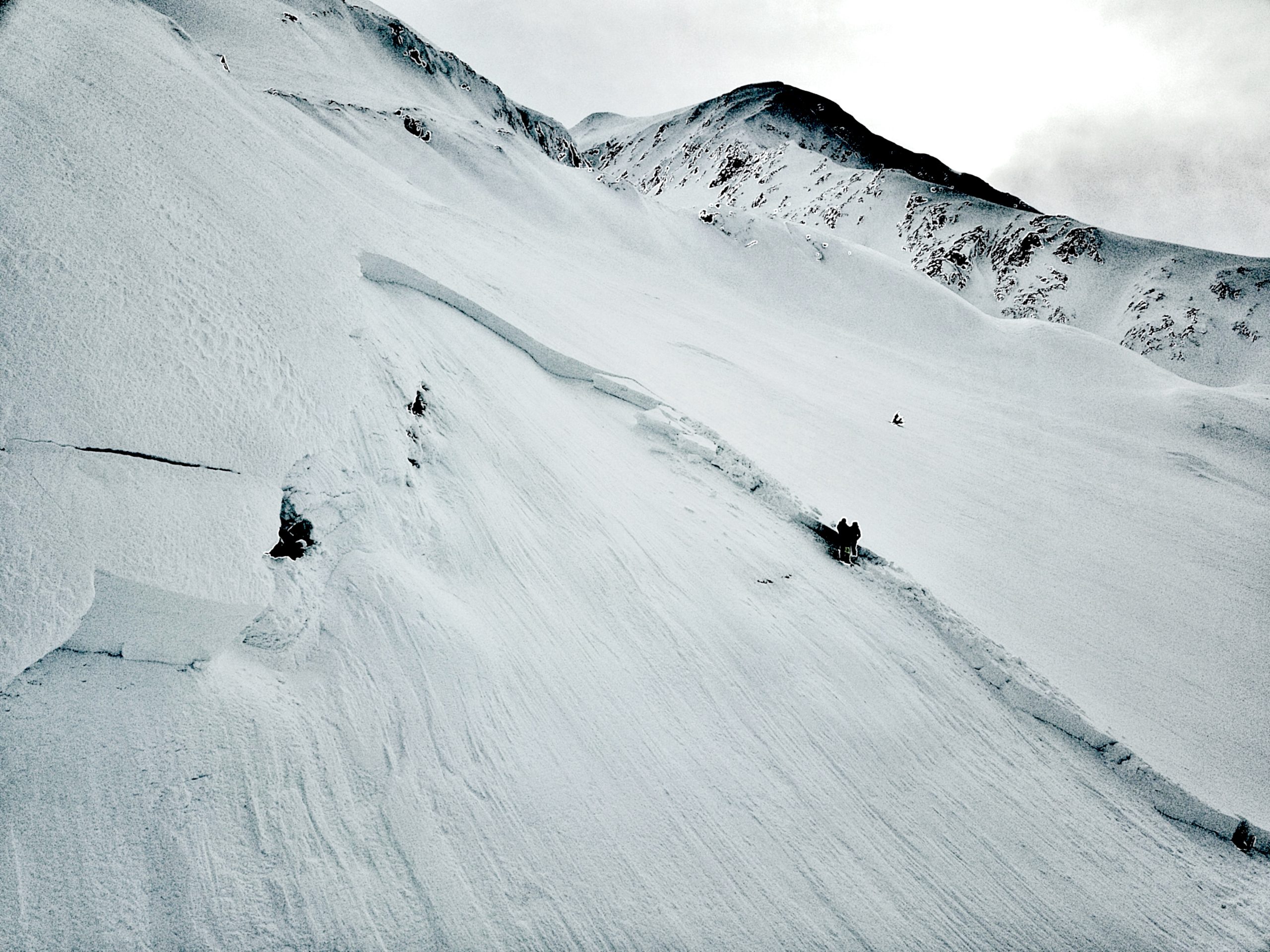 Crown and flank of avalanche 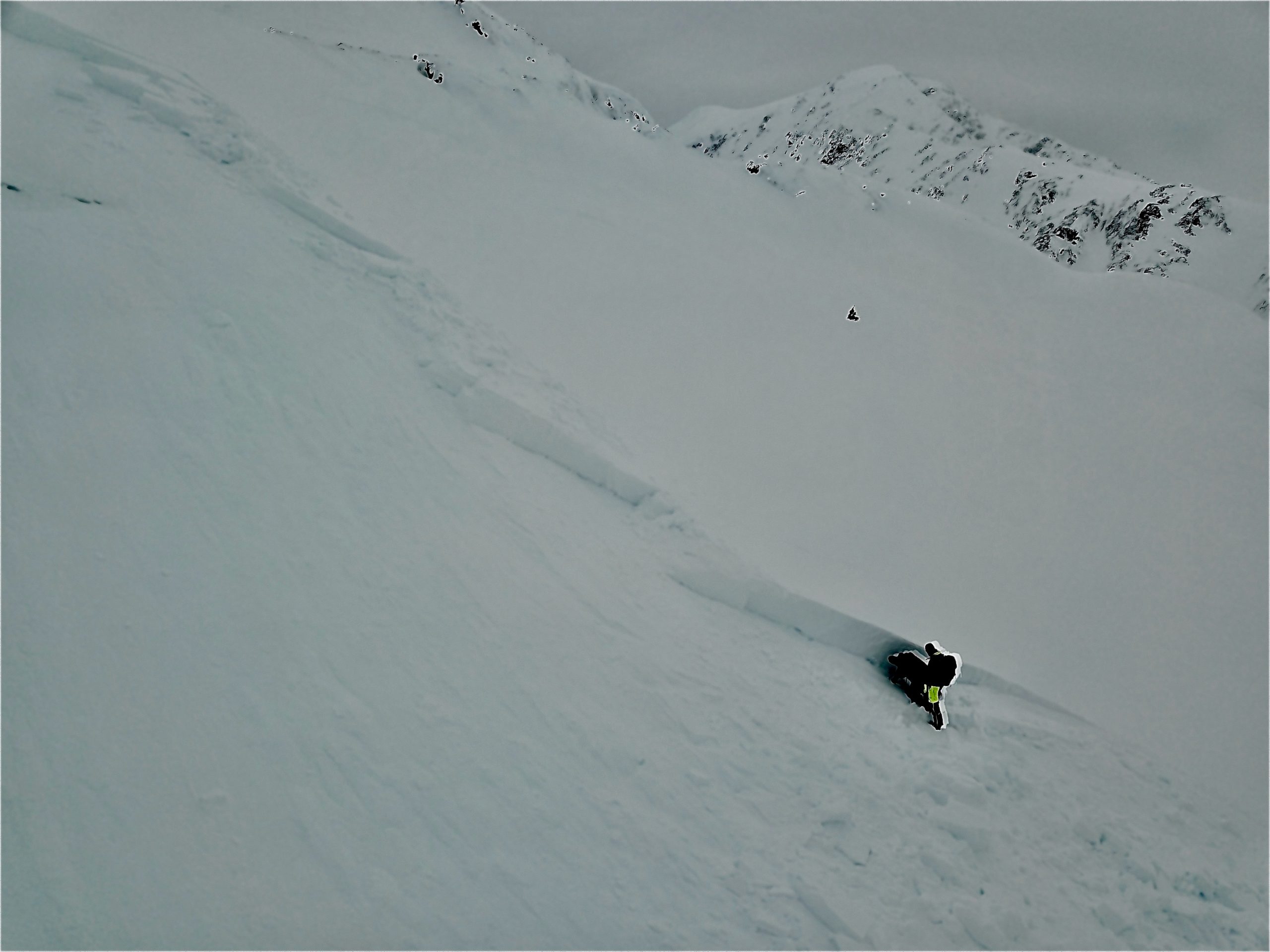 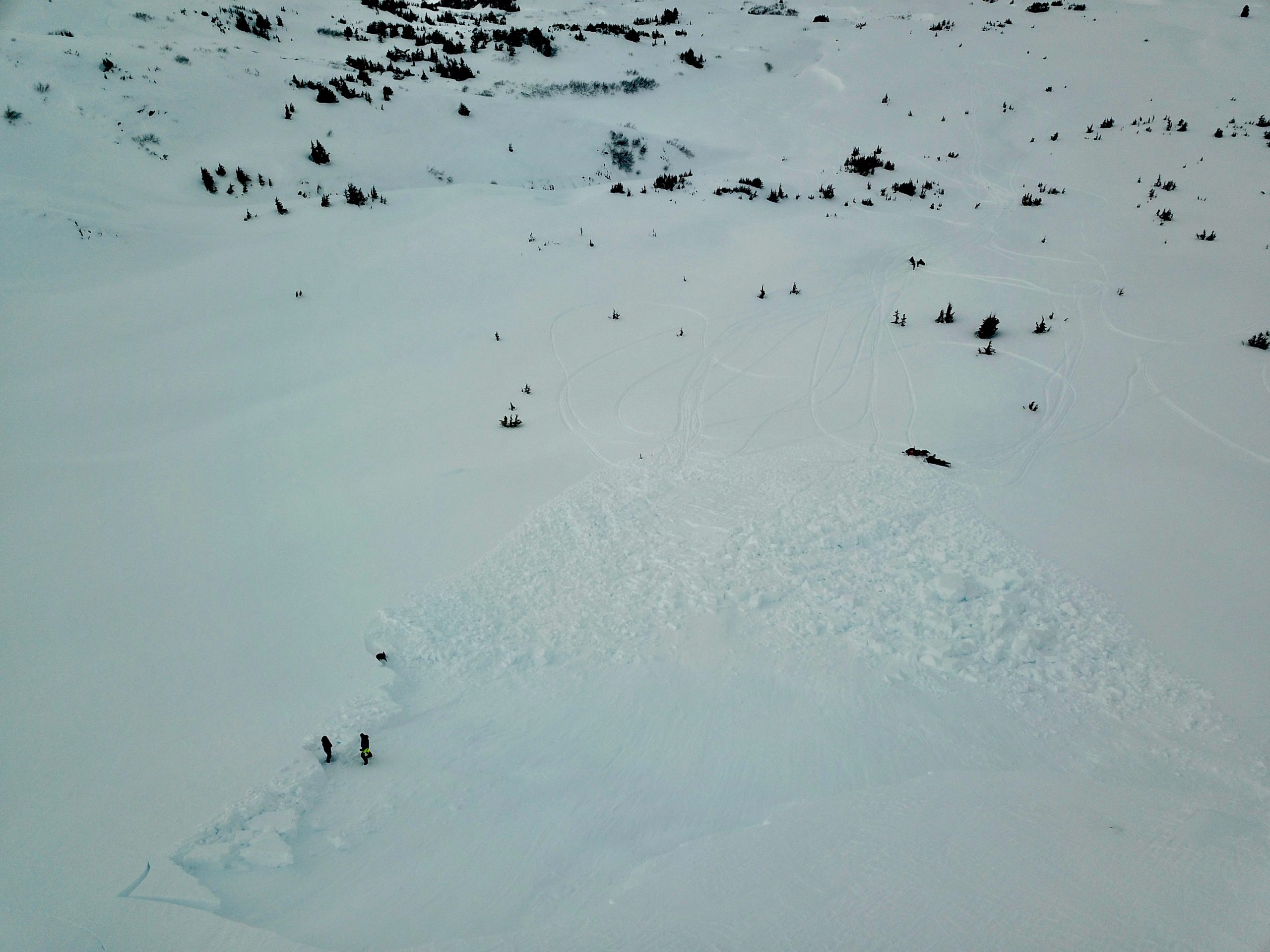 Looking down the slope 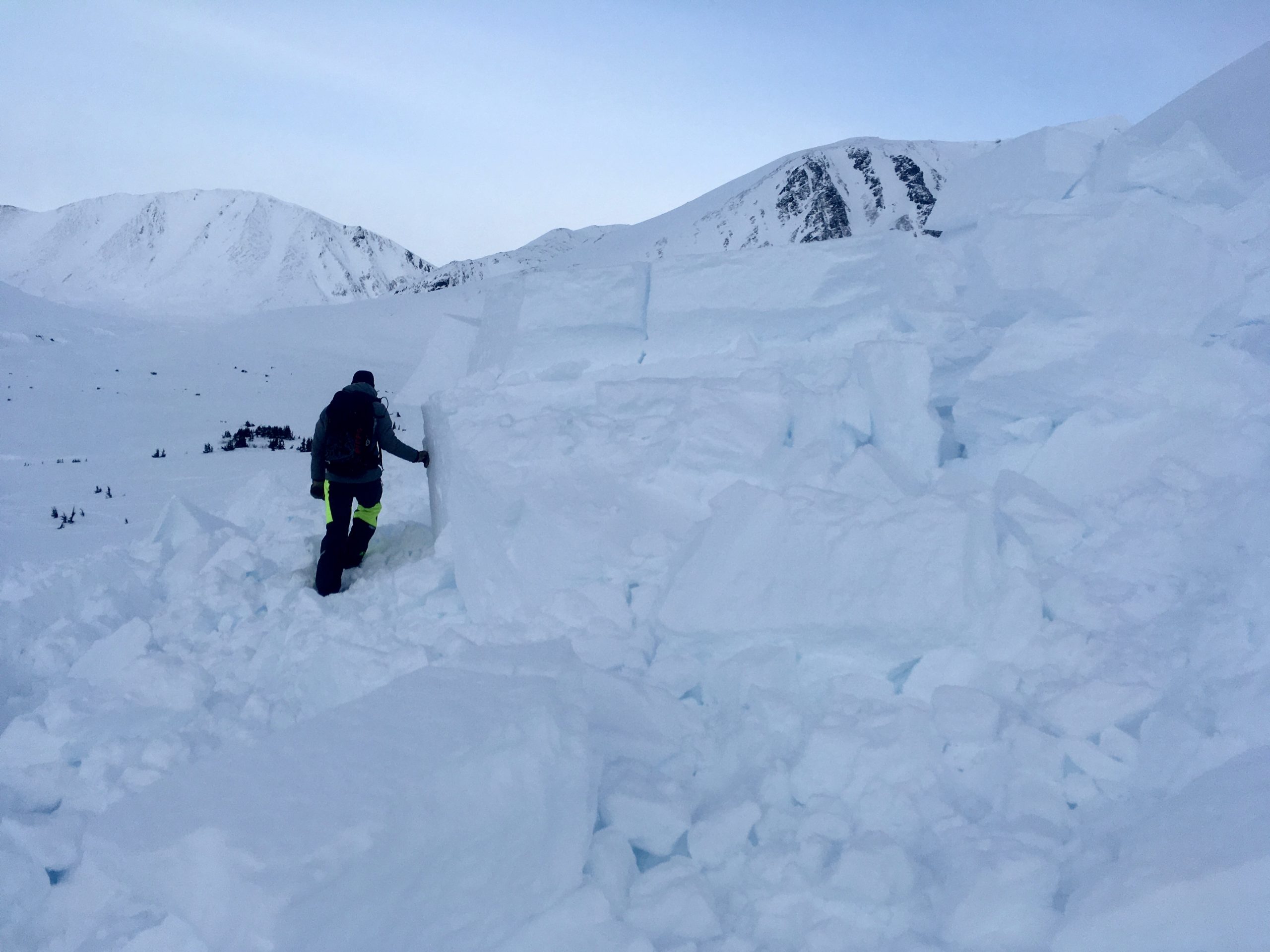 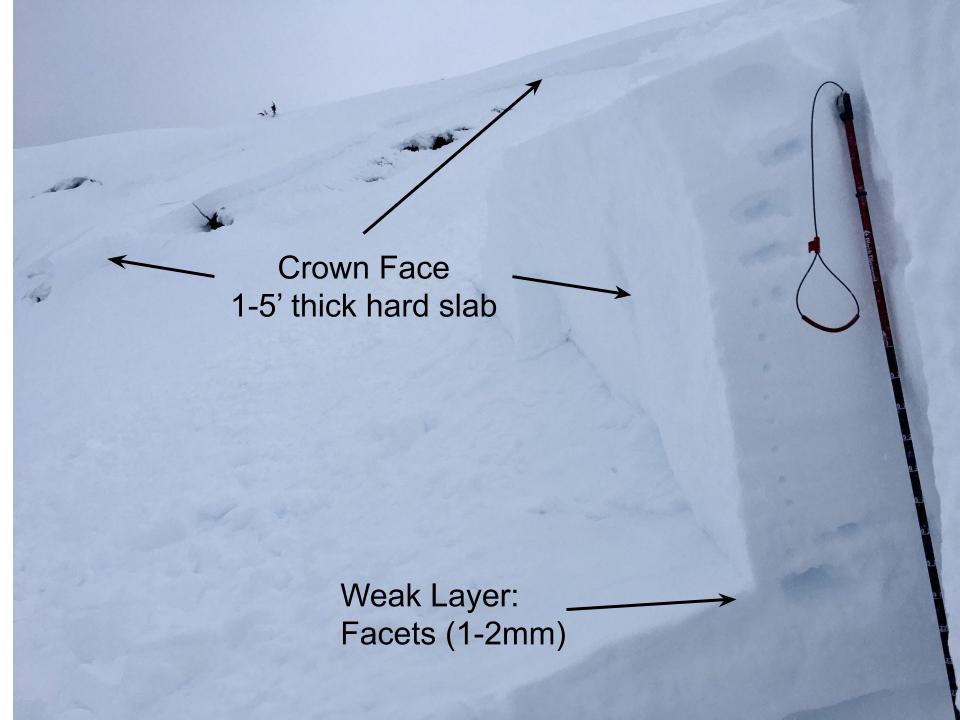 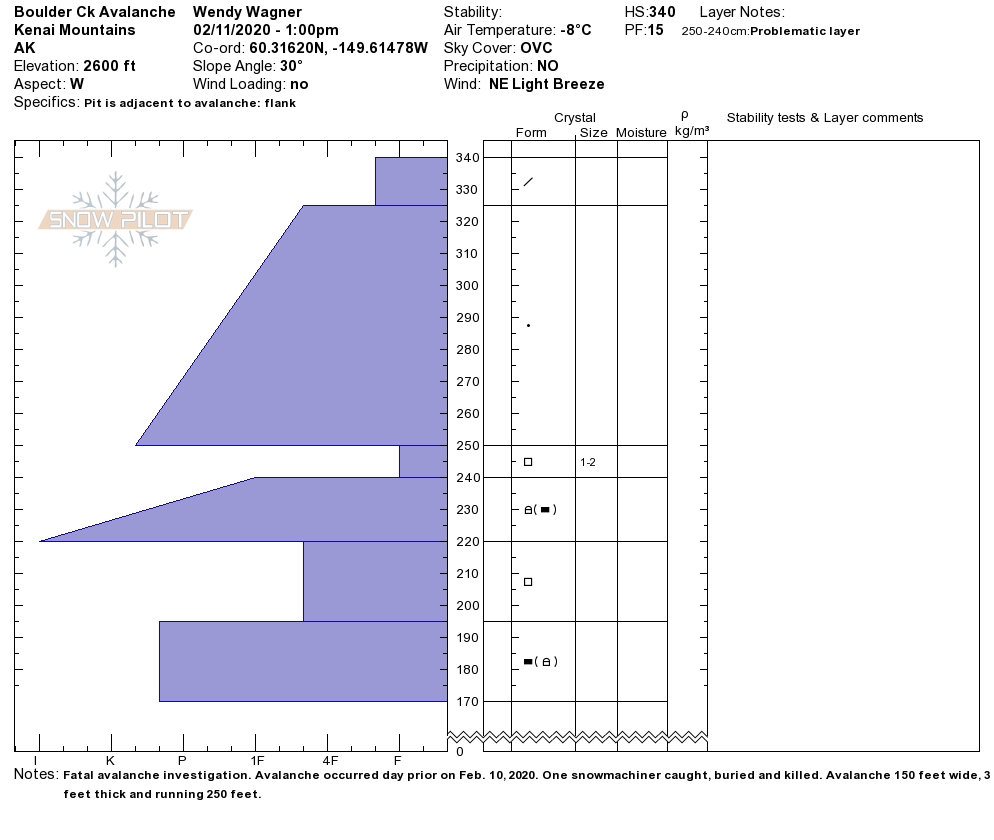 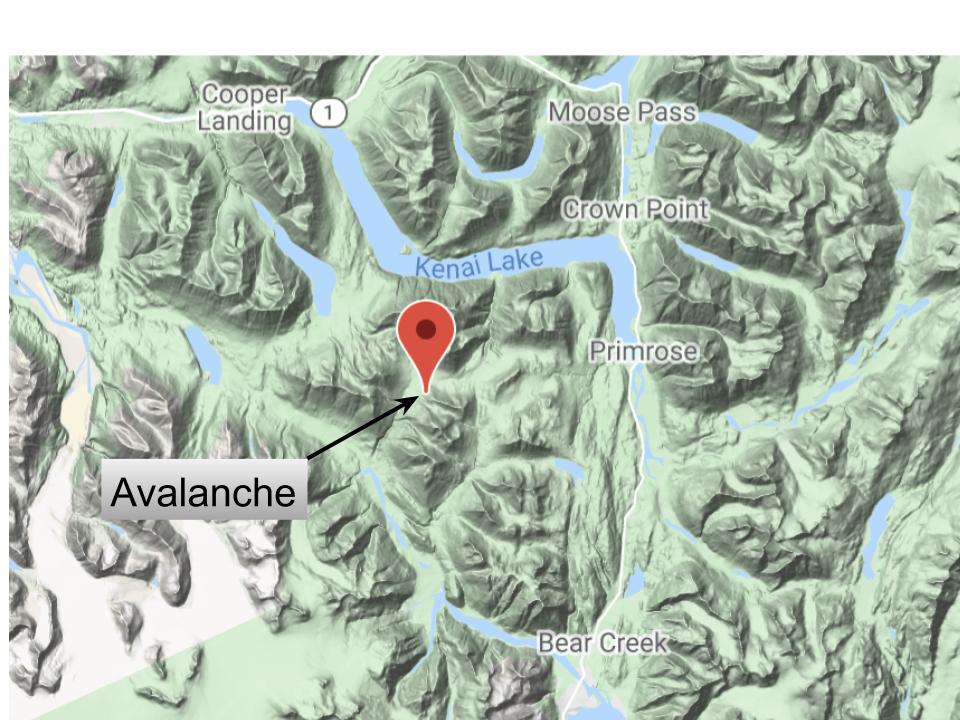 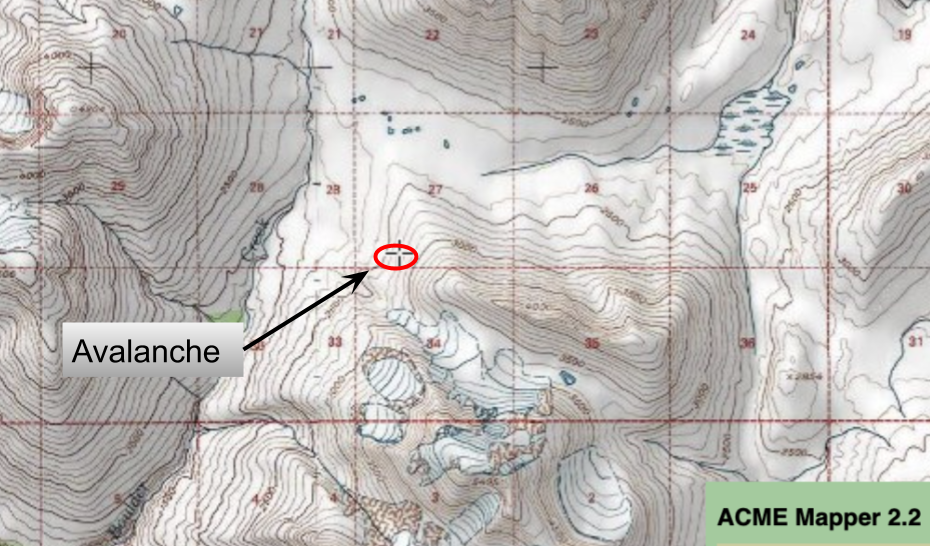 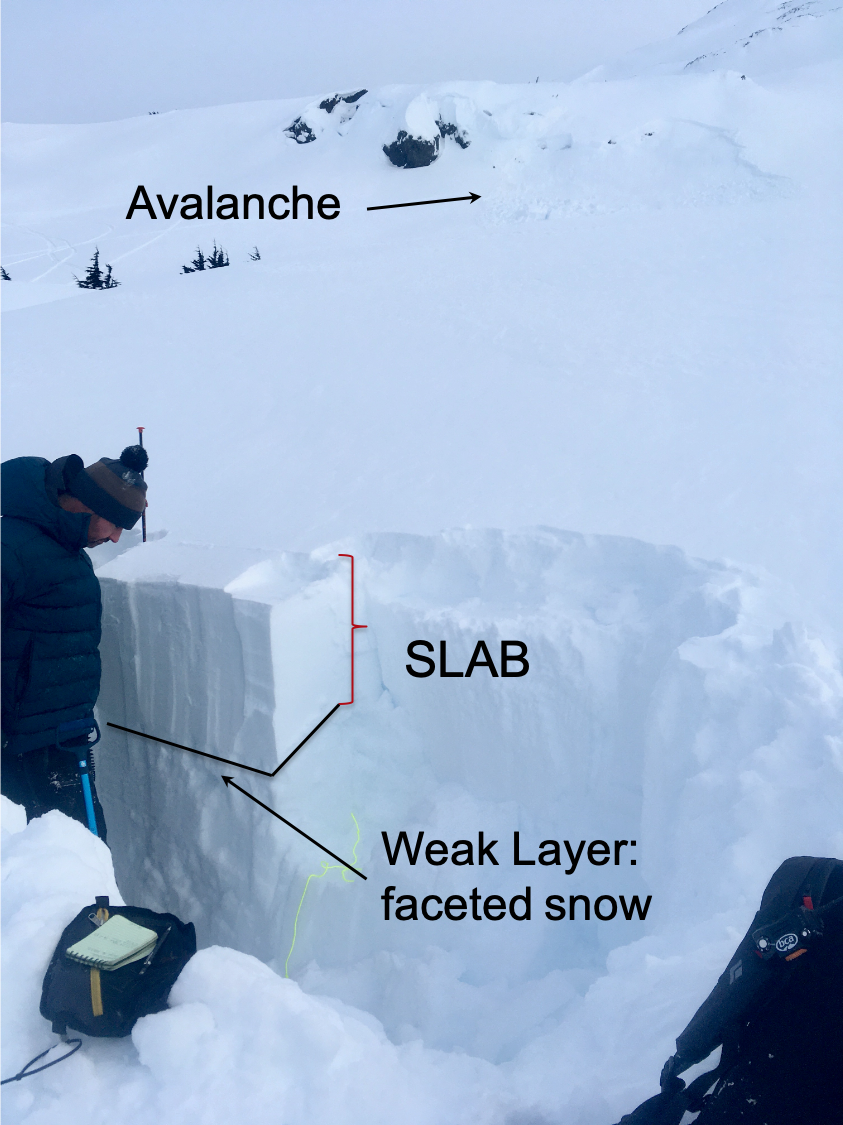 Snowpit dug near avalanche in an area with a thinner slab and slightly less wind affected. 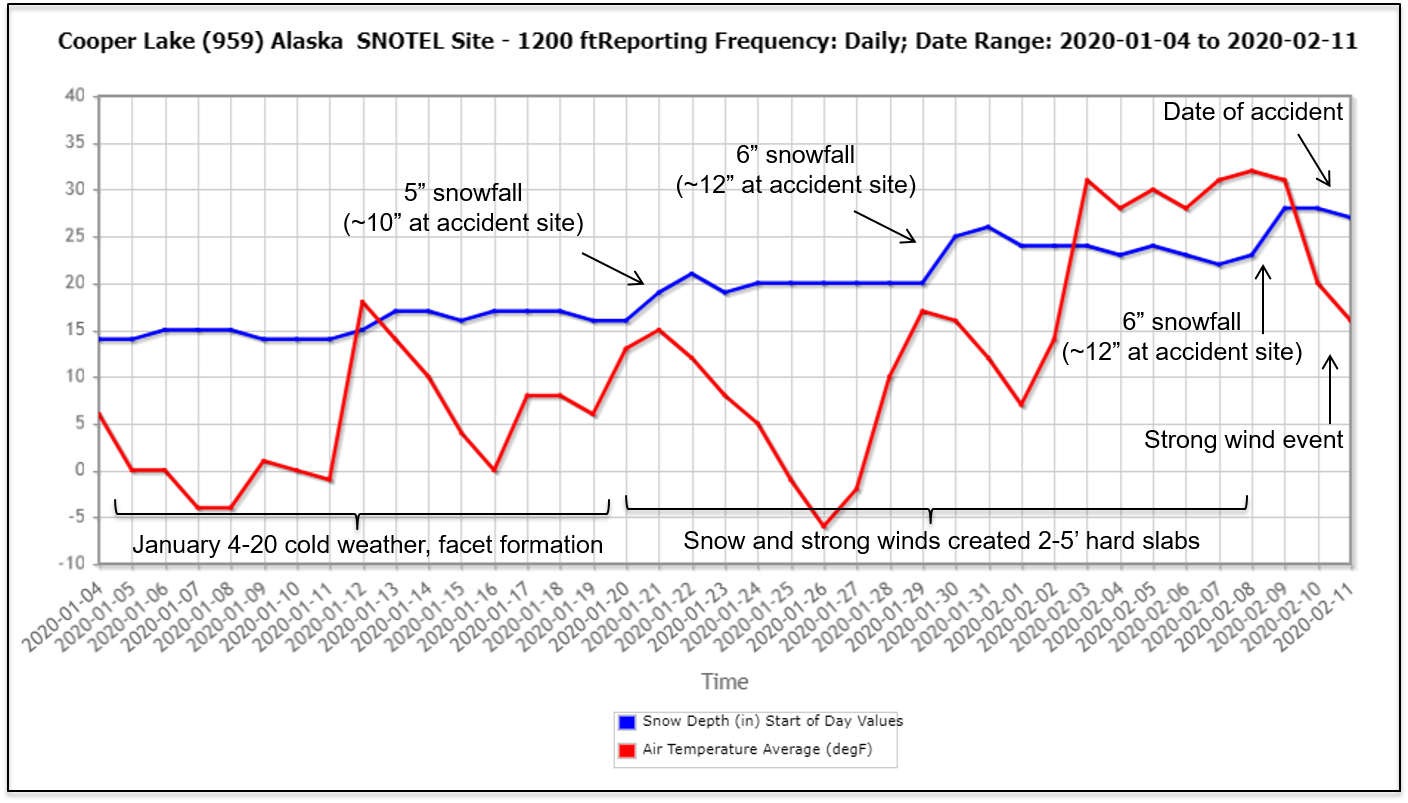