In the spring of 1952, at the end of the Seward Highway’s first winter season, an avalanche crossed the road a few miles north of Girdwood.  At least a half-dozen cars were blocked by it.  Several people got out to walk around and inspect the debris.

It must have been a curious and amazing sight – a 100-foot-long pile of dense snow, slopped on the road like a spill of wet concrete.  The travelers probably had no inkling that their new road to the Kenai Peninsula crossed nine miles of dangerous avalanche terrain.  That the Alaska Railroad tracks already had been buried dozens of times.  That at least four people had been killed in earlier decades.  That they were standing, right then, in the bull’s eye of the run-out for another avalanche.

Without warning, the slope above them let loose.

“We all saw it coming,” Oliver Backlund told the Daily News later that day. “We didn’t know where it was going to land.”

It roared off the mountain with startling speed, descending thousands of feet in a few seconds.  It slammed into Backlund’s 1940 Chevy, crumpling it like an accordion.  A few yards away, the churning snow caught an Anchorage man trying to flee, swept him off the road and buried him.

Thorvald Thomsen, 37, died later that night in the hospital at Elmendorf Air Force Base.  A former city worker and caretaker at the cemetery, Thomsen had been trying to hitch a ride to Girdwood with Backlund.

Thomsen’s death defines the Seward Highway avalanche nightmare.  Though no one else has died in this way since, dozens of others have been in vehicles caught or almost hit by avalanches.  Combine those accidents with the hundreds of times snow has buried asphalt, and the Seward Highway may present the most extreme avalanche danger of any road in North America. 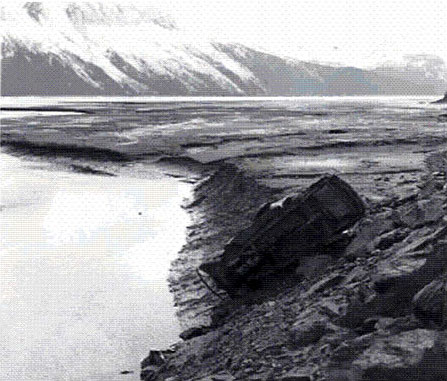