Date
Wed, April 28th, 1920
Activity
Other
Fatalities
6
Summary
Six railroad workers lost their lives when an avalanche swept down what is now called the "Holiday" slide path. The path sits around 2 miles north of Girdwood above the Seward Highway.
Accident Report

“Early records of avalanches include an accident that occurred two miles north of Girdwood on April 28, 1920 when six railroad workers were killed by a secondary avalanche while removing debris from a previous snow slide (AMSC, 2003).”
By Matt Murphy in his study ‘History of Avalanche Work on the Seward Highway‘.

A news article, copied below, written the day after the avalanche speaks to 3 workers who lost their lives, while later records speak to six workers.

Hurled Into Turnagain Arm And Buried By Snow And Slush While Working Near Mile 76
Victims Of Slide Compelled To Remain In Icy Water Half Hour Before Rescued By Acts Of Heroism – With Board On Ladder As Raft One Man Saves Comrade – Victims Ran Wrong Way When Signal Was Given.

Three men are known to be dead and buried beneath tons of snow and slush ice in Turnagain arm near Mile 76, and seven others were injured at about 4 o’clock Wednesday afternoon when a snowslide 100 feet wide swept down the mountain onto a party of some 100 men.

At the time of the accident the men were digging out a previous heavy slide.

Those missing and probably dead are as follows:

Two of the dead were found at 10:30 this morning and are supposed to be Egelzian and Rudeen.

All the above, with the exception of Chief Nicholi, Jr., are in the hospital. Dr. Beeson expressed the belief that none of the hospital cases were serious unless pneumonia set in as a result of exposure.

Immediately after the injured men had been cared for at the hospital in Anchorage, a relief and searching party was taken out, accompanied by Col. Mears and Assistant Chief Engineer William Gerig. The train left Anchorage at 3 a.m. and by 10:30 the two victims had been located ad search was being conducted for the third man, supposed to be Romero.

Among the miraculous rescues were those of John McMahon and John B. Jackson, who after being rolled and buried in slush and snow, managed to climb upon cakes of ice, where they were compelled to remain shivering in wet clothing for half hour. With improvised rafts and ropes the rescuers succeeded in dragging them ashore.

Another marvelous escape was that of an unknown man, who after being buried some distance from the shore, managed to dig out and make his way to a nearby camp.

Details gathered from survivors said a crew of 100 or more men were engaged in digging out a slide about 100 feet wide at the point of accident, some 500 feet north of the snow sheds. A watchman had been stationed to signal if an additional slide started. During the progress of the work several slides came down, and obeying the warning the men ran for the tide flats in Turnagain Arm.

When the fatal slide started a signal was given to the men to run north, the tide having come in and the flats being submerged.

Everyone rushed away, all escaping save the three men killed and those rescued later. Among those who make a miraculous escape was Chief Nicholi, Jr., who was employed in Section Foreman Holmes’ gang No. 88. In detailing his experience he said:

“We had been warned to run north if a slide was signaled. I started with the rest, but was caught and buried about three feet beneath the snow and rolled over. I managed to dig out and found that my only injury was three cut fingers. I was unable to assist in the rescue, but watched the men that were swept away into the Arm. I saw two on cakes of ice. One started to swim ashore, but owing to the slush and ice was unable to travel far, and I saw him drown. With rafts and ropes the rescuers managed to  reach the others. The men on the ice were carried some 200 yards from shore.”

J. Golden, who escaped the slide and assisted in the rescue, corroborated Nicholi’s account and said:

“Owing to the lack of materials and the difficulties under which the men worked it required considerable time to drag the injured form the ice. We gathered cross ties and ladders and used them as a raft, finally getting ropes to them. A party of soldiers who had been assisting in digging out the first slide, were taken off last night, or the casualty list would doubtless have been longer. We counted some eight or nine on the ice and snow in the arm, and rescued all but one man, who left his refuge and tried to swim ashore. At the time he gave up he was calling out, and appeared to be injured. He had proceeded but a short distance when he was seen to throw up his arms and sink. It was impossible to get to him. It seems all the men directly in the path of the slide were swept away. The slide traveled farther than the previous ones and it was impossible for the men to get away, owing to the tide being in.”

Further details of yesterday afternoon’s fatal snow slide were received from the Alaskan Engineering officials at noon today as follows:

The slide occurred at 3:30 just north of the snow shed at Mile 76. Men were working in conjunction with the big government rotary and crew clearing away the slide which occurred Monday.

In order to prevent disaster a reliable man was placed as lookout to warn the workmen of further slides which were likely at any time on account of the warm weather. The men were scattered at various places while performing work. The lookout seeing the fatal slide coming gave the signal agreed upon and many of the workers easily escaped. A gang of about fifteen working apart either misunderstood the signal or became excited and deliberately ran into the slide. It is understood that if the men had run the other way or even stood still they would have escaped. The tools with which they were working were later discovered untouched by the slide. The slide is estimated to be over 600 feet long and 20 to 40 feet deep. Wm. Gerig, of the Alaskan Engineering commission, advises The Times that as large a force of men as can be worked to an advantage will be used to clear the track for resumption of traffic. Mr. Gerig states that despite the effort to clear the track that it will be at least four days before the obstruction will be removed. In the meantime all trains have been annulled.

As there is still grave danger of additional slides, Mr. Gerig advises that the men will not be allowed to work in the slide except when there is absolutely no further danger. Work will be confined between the hours of 2 and 8 a.m. at the time the snow is solid and work can be carried on free from danger.

This morning Judge David went to the Egelzian cabin and made a search for papers and valuables. Approximately $1,500 in securities were found, including some $700 in saving stamps, $100 in liberty bonds and $500 in postal savings.

A telephone message to the hospital this afternoon elicited the information that all the survivors of the accident were progressing nicely and there was no rise in temperature indicating the possibility of pneumonia. Some are bruised, but it is the belief that they will all be out within a few days. 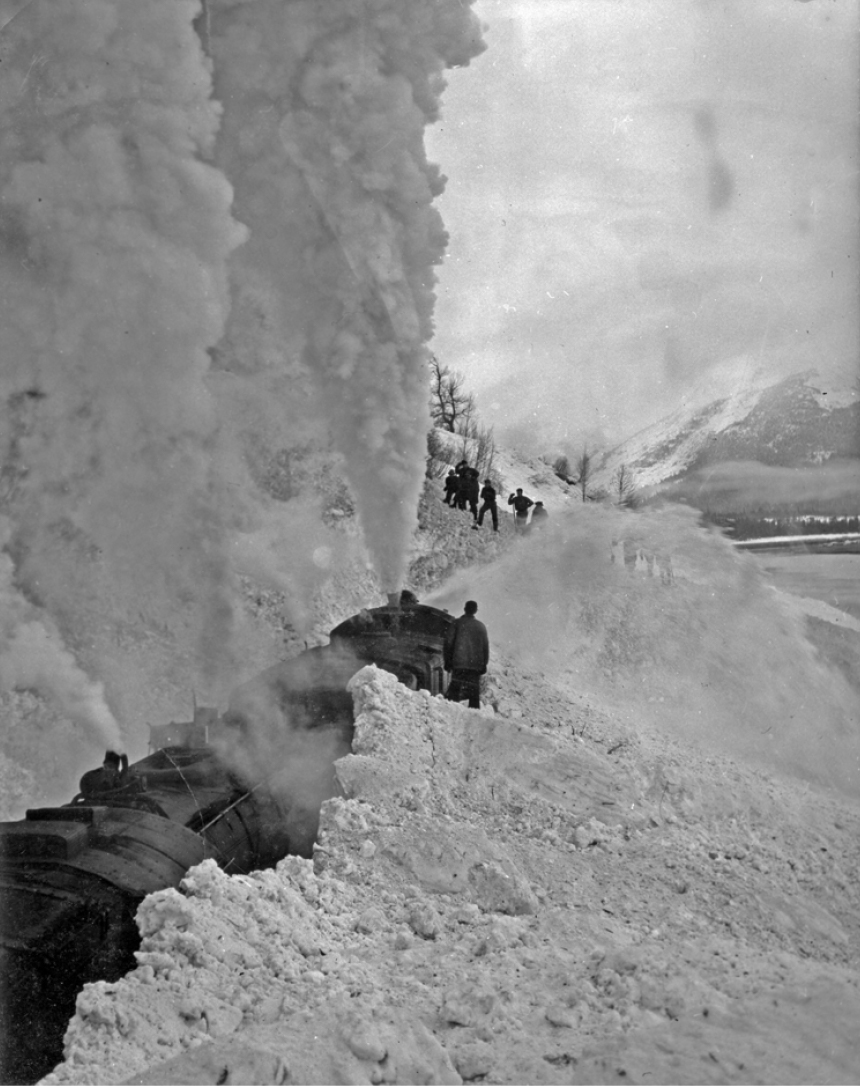